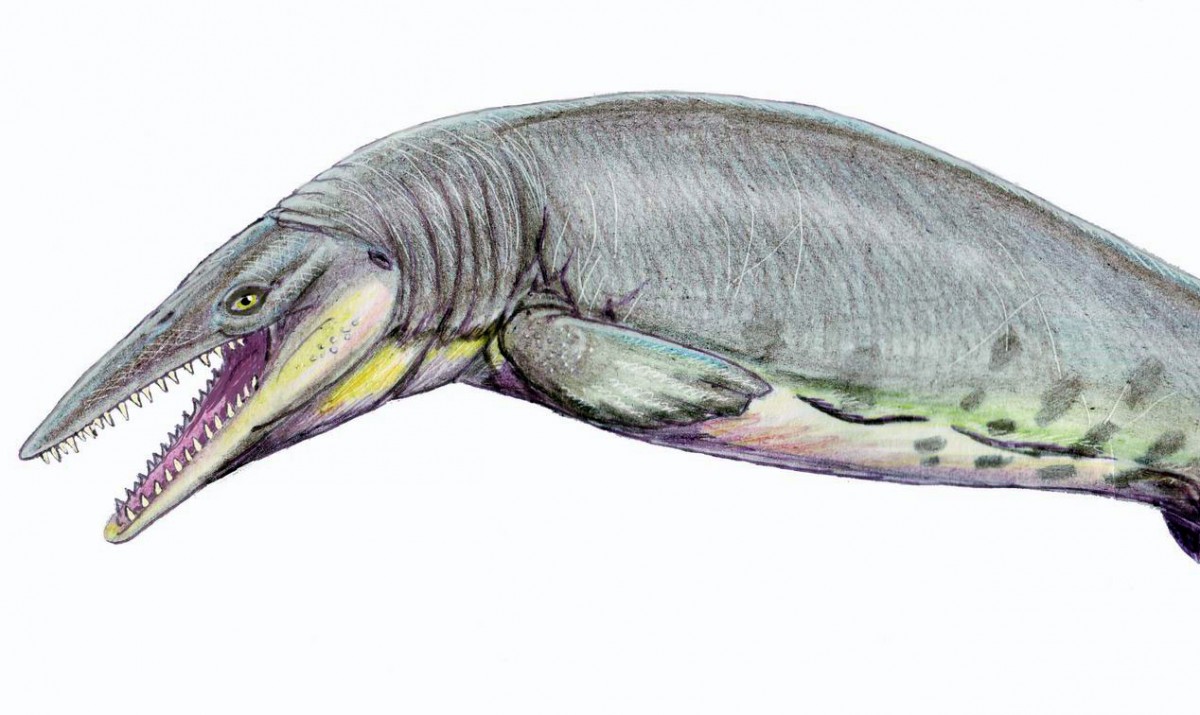 Kaikaifilu is a new species of giant sea lizard (mosasaur) discovered in 66 million year-old rocks of Antarctica. At about 10 m long, it is the largest known top marine predator from this continent. It lived near the end of the dinosaur age, when Antarctica was a much warmer ecosystem, and fed on filter-feeding marine reptiles.

Because of its harsh conditions, Antarctica is probably one of the toughest places to work for palaeontologists. However,  precisely because of this, information is scarce, and new discoveries can be highly rewarding. In 2010, an expedition of Chilean scientists to Seymour Island encountered particularly bad weather. Only during their last days in the field, after dreadful walks through knee-deep mud, they made a truly exciting discovery in 66 million year-old rocks: The fossil remains of a particularly large skull of a Mosasaur, a giant sea lizard.

Mosasaurs were not dinosaurs, but close relatives of modern-day lizards, that thrived in the seas during the Cretaceous period of the dinosaur age. Unlike modern lizards, however, mosasaurs evolved paddle-like limbs, and a long, deep tail for swimming. Some of them were top predators that attained truly gigantic size, like the fearsome Tylosaurus (regularly featured in books of prehistoric animals). Prior to this find, the largest known mosasaur from the Antarctic continent was represented by Taniwhasaurus antarcticus, a predator with a skull about 70 cm long. Interestingly, the new species is found to be a 5 million year younger, close relative of Taniwhasaurus. It is also a close relative of the the North American Tylosaurus, however, the new Antarctic mosasaur lived ca. 20 million years after, in the opposite Hemisphere.

Its skull is estimated to be a about 1.2 m long, being the largest southern mosasaur to date, suggesting a body length close to 10 mts. And while it is similar to north American giants like Tylosaurus, it shows other completely unique traits, that justify a new scientific name. The scientists called it Kaikaifilu hervei after the cosmology of the Mapuche, the native people from southern Chile and Argentina. Kai-Kai filú is the almighty giant reptile owner of the seas, rival of Treng-Treng filú, the land reptile, both creators of the lands through their continuous fight that causes the earthquakes, volcanoes, tsunamis and all the events that shaped the earth where we live. The species name hervei is after Dr. Francisco Hervé, a world-renowned Chilean geologist and pioneer earth-science Antarctic explorer.

According to Rodrigo Otero, one of the authors of the study, “The increasing diversity of endemic Cretaceous marine reptiles in the southern hemisphere are slowly changing an historical paradigm. Since the 19th century many southern fossil reptiles had been assigned to species from the northern hemisphere. In this sense, Kaikaifilu adds to this paradigm shift. The southern record has scarce informative mosasaur skulls, most of them found in New Zealand. However, in southern South America and Antarctica, mosasaur remains are especially scarce. Hence the relevance of the new specimen, which shows a distant kinship with respect to the northern hemisphere mosasaurs”.

Previous to the discovery of Kaikaifilu, isolated teeth had been frequently found in Late Cretaceous rocks of Antarctica. Anatomical features led scientists to refer them to several mosasaur species previously known in the Northern Hemisphere. Remarkably, the jaws of Kaikaifilu now reveal that many of these teeth co-existed as different tooth types in the mouth of this species, a condition known as heterodonty. Therefore, in all probability, the diversity of Antarctic mosasaurs has been overestimated. The case nicely illustrates the difficulties that palaeontologists may encounter when discovering unique but isolated body parts.

During the dinosaur age, antarctic climate was much warmer and the continent harboured a diverse ecosystem, that included several unusual reptiles. Kaikaifilu probably fed on an abundant “buffet” of contemporaries, especially the unique aristonectine plesiosaurs, robust, long-necked forms that did not feed on fish but rather were filter-feeders of much smaller prey, using fine, narrow teeth and whale-like adaptations in their skulls.

“Prior to this research, the known mosasaur remains from Antarctica provided no evidence for the presence of very large predators like Kaikaifilu, in an environment where plesiosaurs were especially abundant. The new find complements one expected ecological element of the Antarctic ecosystem during the latest Cretaceous” says Otero.

These ecosystems existed shortly before the ultimate demise of the dinosaurs, a time in which temperatures and sea levels experimented significant changes. Scientists continue to discuss how these changes may have affected extinction and evolution in these southernmost marine ecosystems. Without a doubt, they will continue to explore for new data as Antarctica, an entire continent.