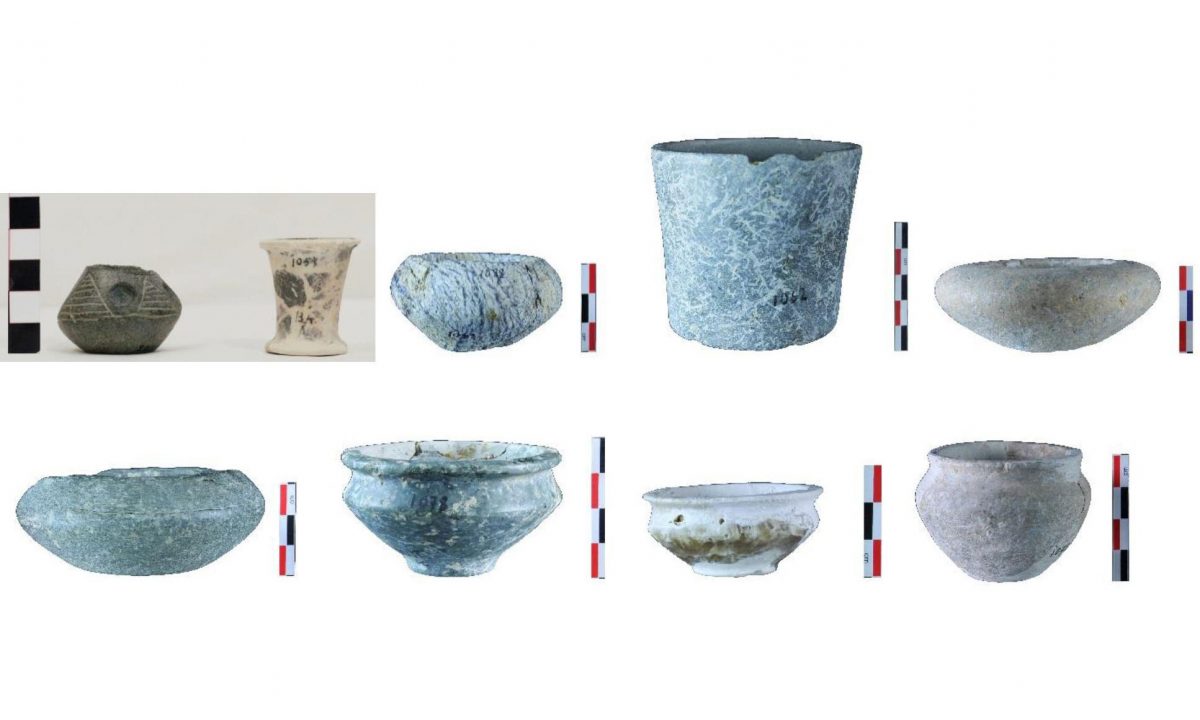 An in-depth analysis of stone objects has yielded new evidence on Minoan stoneworking, with regard to the geological outcrops exploited for the production of certain objects as well as the specific stone materials used for the making of particular shapes.

A team of experts led by archaeologist Dr. Georgia Flouda (Heraklion Archaeological Museum) and consisting of researchers from the Foundation for Research and Technology (IESL-FORTH), performed a series of tests on stone objects from the Minoan Tholos Tomb B at Porti in Crete’s Mesara Plain. The results have just been published through the Journal of Archaeological Science (Vol. 32, August 2020); the article is accessible to view and download here.

The Tholos at Porti

Cretan Tholos tombs are much earlier than the more well-known Mycenaean Tholos tombs, do not relate to them, and reflect completely different socio-cultural procedures.  Found in the plain of Mesara, in south-central Crete, the Tholos tomb P at Porti dates to the Early (EBA) to Middle Bronze Age (MBA) (3rd and early 2nd millennium B.C.), (ca. 2700–1700 BCE). According to the researchers, this tomb’s material represents “one of the richest burial assemblages in south-central Crete”, reflecting in many ways the technological and ideological innovations as well as wealth characterizing what is known as Crete’s Prepalatial and Protopalatial periods.

In particular, the mortuary assemblage where the team performed its archaeometry project consists of a group of 59 stone artifacts (vessels, implements, and figurines).

As mentioned in the paper’s abstract, the analysis was based on mobile Raman microspectroscopy, a quick, non-invasive deep scanning archaeometrical method. Mineral identification was possible for over half of the objects examined and the results expand our understanding, originally obtained on the basis of visual and microscopic characterization of the objects. During the project, patterns of variability in the stones investigated are correlated with the typological repertoire of the final products and compared with data from the neighboring site of Apesokari; further inferences on craft specialization issues are finally drawn.

In all, the data obtained lead researchers to suggest that stone vessel manufacture at Porti was predominantly focused on the exploitation of local soft stone outcrops. This hypothesis agrees with the current knowledge concerning the geological formation of the Asterousia area, on the northern fringes of which the site of Porti is located.

The process “in the microscope”

In parallel, this research gave the opportunity to the team to assess and discuss the capacity of mobile Raman microspectrometry to contribute to stone object characterization as regards their mineral composition, along with the advantages and limitations of the methodology followed. Raman analysis is performed quickly, non-invasively, directly on the object and over several spots across its surface for probing heterogeneous mineral distributions. The mobile spectrometer permits measurements to be conducted on location, namely within the museum study facilities. A major limitation with respect to obtaining clean analytical information resulted from strong fluorescence emission observed in some of the measurements, which interfered with the Raman scattering signal. These emissions were attributed to organic materials present on the stone surface either as environmental contamination or as a result of previous, often undocumented, conservation treatments.

Finally, experts stressed the need to collect and thoroughly characterize local stone outcrops as well as archaeological stone objects; in so, it is stated that building a representative Raman spectral database will certainly facilitate future studies.