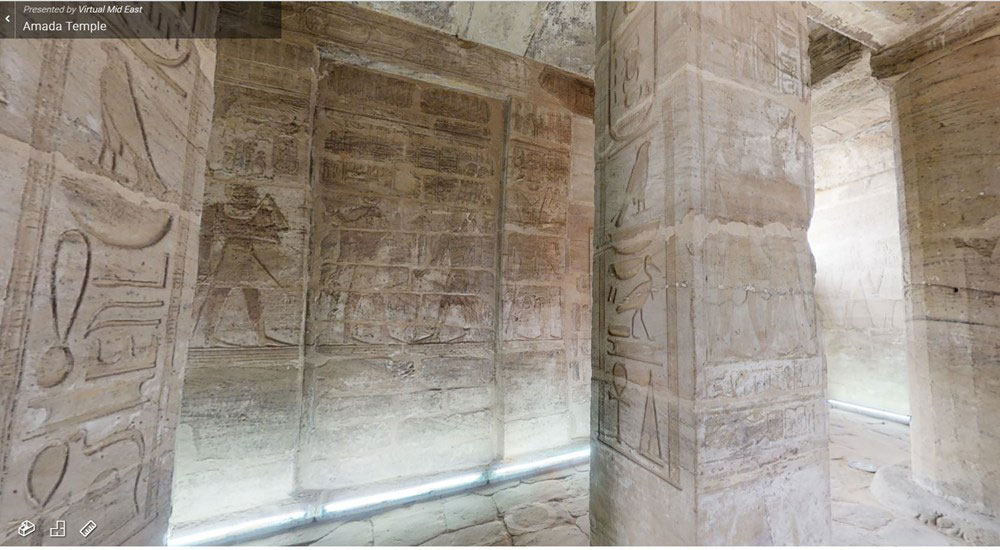 Virtual tour in the Temple of Amada, Egypt

A virtual tour in the ancient Egyptian Temple of Amada has been released by Virtual Mid East via the website of the Egyptian Ministry of Tourism and Antiquities.

Dedicated to the gods Amun and Ra-Horakhty, the Temple of Amada is one of the most important temples in Nubia to the southern part of ancient Egypt’s periphery (now the area around Egypt’s border with Sudan).

The temple dates to the mid-18th Dynasty and it is considered as one of the earliest examples of Egyptian temple architecture in the area of the Middle Nile; Kings Thutmose III (c.1479–1425 BC) and Amenhotep II (c.1427–1400 BC) built its core and King Thutmose IV (c.1400–1390 BC) continued with building the hypostyle hall at its front. Amenhotep II is also credited with the carving here of a historical text where he records his victory over enemies in Syria. During the reign of the “heretic” pharaoh Akhenaten (c.1352–1336 BC) the images of the god Amun on the walls of the temple received deliberate damage;  restoration of a lower quality took place in the early Ramesside period. Several kings of the 19th Dynasty made additions to the temple, with Merenptah (c.1213–1203 BC) also carving a text, in which he boasts of his victory over an attack on Egypt.

In the framework of the Nubian Salvage Project between 1960 and 1964, the temple was moved around 2.5 kilometers away from its original location to survive from the rising waters of Lake Nasser following the construction of the Aswan High Dam.

You can enjoy the virtual tour through the link here.