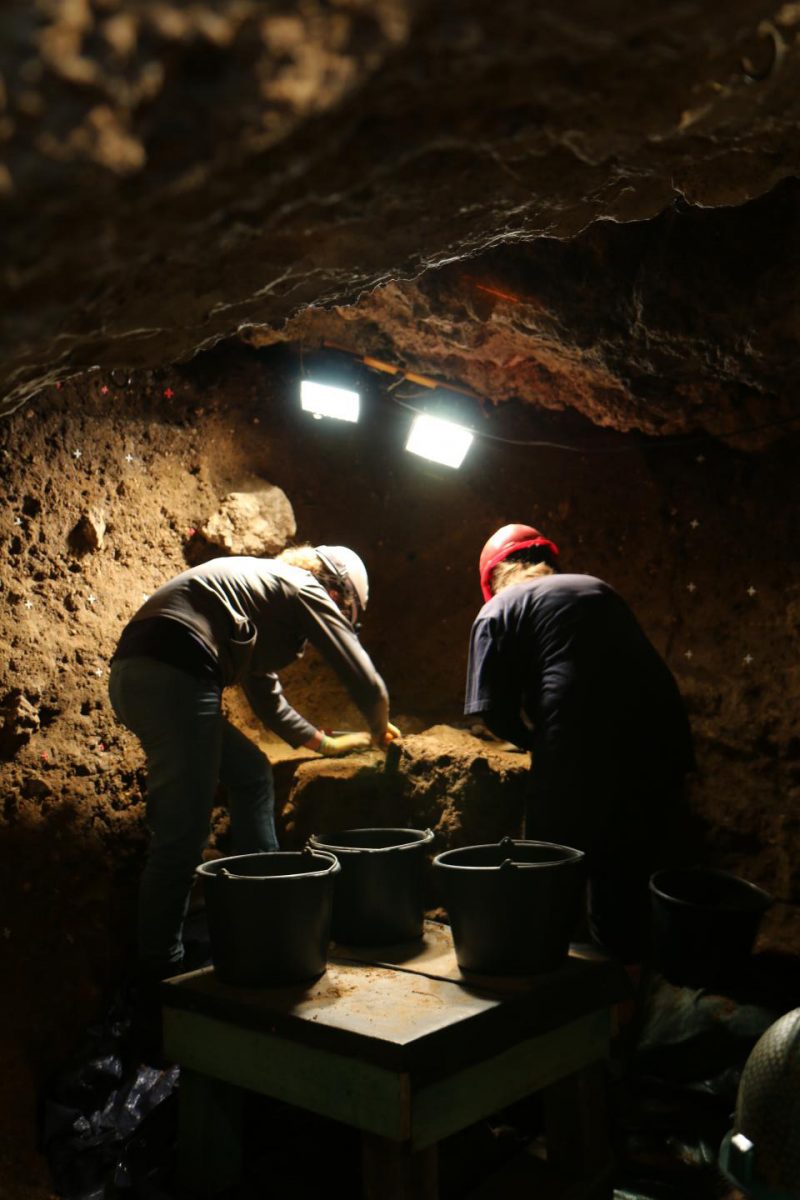 5,000 years of history of domestic cats in Central Europe

Interdisciplinary studies in paleogenetics and archeozoology

A loner and a hunter with highly developed territorial instincts, a cruel carnivore, a disobedient individual: the cat. These features make the species averse to domestication. Even so, we did it. Nowadays, about 500 million cats live in households all around the world; it is also difficult to estimate the amount of the homeless and the feral ones.

Although the common history of cats and people began 10,000 years ago, the origins of the relation still remain unknown. How was the domestication process carried out? When did the first domesticated cats appear in Central Europe? Where did they come from, and how? What was their role in contemporary people’s lives. The knowledge gaps in the topic are numerous; thus, archaeologists, archaeozoologists, biologists, anthropologists as well as other researchers all around the world cooperate to find answers to the questions. Scientists from the Institute of Archaeology at the Nicolaus Copernicus University in Torun have outstanding merits in this field. An article discussing significant research achievements in the area has been published in PNAS, a prestigious official journal of the National Academy of Sciences. The first author is Dr Magdalena Krajcarz who has made an attempt to find ancestors of domestic cats in Neolithic Central Europe. By analyzing cat diet, she is trying to check how close they cohabitated with people

Winding paths of the domesticated cat

According to the assumptions made, the deliberate creation of a breed which involved selecting particular individuals, cross-breeding and reproducing them, took place relatively recently, in the 19th century. In Medieval Poland, cats were not as popular as we could think. According to evidence provided by researchers, semi-domesticated weasels, or even snakes, were used to protect grain crops against rodents. These were people who settled in towns founded in the second half of the 13th century who increased the popularity of cats.

It does not mean, however, that cats had entered into no relations with people even earlier. The first, best-documented domesticated cat remains on the territory of Poland date back to the beginnings of our era. The animals are believed to have spread across Central Europe mainly due to the influence of the Roman Empire. Nonetheless, the earliest cat remains in the area date back to even 4,200-2,300 BC and evidence the first migrations of the Nubian cat which originally inhabited the Near East and North Africa. This particular species is considered as the ancestor of domestic cats in Central Europe.

The Nubian cat is one of wildcat subspecies (next to the European wildcat which is not the domestic cat ancestor even though it is able to cross-bread with it) whose domestication began in the Fertile Crescent ca. 10,000 – 9.000 years ago. In archaeological excavation sites in Anatolia, Syria as well as Israel, a variety of stone figurines representing those cats has been found. Apparently, cats stayed in the proximity of the first farmers and, with high probability, the Neolithic Age is when the first human-cat interrelations were initiated. People gave up nomadism in favor of sedentary life and started to gather eatables which, consequently, attracted rodents of many kinds. This could result in attracting wild cats to easily achievable food sources and the benefits turned out to be mutual. With much likelihood, cats remained rather neutral to people.

Cat skeleton analyses, together with the mammal iconography, allow researchers to make an assumption that cats reached Europe migrating from the Near East, through Anatolia, Cyprus, Crete, Greece, to Ancient Rome, where they were taken over by Celts and Germans .

Cat diet vs the history of domestication

The role cats played in Late Neolithic Poland is not clear since scientists have little evidence of these animals presence. The remains found come from caves rather than from human settlements which means that cats not necessarily had to be buried by men. They could as well be pray to other predators or they simply lived and died in caves. Nevertheless, researchers do not reject the hypothesis which says that the animals could be kept by men in order to protect crops from rodents, and thus, benefit from their skills, and occasionally follow them to the caves which contemporary people used as shelters.

Research performed by Dr Magdalena Krajcarz helps to resolve the mystery. In the article entitled Ancestors of domestic cats in Neolithic Central Europe: Isotopic evidence of a synanthropic diet published in PNAS, she provides an insight into cats diet in order to determine how close human-cat relations were.

To carry out studies, six Neolithic cat remains of the Near East characteristics from four cave sites in the Kraków- Czestochowa Upland (southern Poland) were used. Nearby, there used to be farmer settlements located on fertile soils. Moreover, four European wildcat remains from an analogous period and area as well as three Pre-Neolithic and two others from the Roman Period were examined. The reference material additionally covered human and other animal remains.

Analyzing stable carbon and nitrogen isotopes in bone collagen constituted the methodological basis. The stable isotope analysis method is a commonly applied tool in the paleontology and ecology of animals because the isotope composition of their remains reflects the isotope composition of food. According to Krajcarz, the method enables, for example, the identification of feeding habits of particular fossil animal species. In research on wild animal feeding habits, conventional techniques involve analyzing food remnants in faeces or stomachs, which imposes significant limitations. Most importantly, not all the remnants can be identified. Moreover, the remnants are from the last feeding. Finally, the access to such fossil material is very poor.

Owing to the isotope analysis, taking accurate chemical measurements as well as recognizing average diet covering the whole animal lifespan are possible. Primarily, the method allows the examination of feeding habits of animals from the past. All we have are bone tissue remnants which have survived in the unaltered state as the isotope composition of bones has been unchanged for thousands of years – says Dr Krajcarz. To simplify the issue, the Neolithic farmers were knowledgeable enough to apply fertilizers such as dung or plant ash. Rodents which fed on the collected crops were consumed by cats. By the stable isotopes examination we are able to decide whether contemporary cats found food taking advantage of human activity somehow.

So, what are the conclusions drawn by the researchers? According to the examination results, the Near East cats were not fully dependent on men. They made use of all the available food sources, but could also find others in their habitat. They could do it periodically, either benefiting from human activity or hunting individually in forests. Thus, they maintained their independence.

As Dr Krajcarz explains, their findings confirm the hypothesis that the Near East wildcats have spread across Europe accompanying the first farmers, probably as commensal animals. The results of the stable isotope analysis obtained for the Roman Period cats. however, seem to resemble those of men and dogs which suggests that cats followed a similar diet, i.e. they benefited from human resources or were possibly fed by men. Also, the development in farming partially influenced our native European wildcat, even if it was more forest resources oriented.

On the track of the cat history

Dr Magdalena Krajcarz and Prof. Daniel Makowiecki from the Institute of Archaeology at the Nicolaus Copernicus University are continuing their research on the history of domestic cats. Together with a team of paleogeneticians supervised by Dr Danijela Popovi? from the Warsaw University, they are initiating a new research project, 5,000 Years of History of Domestic Cats in Central Europe: an Interdisciplinary Paleogenetic and Archaeozoological Study funded by the National Centre of Science. The project will be based on the international cooperation with researchers representing European institutions including Belgium, Serbia, Lithuania, Slovakia, and the Czech Republic.

The main aim of the four year project is to reconstruct migration trails of domestic cats from their domestication regions to Europe and look for traces of the cat genome selection, natural and/or controlled by men. The research team is planning to analyze hundreds of cat bone remains from archaeological and paleontological sites. In the interdisciplinary project, conventional archaeozoological and paleontological morphometric methods as well as fossil DNA analysis and radiocarbon dating will be employed.

The researchers wish to trace all the phenotypic and genetic changes in cats which are responsible for domestication (aesthetic: size, coloration; behavioral: reducing aggression; physiological: adopting to digest anthropogenic food, e.g. milk, starch).

On the basis of the genomic data, they want to estimate the cross-breeding intensity of the Nubian cat and the European wildcat in order to check whether it increased together with the domestic cat population expansion.