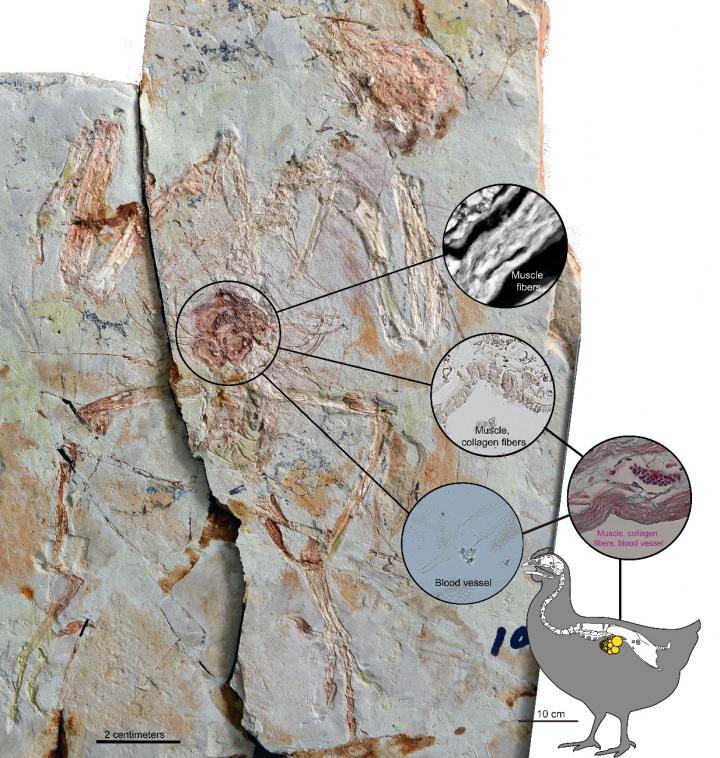 Palaeontologists prove bird ovary tissue can be preserved in fossils

A research team led by Dr. Alida Bailleul from the Institute of Vertebrate Palaeontology and Palaeoanthropology (IVPP) of the Chinese Academy of Sciences has put one controversy to rest: whether or not remnants of bird ovaries can be preserved in the fossil record.

According to the team’s study, the answer to the question is “yes, they can.”

The Early Cretaceous Jehol Biota is known for its exceptional avian fossils, which include thousands of nearly complete skeletons preserved fully articulated and often with associated soft tissues. Most commonly, feathers are preserved, but rare traces of organs are also sometimes fossilized.

In 2013, a group of IVPP scientists described several early bird specimens, which they interpreted as preserving maturing ovarian follicles (the egg yolk contained within a thin membrane prior to ovulation and eggshell formation).

The traces consisted of a single cluster of circular objects preserved on the left side of all specimens, just below the last thoracic vertebrae. This finding was particularly interesting from an evolutionary point of view, because modern birds only have one functional ovary, the left, whereas all other extant animals have – in normal circumstances – two functional ovaries.

Available fossil evidence indicates oviraptorosaurs – dinosaurs fairly closely related to birds – had two functional ovaries. This means birds lost the function of their right ovary at some point in their evolution. But when? If the interpretation is correct, it would mean that the function of the right ovary was lost very early in the evolution of birds, i.e., more than 120 million years ago.

However, these discoveries are controversial. In fact, several authors expressed their doubts regarding the validity of the original interpretation, proposing instead that these circular traces are actually the ingested remains of plants. Understanding the identity of these controversial traces is thus important for understanding reproductive evolution in birds, diet in enantiornithines and confuciusornithiforms (two groups of early birds) and the preservation potential of the Jehol Biota.

In order to explore the identity of the controversial traces, the team led by Dr. Bailleul extracted remains of the purported follicles from one enantiornithine and studied them using an arsenal of analytical methods including scanning electron microscopy, energy dispersive spectroscopy, traditional ground-sectioning techniques and histochemical stains applied to demineralized fossil tissues and extant hen follicles for comparison.

The results show that the tissues preserved in the fossils are virtually identical to the tissues surrounding developing egg yolks in extant birds. More precisely, Dr. Bailleul demonstrates that the fossil traces partially consist of a contractile, muscular and vascularized structure that expels follicles during ovulation (the chordae). Remnants of smooth muscle fibers, collagen fibers, and blood vessels were identified, features all consistent with the original interpretation and incompatible with the ingested seed hypothesis.

Although Dr. Bailleul has only tested one specimen with purported ovarian traces so far, these results prove that ovarian follicles can be preserved in fossils more than 120 million years old and confirm that at least some enantiornithines had a single functional ovary and oviduct. However, unlike modern birds, their follicles developed slowly as a function of their lower metabolic rate.

This research sets a new standard for studies on fossilized soft tissues in the Jehol, demonstrating that such traces can be studied on a level similar to that of extant tissues if they are exceptionally well preserved.