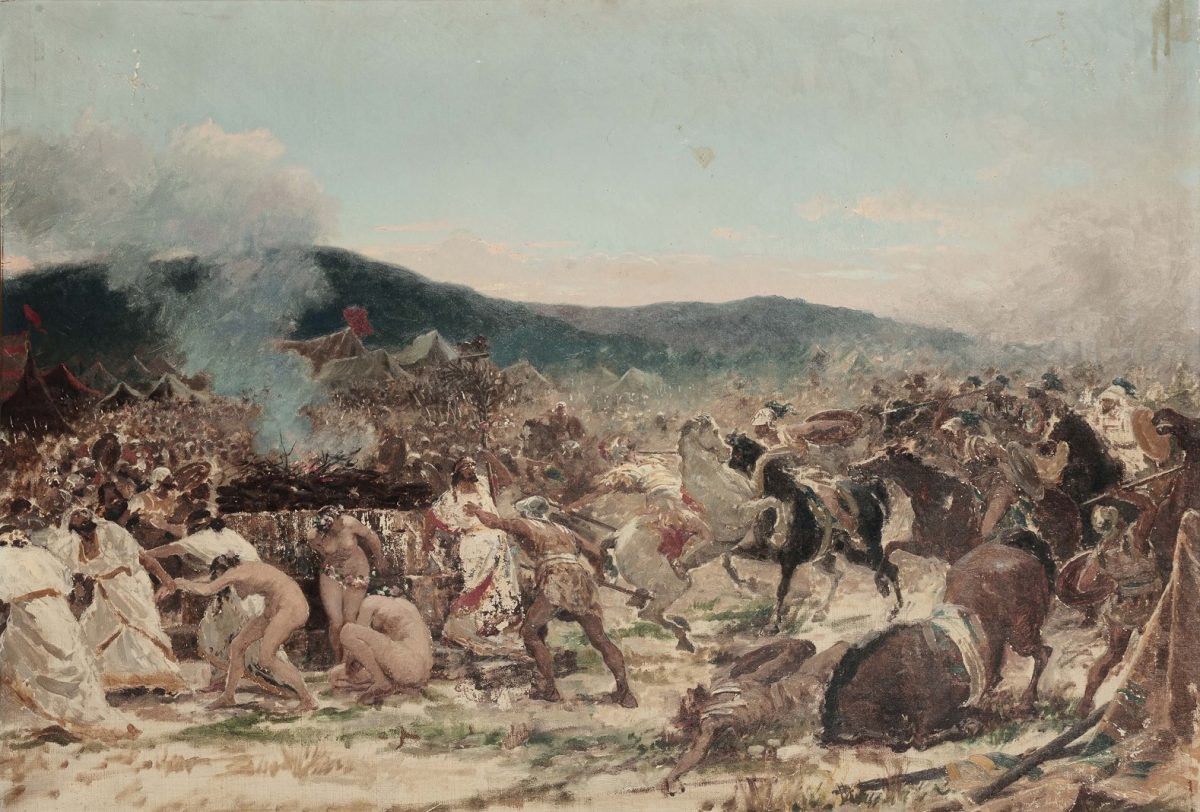 Founded in 648 BC by Chalcidian colonists from Zancles (now Messina) together with a group of Dorians from Syracuse, Himera was the setting for one of the most famous battles in ancient times, the so-called battle of Himera. It was fought in 480 BC under the city walls by the Greek armies of Gelon (Syracuse) and Theron (Akragas) against Hamilcar’s Carthaginians supporting Terillus of Himera and Anaxilas of Rhegium.

The clamorous victory of the Dorian cities of Syracuse and Akragas was exploited in propagandistic way by Gelon, who presented himself to the Greek world as the heroic defender of Sicily against the danger to it of being enslaved by the ‘barbarian’ Carthaginians. The triumph against the powerful Punic army was placed on the same level as the Greek victories at Salamis and Thermopylae against the Persians, and artful synchronisms were established between the battle of Himera and these two, which supposedly were fought in about the same time.

The reading in ‘nationalist’ terms of the victory at Himera is to be interpreted as a clever strategy adopted by the Syracusan tyrant to legitimise his power, obtaining wide consensus in Sicily, and to make sure that his autocratic power was also recognised by a panhellenic and international audience. Besides, the antagonism between Greeks and barbarians was overstressed in modern times, forming a useful pattern which supported instrumental readings. Scholars particularly vulnerable to the nationalist ideologies which spread all over Europe between the late nineteenth century and early twentieth century read the ancient history of Sicily according to this ‘clash of civilisation’ pattern: think of the analogies established between the battle fought by Carthaginians and Greeks at Himera, and the encounter between Saracens and Normans in Sicily in the Medieval Age (e.g. Grote, Freeman).

These days of study on Himera aim to further explore the history of Himera in the fifth century BC. This will be achieved through both the examination of literary and archaeological sources, and a reflection on the different theoretical models which moderns developed on the relationship between the Punics and other populations living in Sicily and across the whole Mediterranean area. Particular attention will be devoted to the battle of Himera in modern historiography, and to the fortune of Himera in visual arts, in literature, web materials, etc. The conference will also be the proper occasion to present the results of the most recent archaeological findings in the site of Himera.

The ISSA welcomes contributions, and invites all people interested in this conference to submit a 250-word abstract (including title and bibliography) to [email protected] on the following topics:

– Comparing ideologies: the Carthaginians in the imaginary of the ancients and the moderns

– Himera in the fifth-century BC Mediterranean network up to her fall: between history and archaeology

The two-day conference will take place in Palermo, in the half of December 2020, in full respect of anti-Covid19 sanitary rules. Each session will be chaired by a scholar chosen by the scientific committee. The ISSA will cover accommodation expenses and conference fees for the speakers. The conference proceedings will be published in the Journal Kokalos.

Further information will be found nearer the time at http://istitutosicilianoperlastoriaantica.it/