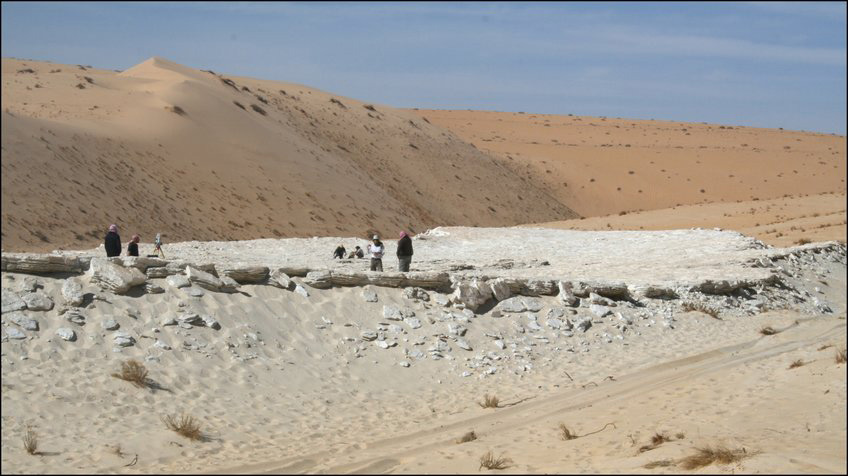 Human footprints give glimpse of Arabian ecology 120000 years ago

Situated between Africa and Eurasia, the Arabian Peninsula is an important yet understudied region for understanding human evolution across the continents. Recent research highlighting the role of the Arabian Peninsula in human prehistory shows that humans repeatedly dispersed into the peninsula’s interior at times when its harsh deserts were transformed into lush grasslands. However, the nature and timing of these dispersals have remained elusive, due to a scarcity of datable material and poor-resolution paleoecological data associated with evidence for humans.

In a new study published in Science Advances, researchers from the Max Planck Institutes for Chemical Ecology (MPI-CE) and the Science of Human History (MPI-SHH) in Jena, Germany and Royal Holloway University of London, UK, together with a team of international partners, describe a large assemblage of fossilized footprints discovered in an ancient lake deposit in Saudi Arabia’s Nefud Desert. The footprints, dated to roughly 120 thousand-years-ago, include those of humans, elephants and horses, among other animals. These findings represent the earliest dated evidence for human movements into this part of the world, contemporary with well-known human dispersals from Africa to the Levant. In addition, it appears that the movements and landscape use patterns of humans and large mammals were tightly linked, perhaps in response to dry conditions and diminishing water supplies.

A Green Arabia in Human Prehistory

Because the Arabian Peninsula is characterized by large, hyper-arid deserts inhospitable to early humans and the animals they relied on, Arabia has received considerably less attention than Africa or Eurasia, neighboring regions that are vital to understanding human prehistory. However, research over the last decade has shown that this was not always the case, and it is now well-understood that conditions in Arabia have fluctuated significantly over the past million years.

“At certain times in the past, the deserts that dominate the interior of the peninsula transformed into expansive grasslands with permanent freshwater lakes and rivers,” explains Richard Clark-Wilson of Royal Holloway, one of the lead authors of the study. “It was during these periods of climatic upturn that human and animal populations dispersed into the interior, as shown by the archaeological and fossil record.”

Footprints as a High-Resolution Proxy

The footprints described in the new study were discovered during a recent survey of the Nefud Desert in Saudi Arabia. At an ancient lake deposit dubbed ‘Alathar’ (meaning “the trace” in Arabic) by the team, hundreds of human and animal footprints were discovered embedded in the surface, having been exposed following the erosion of overlying sediments.

“We immediately realized the potential of these findings,” says Mathew Stewart of MPI-CE, one of the study’s lead authors. “Footprints are a unique form of fossil evidence in that they provide snapshots in time, typically representing a few hours or days, a resolution we tend not get from other records.”

Researchers were able to identify a number of animals from the footprints, including elephants, horses, and camels. The presence of elephants was particularly notable, as these large animals appear to have gone locally extinct in the Levant by around 400 thousand-years-ago.

“The presence of large animals such as elephants and hippos, together with open grasslands and large water resources, may have made northern Arabia a particularly attractive place to humans moving between Africa and Eurasia,” says Michael Petraglia of MPI-SHH, who has been conducting research in the region for over a decade.

The dense concentration of footprints and evidence from the lake sediments suggests that animals may have been congregating around the lake in response to dry conditions and diminishing water supplies. Humans, too, may have been utilizing the lake for water and the surrounding area for foraging.

“We know people visited the lake, but the lack of stone tools or evidence of the use of animal carcasses suggests that their visit to the lake was only brief,” says Stewart. Human movements and landscape use patterns, therefore, may have been closely linked to the large animals they shared the area with.

The age of the footprints is of particular interest. They date to a period known as the last interglacial, a time of relatively humid conditions across the region and an important moment in human prehistory. Environmental changes during the last interglacial would have allowed humans and animals to disperse across otherwise desert regions, which normally acted as major barriers to dispersal during the less humid periods. Fossil and archaeological records indicate that these conditions also facilitated human dispersal from Africa into the Levant.

“It is only after the last interglacial with the return of cooler conditions that we have definitive evidence for Neanderthals moving into the region,” says Stewart. “The footprints, therefore, most likely represent humans, or Homo sapiens.”

These findings suggest that human movements beyond Africa during the last interglacial extended into northern Arabia, highlighting the importance of Arabia for the study of human prehistory.