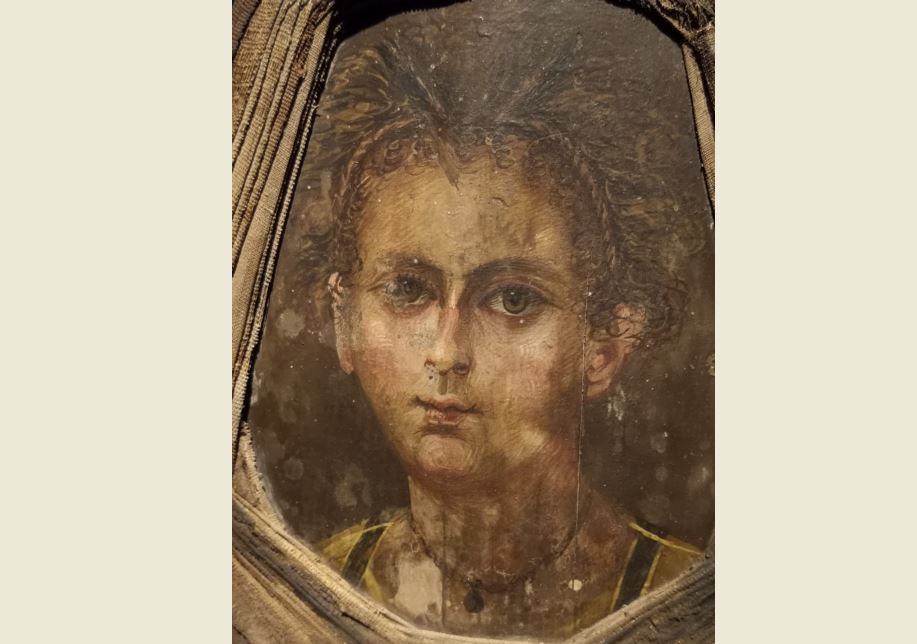 Compared with his mummy portrait for the first time

Researchers in Germany and Austria managed to provide the first scientific report of a facial reconstruction of a mummified Roman-era Egyptian infant that has been compared with its mummy portrait.

Ιt is widely known that in the Graeco-Roman era,  in the Lower-Egyptian Fayoum region, a painted portrait was traditionally placed over the face of a deceased individual. These mummy portraits show considerable inter-individual diversity, generally suggesting that they were created separately for each individual.

Of the known examples of Egyptian mummy portraits, only an estimated 10% is still attached to a mummy, providing a clear context allowing comparison of the deceased with its funerary image. So far, there is a considerable bibliography of studies dealing with the probability that the portrait might indeed represent the buried individual´s face, with some including comparisons of published facial reconstructions of such burials to their portraits. Still, they all deal with adult mummies and none with a sub-adult individual. Until now.

The team of researchers led by AG Nerlich worked on the completely wrapped mummy of an infant that had been located in the cemetery of Hawara, still attached to its funerary portrait. The results were published in a PLOS ONE paper which is available online here.  At first, conducting a whole-body CT analysis, the team obtained physical information on the infant, as well as info used as the basis for virtual face reconstruction, in order to compare it to the mummy portrait.

From a biomedical point of view, the body was identified as a 3–4 years old male infant that had been mummified according to the typical ancient Egyptian mummification rites. The boy most probably suffered from a right-sided pulmonary infection which may also be the cause of death.

As for his face, the reconstruction showed considerable similarities to the portrait, allowing experts to confirm the portrait’s specificity to this individual. “In our study, we found high concordance between both–as evidenced by both subjective visual evaluation and biometric analysis–though the match is not 100%” the team states in the paper, concluding that the portrait “must therefore have been made shortly after his death–possibly with the help of preliminary sketches”.

However, there are some differences between the portrait and the face. In particular, on a biometric level, the width of the nose and the mouth are smaller in the portrait than in the face, which might explain the perceived difference in age; the portrait seems to show a slightly older individual. To explain that, the team proposes that “it may be due to artistic conventions of that period”.