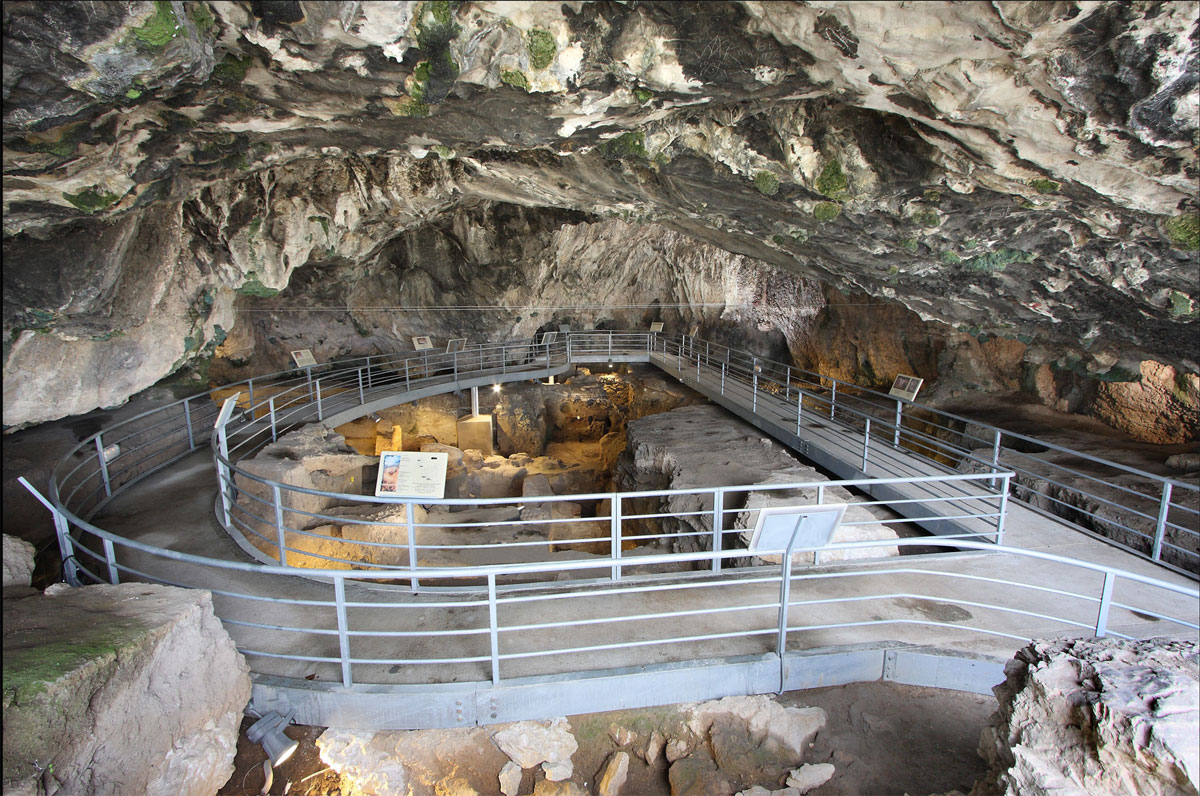 Who lived in the Theopetra Cave?

“The excavations in the Cave of Theopetra came to disprove earlier data leading us to the beginnings of prehistoric humans’ habitation in Thessaly. The cave has been a refuge for people over many thousands of years, while of course it is very likely that there were periods when they abandoned it, depending on the prevailing weather conditions, since the climate changed repeatedly during those thousands of years. In recent years the cave also served both as a shelter for the local population in times of war and as stables.”

This is the latest data recently presented in Trikala, at the 14th Panhellenic Conference of the Hellenic College of Pediatricians, by Nina Kyparissi-Apostolika, Dr. of Prehistoric Archaeology, head of excavations of the Theopetra Cave and honorary director of the Ephorate of Paleoanthropology and Speleology of the Ministry of Culture and Sports.

The Cave of Theopetra is situated to the right of the Trikala to Kalambaka route, 3 km before reaching the latter, at an altitude of about 300 m above sea level and 100 m above the plain, on the north side of a limestone mass that rises above the Local Department by that name of the Municipality of Kalambaka. The river Lithaios, a tributary of the Pineios, flows very close by and continues through the town of Trikala.

The area of the cave is approximately 500 sq.m. The entrance is arched, 17 m wide by 3 m high and allows abundant natural light to enter the interior. Exactly opposite you can see the rocks and monasteries of Meteora. It is the westernmost prehistoric site of Thessaly and is directly adjacent to both the Thessalian plain and the Pindos mountain range, Koziakas, and features from the two different natural environments are also reflected in the cave’s backfilling.

What people lived in the Theopetra cave?

Αmong other findings, says Nina Kyparissi-Apostolika, we were fortunate to discover human burials at the place of their deposition so there is no doubt that this cave was inhabited. Two burials correspond to the post-glacial Upper Palaeolithic period and one has been dated to 14990-14060 BC, while three more burials correspond to the Mesolithic, and have been dated between 7000 and 7500 BC. All skeletons, according to the archaeologist, belong to the type of Homo Sapiens sapiens.

Although no burials of the period were found in the deeper layers of the Middle Paleolithic, archaeologists were fortunate to discover human footprints (an extremely rare find worldwide), but they were covered so it is difficult to detect particular anatomical features in them. It is estimated, however, according to the types of stone tools found in these layers, that Neanderthals lived there. A palaeopathological analysis of human bones of the Neolithic period shows that the approximately 43 people estimated to have lived in the cave during this period, seem to have been quite healthy, says the archaeologist and explains:

“Results of analysis of stable isotopes show their diet seems to have been based on C3 plants, such as wheat, barley, olives and pulses, the presence of which is also confirmed by archaeobotanical remains. Animal fats, vegetable oils and beeswax were also identified by organic residue analyzes. It is almost certain that their diet included some meat mainly from domesticated animals, although it is believed that these were kept mainly for their by-products (wool, milk, etc.), i.e. a diet that prevailed in Greece until the Second World War.Nevertheless, a few fish bones and freshwater shells were also found in the cave, most likely from the nearby river Lithaios, while the Pineios flows 4 km away. Moreover, according to the same data, many animal bones were identified from the Neolithic backfill, such as sheep and goats making up the dominant species by 60%, cattle, pigs and domesticated dogs, but also about 11% of wild animals, such as various species of deer, wild boar, bear, hare, wildcat and badger that had been hunted. On the bone of a bear dating to the Neolithic period – towards the end of the 5th millennium – knife imprints were found attributed to attempts to cut up the animal. “Lastly”, the archaeologist points out, “the first jewels in Thessaly come from the cave of Theopetra. These are two deer teeth into which holes were bored in order to be hung up, and a freshwater shell, apparently from the nearby river, in which a hole had also been opened for it to be suspended. All these come from the Post-Glacial period of the cave’s use, when there was a significant increase of both the stone tools and obviously its population. Dating ranges from 130,000 years from today to around 4300-4200 BC making it probably the most dated archaeological site in Greece. The abandonment of the cave by its occupants around 4000 BC is  most likely related to natural phenomena as well the land being used for cultivation: the intense activity of the water that entered the cave through karst ducts  towards the end of the Neolithic and the collapse of large pieces of the roof, again due to erosion, probably forced the occupants out of the cave in search of another place to make their home and a way of life that they already knew from outdoor settlements in their greater area”, says Dr. Nina Kyparissi-Apostolika and concludes by pointing out that “Due to its importance for the history of Southeastern Europe, the cave has became an archaeological site open to the public, while its findings are exhibited at the Theopetra Cave Documentation and Training Center (Museum) at the entrance of the village, not far from the cave.”