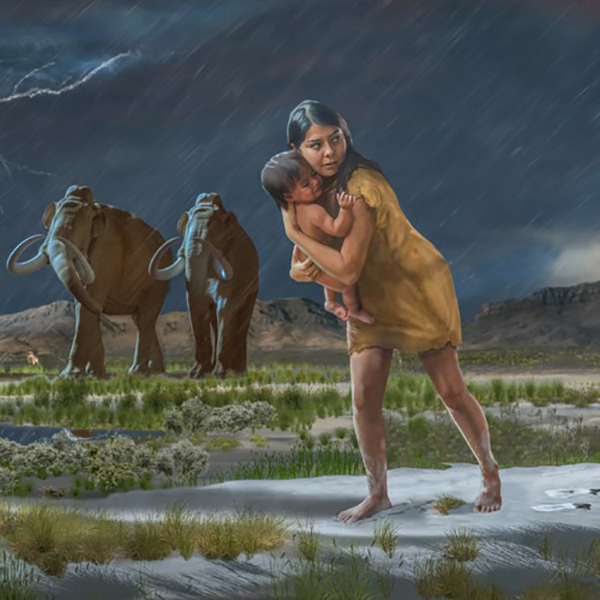 Interaction of humans and extinct animals from the Ice Age

Footprints are a common theme at White Sands National Park, New Mexico. Every day, people from all over the world visit and leave traces of their comings and goings. The white dunes of the Tularosa Basin are just a recent blip on the geological timeline. During the Ice Age tens of thousands of years ago, a giant body of water called Lake Otero existed. The climate was wetter, and the vegetation was abundant. One could have seen grasslands stretching for miles that would have looked more like the prairies of Nebraska than New Mexico’s deserts.

This paradise of lush green life naturally captured the attention of the larger animals of the Ice Age. Plant eaters of all kinds came to Lake Otero to feast on the grasses and trees of the Tularosa Basin. Large plant-eaters attracted fearsome predators of the ice age, such as dire wolves and the American lion. Throughout the Ice Age, these animals left their footprints along the wetlands of Lake Otero.

Around 12,000 years ago, the earth’s climate began to show signs of change. Areas once green and lush started transforming into the desert landscape we see today. Rainfall in the Tularosa Basin became rare, and the great Lake Otero began to dry. The once large body of freshwater became only pools of water scattered along the former lakebed. As the waters of Lake Otero dried, crystals began to form from the gypsum left behind by the evaporating lake water. The constant blowing of the wind broke down those large crystals into smaller crystals. This eventually formed the white sand dunes that gave this park its name.

Today we find fossil footprints of the animals that once lived here at White Sands more than 10,000 years ago. Scattered along the now dried lakebed are trackways and trample grounds of ancient camels and Columbian Mammoths. These fossilized footprints appear to gather around what may be ancient pools of water.

For 80 years, only a small collection of fossil footprints were known. However, a group of scientists noticed dark spots dotting the expanse of the lakebed that appeared to be footprints. Their curiosities lead them to dig up these odd dark spots. This led to the discovery of both Harlan’s Ground Sloth and Paleo-Human footprints. During the 2010s, footprints of a dire wolf were discovered. These footprints were located next to ancient seeds. Scientists dated these seeds to more than 18,000 years ago.

The people, who once lived in the Tularosa Basin, left very little proof they lived here. Throughout the basin, pieces of stone flakes from toolmaking, arrowheads, and spear points have been found. However, these appear to be related to peoples who lived after the Ice Age. This is in contrast to the surrounding areas that are filled with items left behind from ancient peoples. The lakebed of Lake Otero seems to be almost devoid of a single artifact that dates to before the Spanish exploration in the 1500s, let alone the Ice Age.

At White Sands, we find many remarkable tracks scattered across the lakebed. This includes a long track of human footprints that extends for long distances. While these footprints are ancient, scientists are still uncovering new evidence of past life. In 2018, researchers discovered what they believe to be the footprints of a female. They tell a story that may seem familiar today her footprints show her walking for almost a mile, with a toddler’s footprints occasionally showing up beside hers. The footprints broadened and slipped in the mud with additional weight. This suggests that she carried the child, shifting them from side to side and setting them down as they walked. Footprints across White Sands have been found coexisting and interacting with extinct Ice Age animals.

One set of footprints shows what appears to be humans stalking a giant sloth. This is shown by human footprints being found inside the footprints of the sloth as they were tracked. Currently, there is no evidence of a fruitful hunt, but this is not surprising. Most Ice Age hunts were not successful, with only one out of three hunts ending with a kill.

The Ice Age ended because of changes in the earth’s climate. Environments once rich in lush green life began to disappear. The reason for the disappearance of the great beasts of the Ice Age is still debated among scientists. More than likely, it was the combination of both the changes in climate and the overhunting by skilled people. The fossilized footprints of White Sands are probably the most important resources in the Americas to the understanding of the interaction of humans and extinct animals from the Ice Age.

These fossilized footprints, among other natural and cultural features found in the dunefield, further propelled the movement to re-designate White Sands National Monument into White Sands National Park. As a massive landscape filled with history that stretches beyond points on our planet’s geologic timeline, White Sands continually proves itself to be more than just a sandbox.