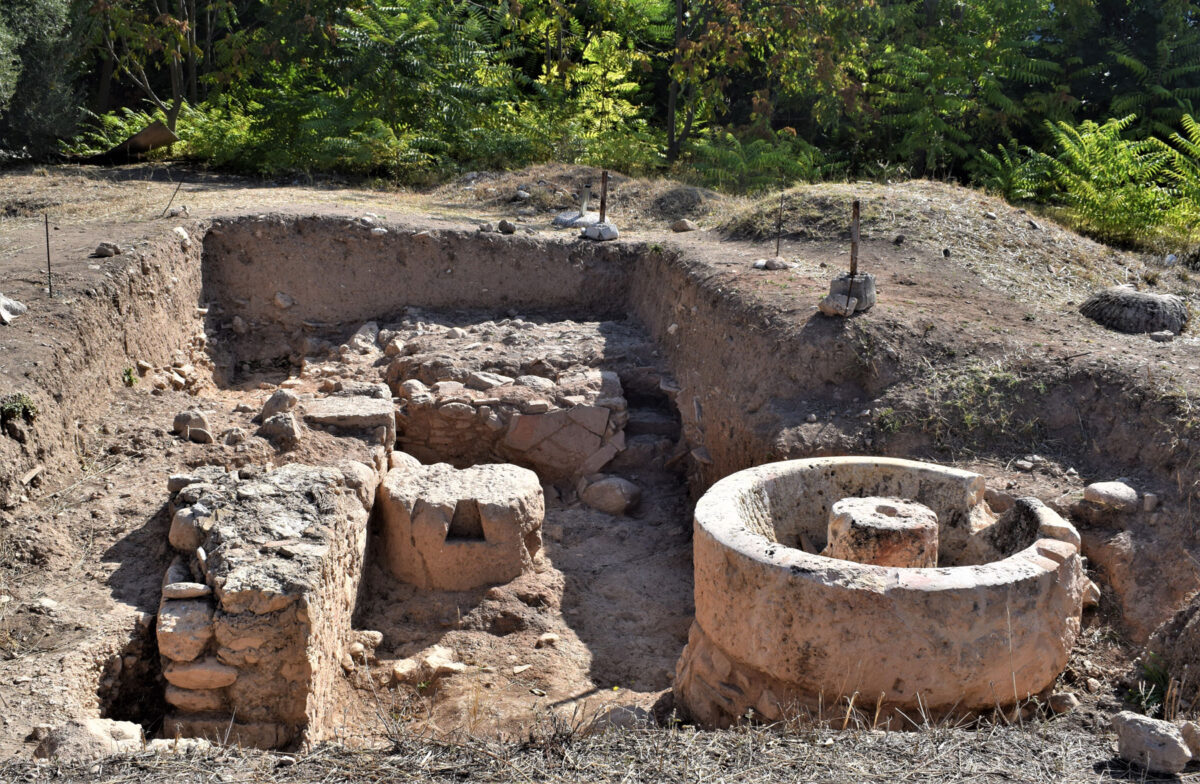 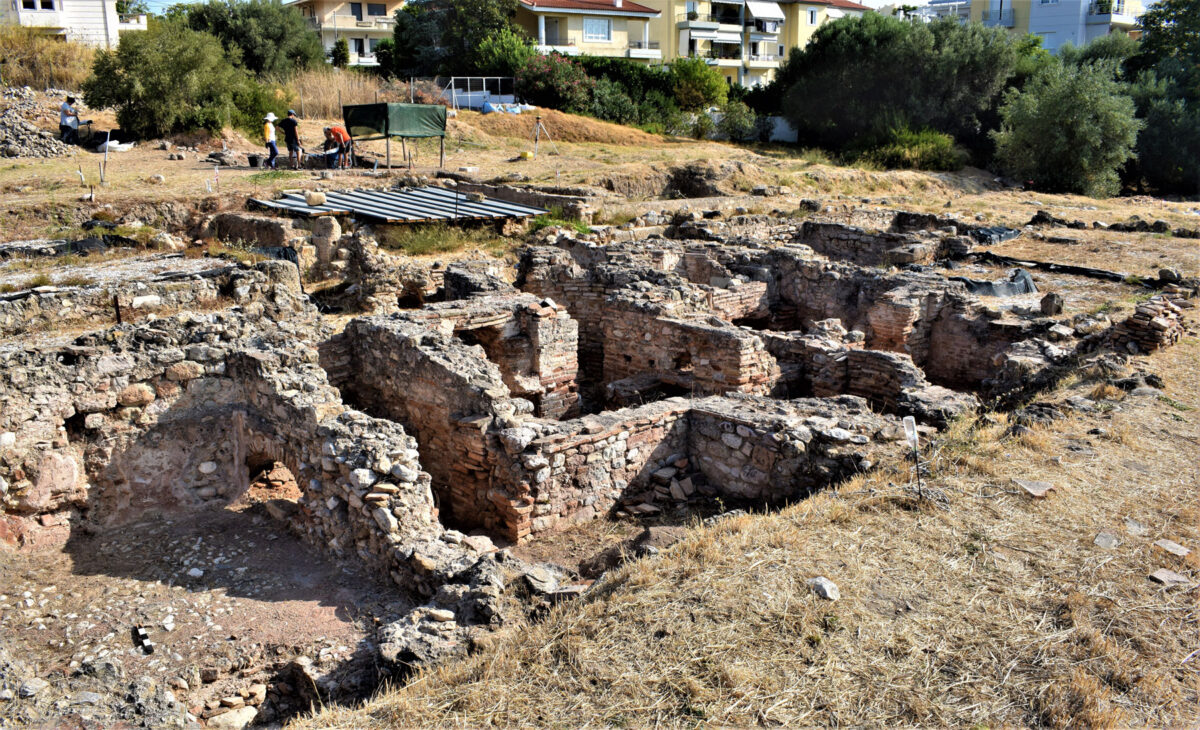 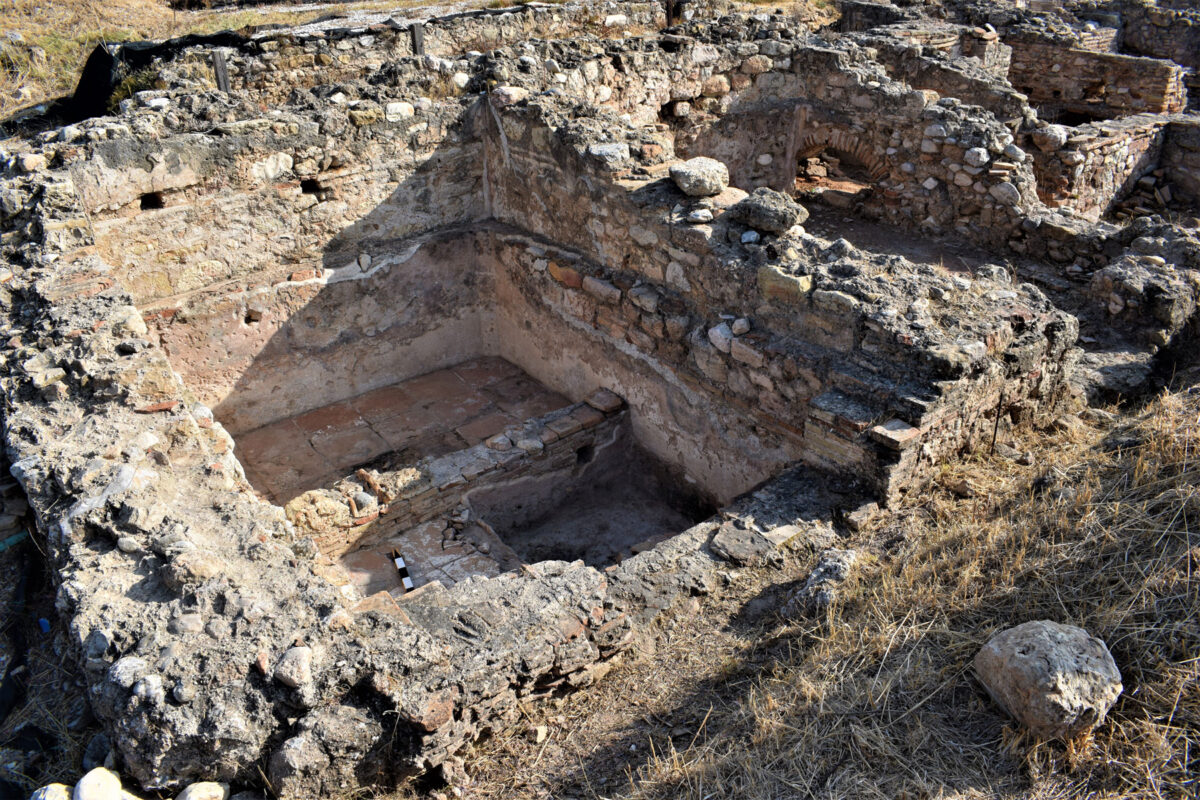 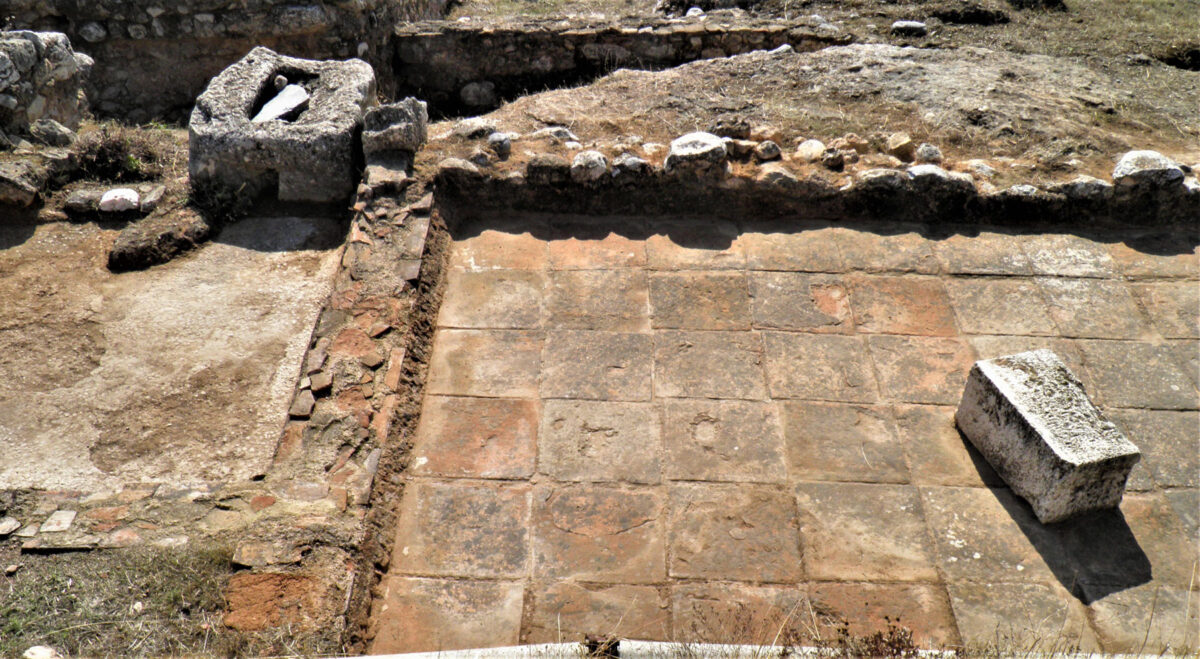 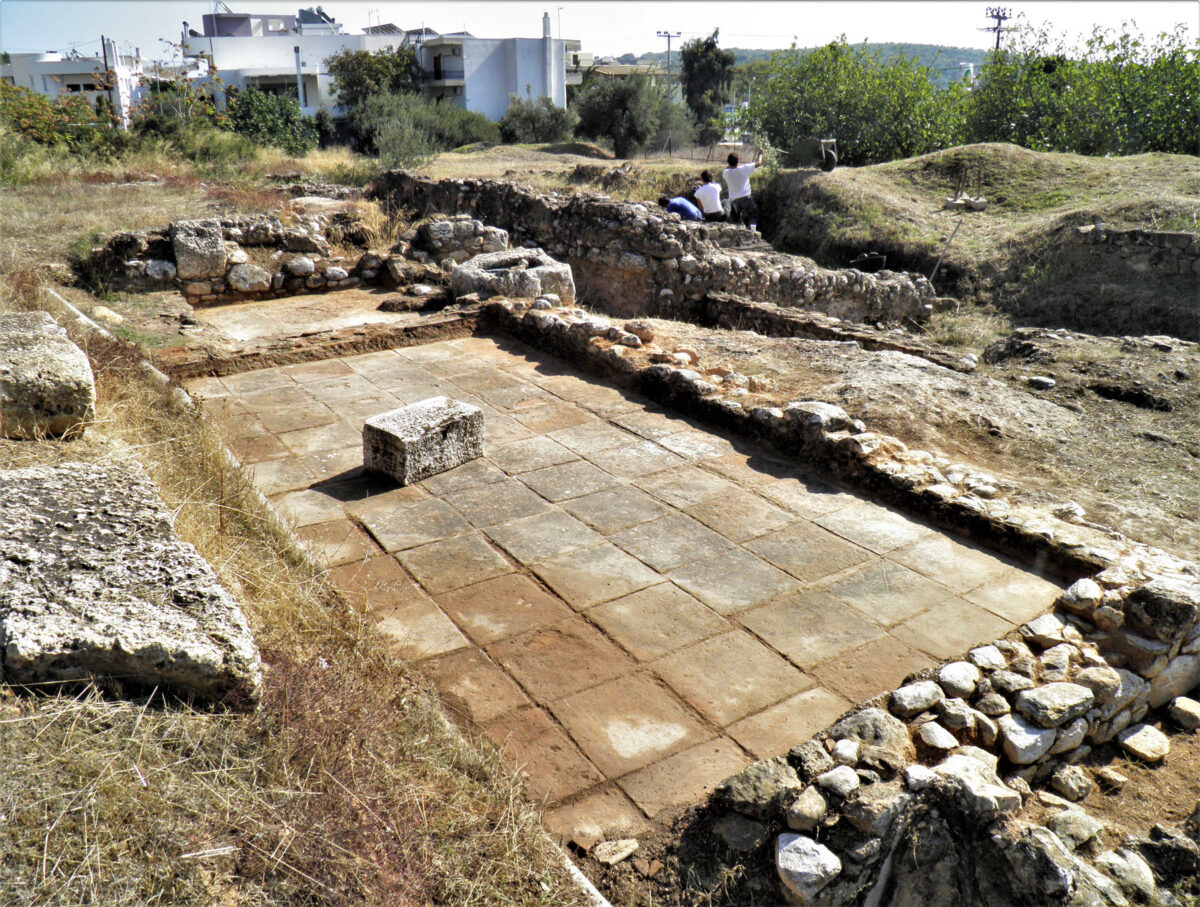 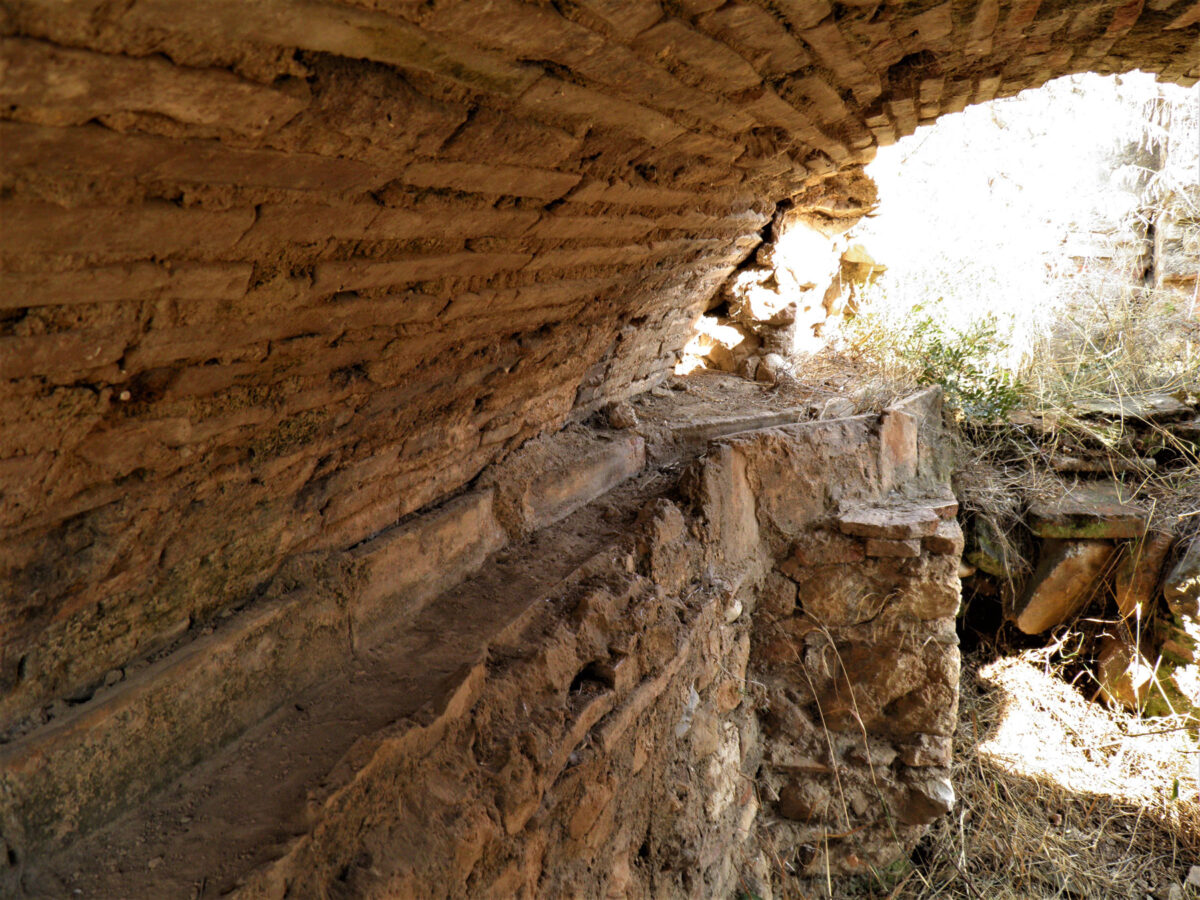 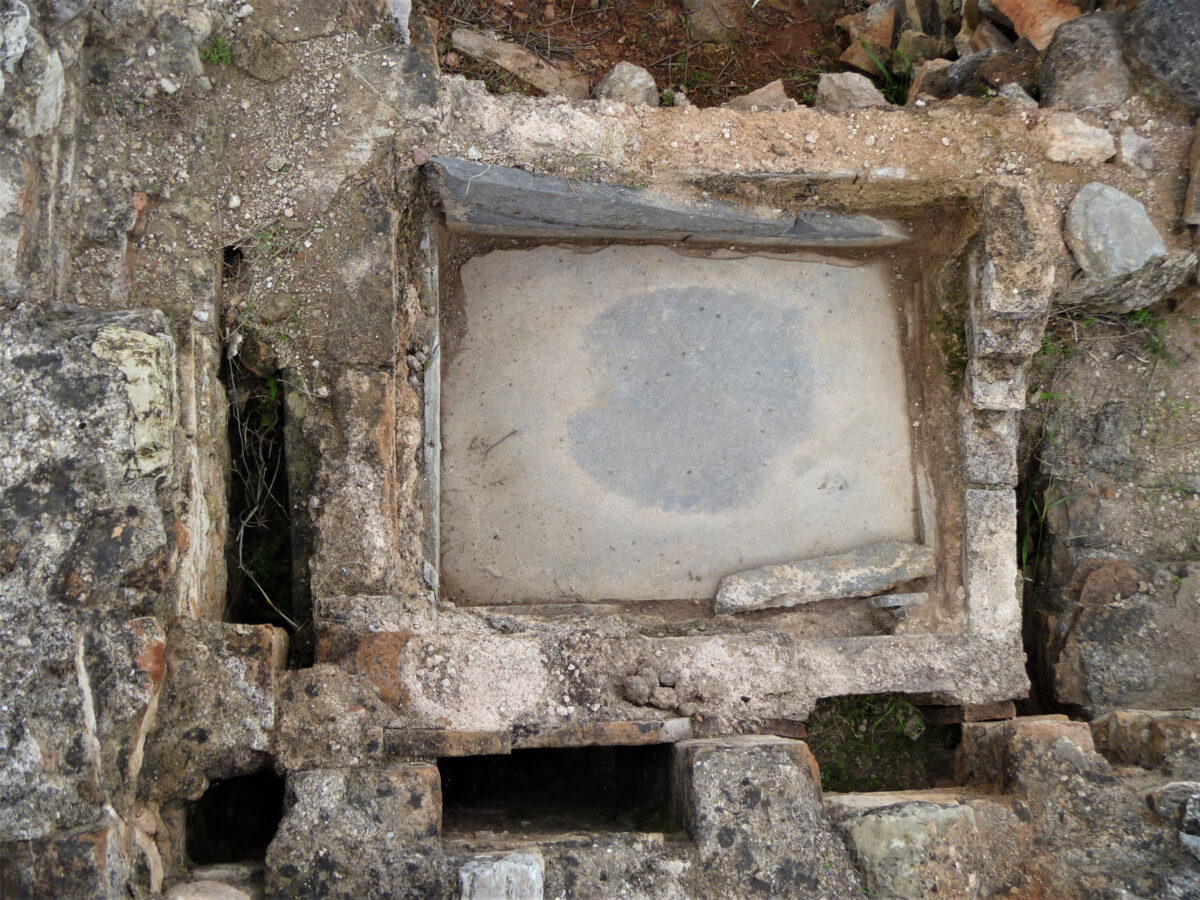 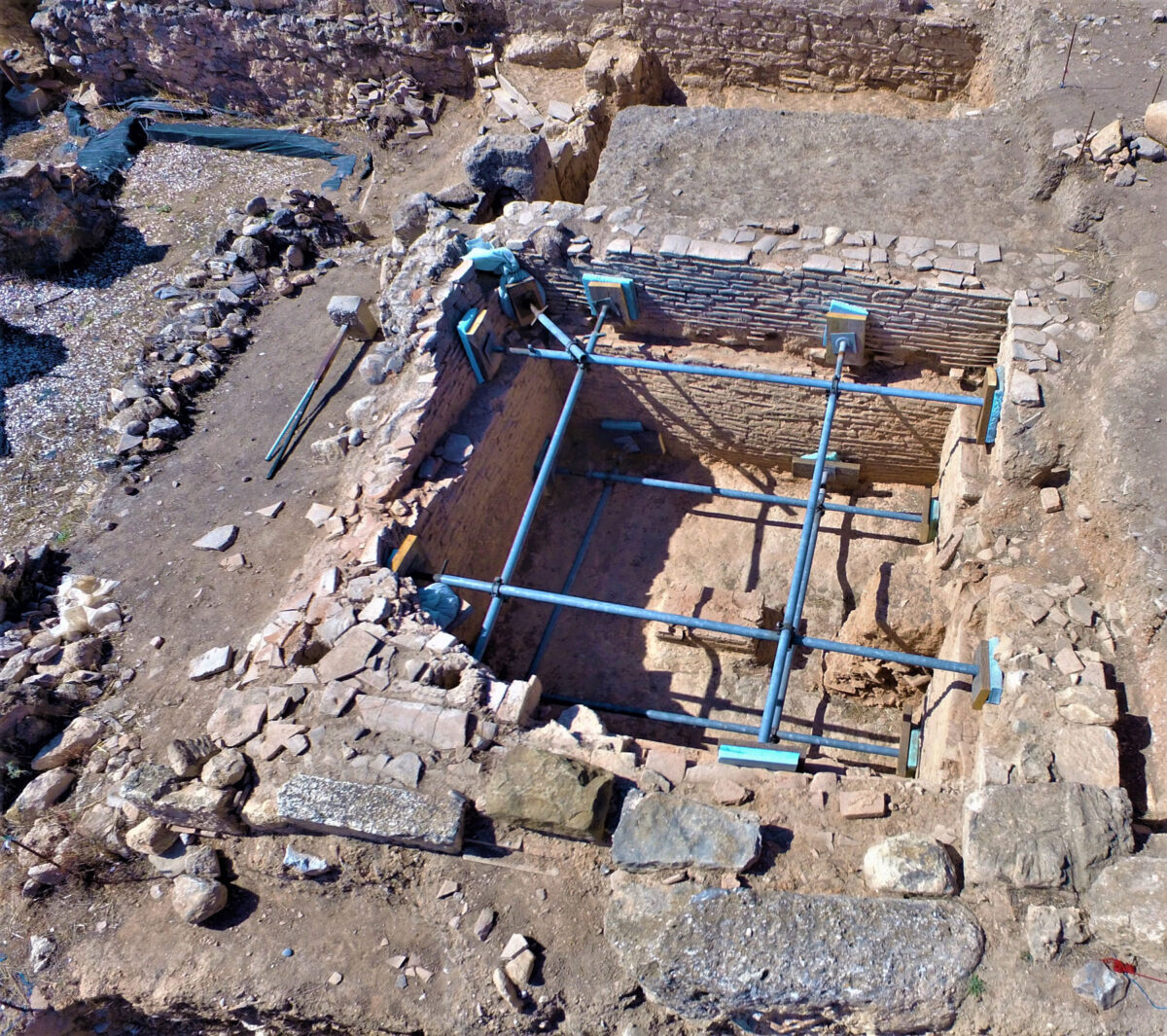 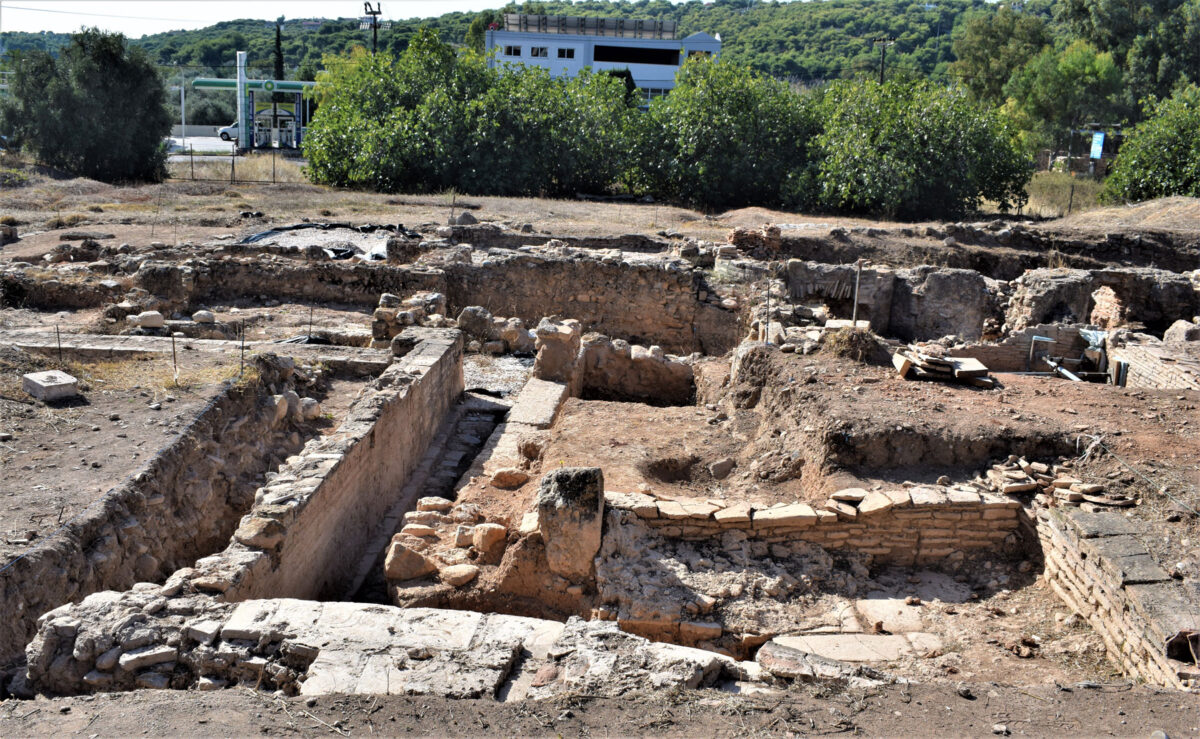 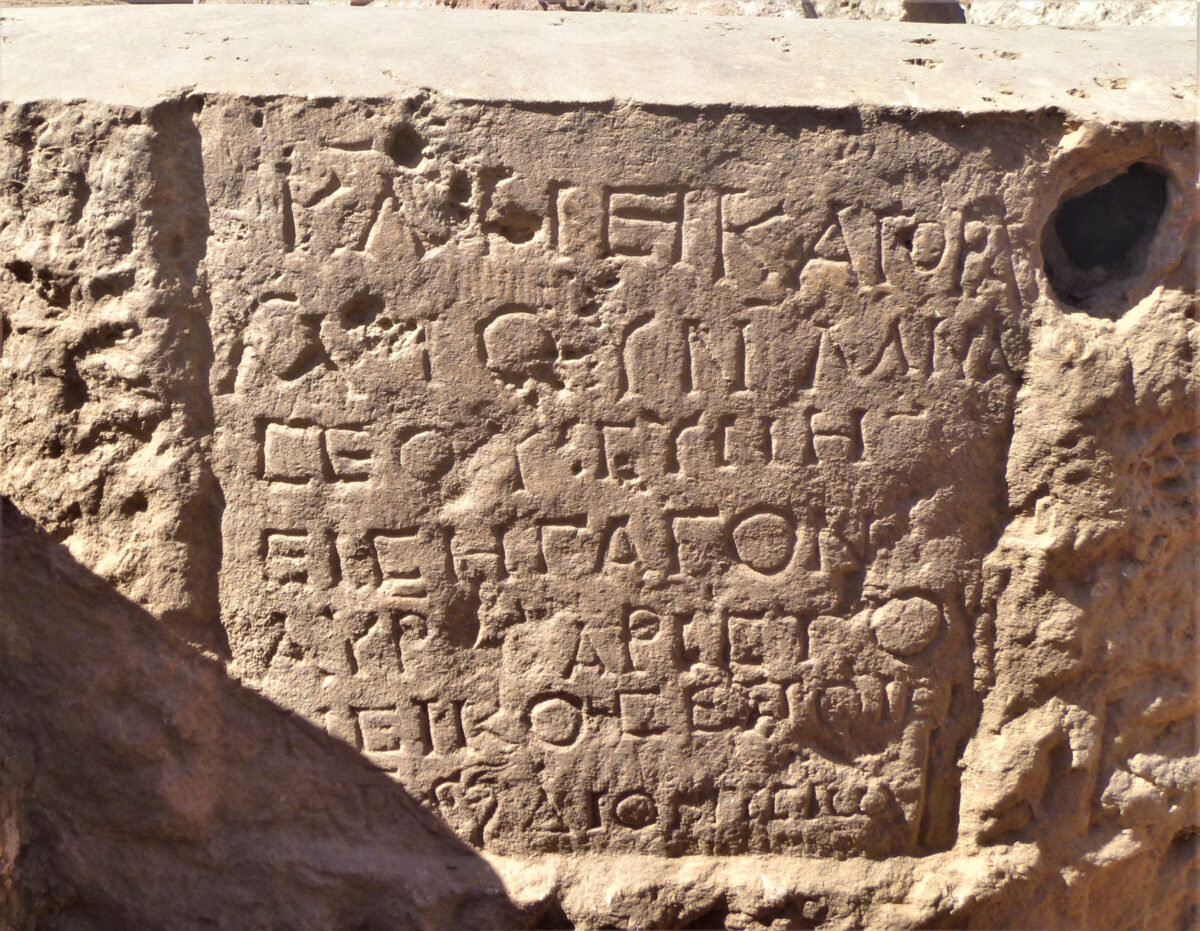 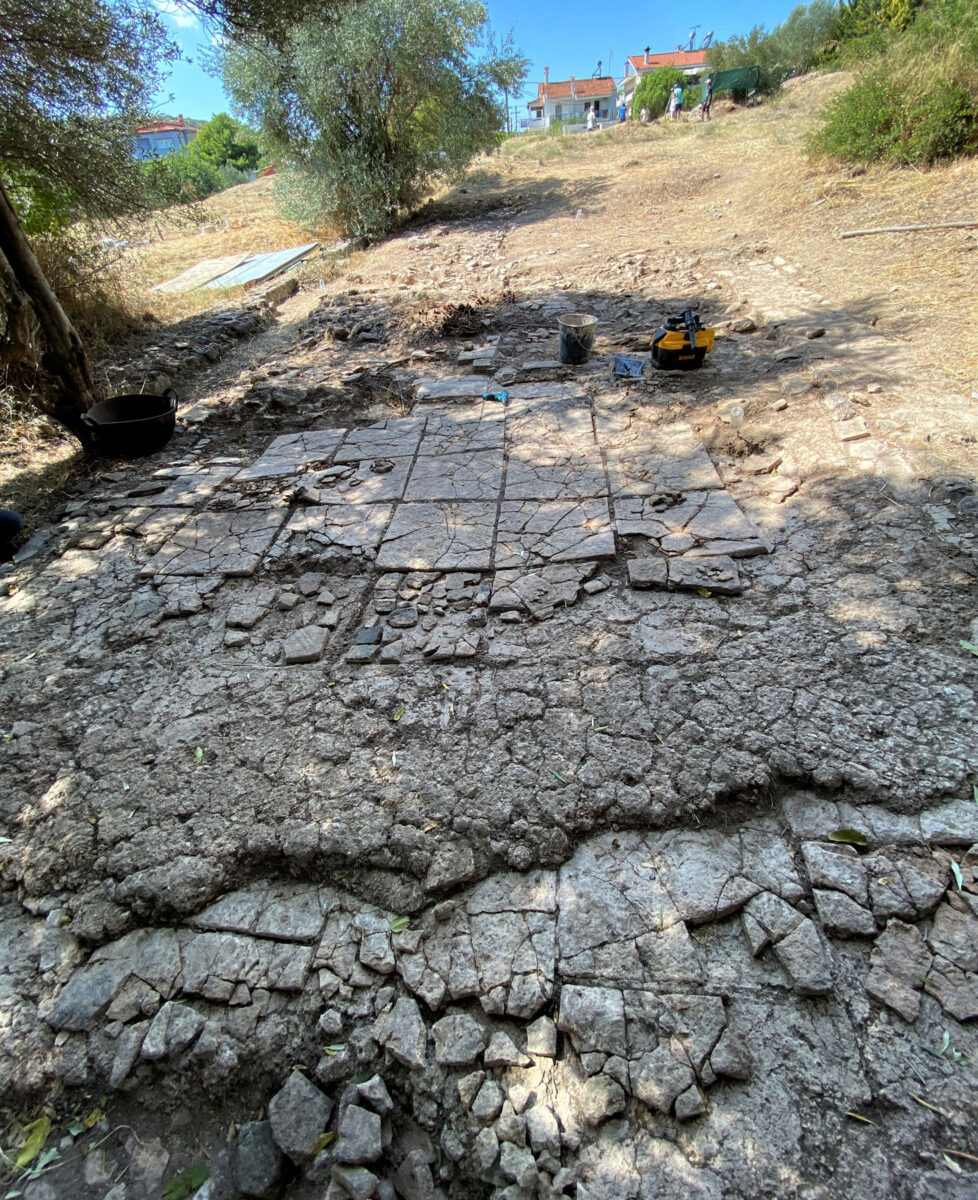 The Roman Balneum in Rafina: A monument reveals itself…

What can the excavation of a Roman bath and its surroundings reveal? If the monument is located near an ancient municipality about which we know very little, such as the municipality of Arafinos (i.e. Rafina), it can bring to light valuable information possibly related to it. And if it is linked to other important findings, such as an inscribed olive press basin ‒ unique in its inscription ‒ it can provide information that may perhaps change views and beliefs about the rural life of late antiquity. The Athens and Macedonia News Agency (AMNA) visited the archaeological site of the Roman Balneum in Rafina ‒ where since 2013 a systematic excavation is being conducted with the cooperation of the Department of History and Archaeology of the National and Kapodistrian University of Athens and the Ephorate of Antiquities of Eastern Attica ‒ and talked to the site’s excavators.

“We are in the Municipality of Rafina-Pikermi, somewhere between the Junction and the well-known port of Rafina. At this site, which everyone knows as the Roman Balneum of Rafina, the remains of an ancient building complex were found by chance in the 1970’s while works were being conducted by the community of Rafina. The Archaeological Service, which considered it its duty to investigate these remains, unearthed a complex of rooms that resembled baths and then saw to the site’s expropriation. 45 years later, however, this site had remained unidentified and although the monument was standing and being cleaned, it was in danger of not being further conserved. Thus in 2012 the then 2nd Ephorate of Prehistoric and Classical Antiquities of Attica decided to collaborate with the University of Athens and its colleague archaeologist Stylianos Katakis, assistant professor of Roman Archaeology. So since 2013 a programme of systematic excavation has been underway, as part of a collaboration between the two bodies, to distinguish the monument’s character and whether both it and its surroundings are related to the ancient municipality of Arafinos, one of the few names of municipalities that are preserved today almost unchanged,” says Dr. Vangelis Nikolopoulos, the excavation’s co director, head of the Department of Prehistoric and Classical Antiquities and Museums of the Ephorate of Antiquities of East Attica.

“The central area is a Roman bath (balneum), one of the many found throughout the Mediterranean. Baths were a key feature of the culture of the time, not only for the body’s cleanliness, but also because they were a popular place for socializing. But they were also costly to maintain because they required water and a lot of fuel to heat the floors and walls. In its first phase, the 2nd century AD, the Roman Valaneion of Rafina was quite large ‒ we still do not know its limits ‒ while from the 3rd century onwards it became more contained. We have distinguished three construction phases; in fact in the 3rd century and after the building seems to have been quite luxurious, as shown by the remains of a mosaic and the marble revetment that we have found in some places, but it was quite small,” said Dr. Stylianos Katakis, co-director of the excavation and assistant professor of Roman Archaeology at the University of Athens.

In a trial trench opened in 1974, the upper part of a limestone olive press basin with a diameter of 1.68m had surfaced next to the monument. The basin is a common utensil used in the processing of olives since antiquity down to modern times. “In fact the method of processing had not changed until about 50 years ago,” the professor informs us. In 2014, however, something came to light that made it unique. An inscription engraved on the basin for crushing olives which reads as follows: Κλ(αυδία) Νικογόρα / Μ(άρκου) Ἰουν(ίου) Μνα- / σέου γυνὴ εἰσήγαγον. / Αὐρ(ήλιος) Ἀριστό- / νεικος ἐποίει / ἄρχ (οντι) Διονυσίω.

“It is a very important inscription for interpreting the site and shows us which man or rather woman brought this basin to the olive press. It was Claudia Nikogora who, according to the inscription, “introduced” the basin. We do not know her name from other sources, but we do know her husband: Marcus Junius Mnaseas, also mentioned in the inscription, was treasurer of the Amphictyonic League in Delphi, in 212 AD, which gives us a precise date. Moreover, all those mentioned in the inscription, even the basin’s craftsman, have Roman names, that is, they are Roman citizens ‒ from which such words as Romioi and Romiosyni have survived ‒ as were all inhabitants of the empire after Caracalla’s decree of 212 AD; an event that took place shortly after the specific date. The inscription also shows that the place we are in was not private, but public, which explains many things regarding the area,” Mr. Katakis points out to the AMNA. But how common was it for a woman at that time to make such a donation? “The inscription proves that a woman of that period could have enough power and wealth, even large land ownership, as we know from other inscriptions with lists of landowners in Attica, including women,” he tells us.

One of the most enigmatic spots of the excavation is a very large building, approximately 46×21m, which covers the entire northeastern part of the site. “It used to be interpreted as an early Christian basilica, but the first evidence shows that this is probably not the case,” points out the professor, who ends our short tour of the site with a stop at the ceramic kiln unearthed in 2015 in fairly good condition. “It is the second kiln found in the area. This fact, combined with the olive press and wine presses that we have unearthed, shows this is an agricultural-cottage industry establishment of late antiquity, which lasts till around the 6th century AD. In other words, at a guess it is a place for processing products of the region which were stored in this large building. However, it is still early to be certain about the use of the building itself,” Mr. Katakis explains to the AMNA.