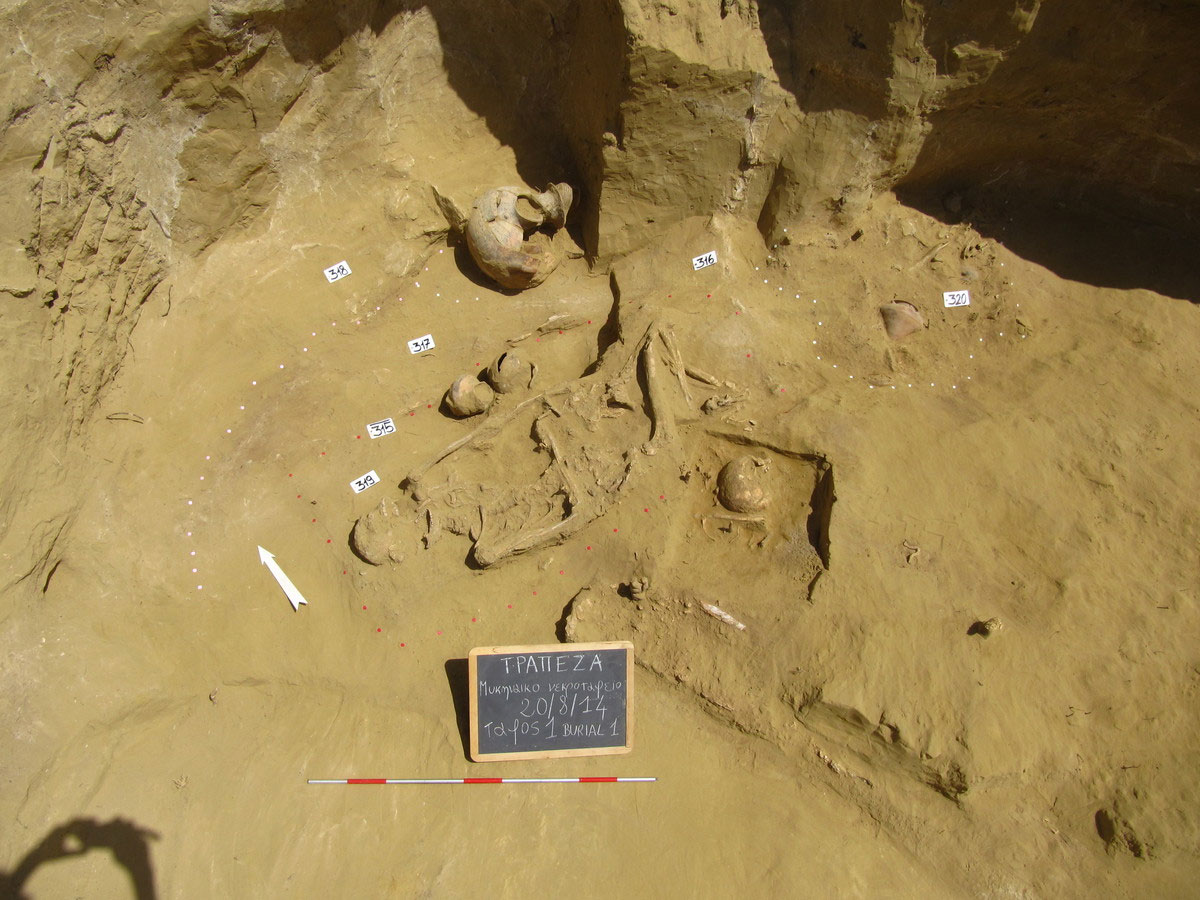 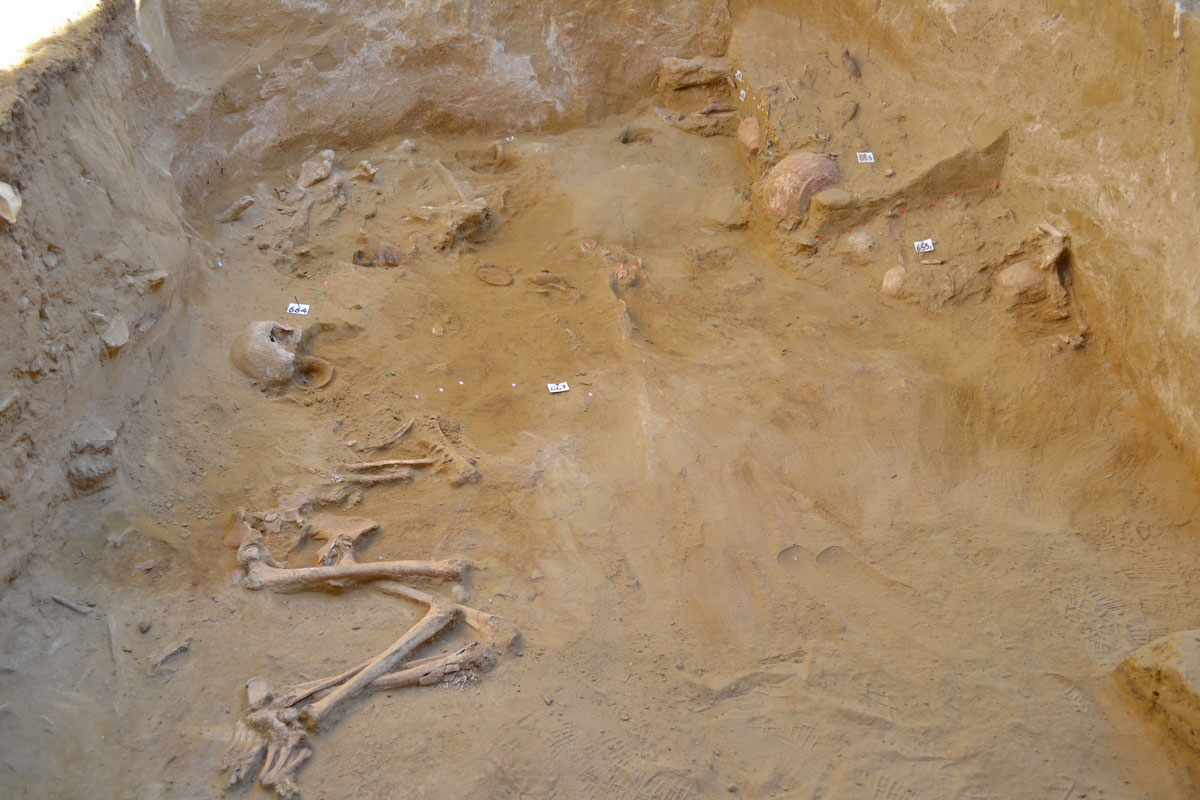 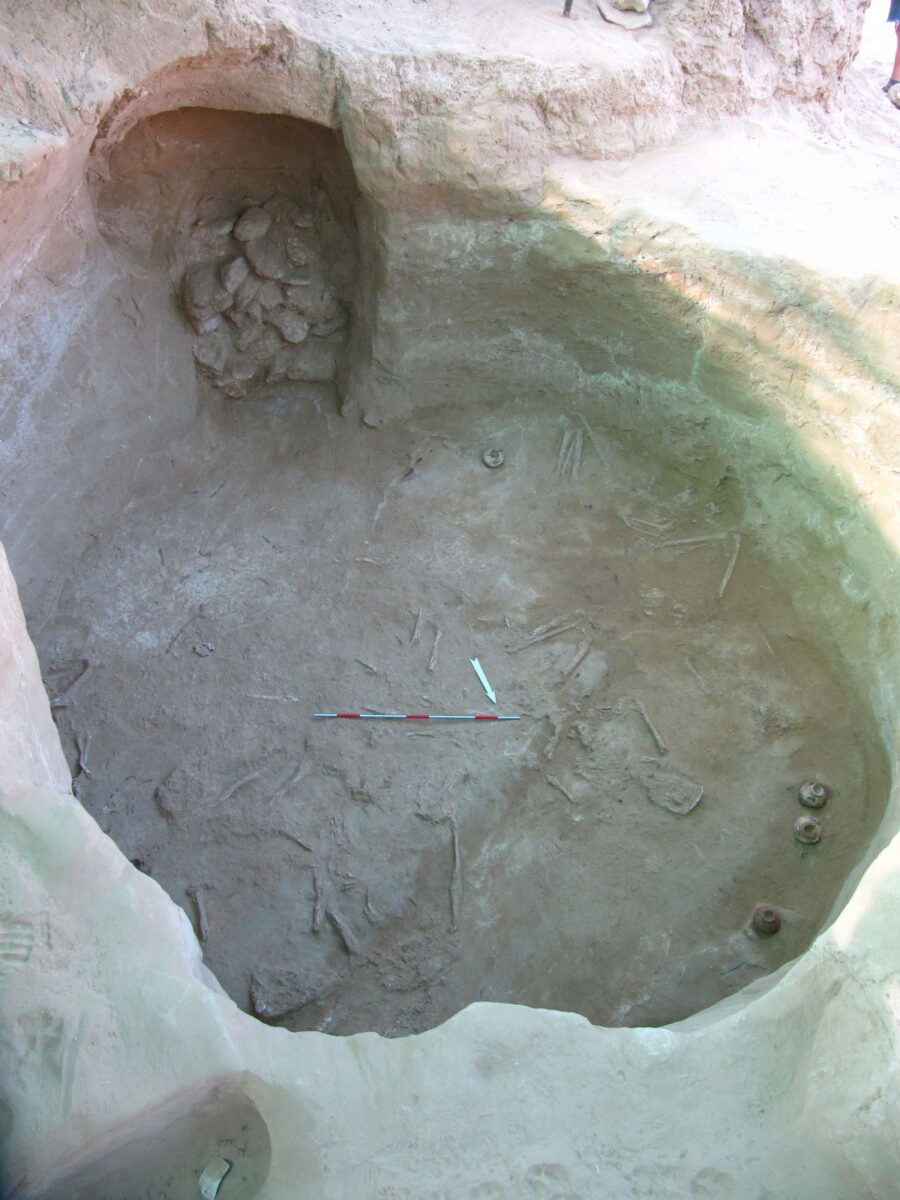 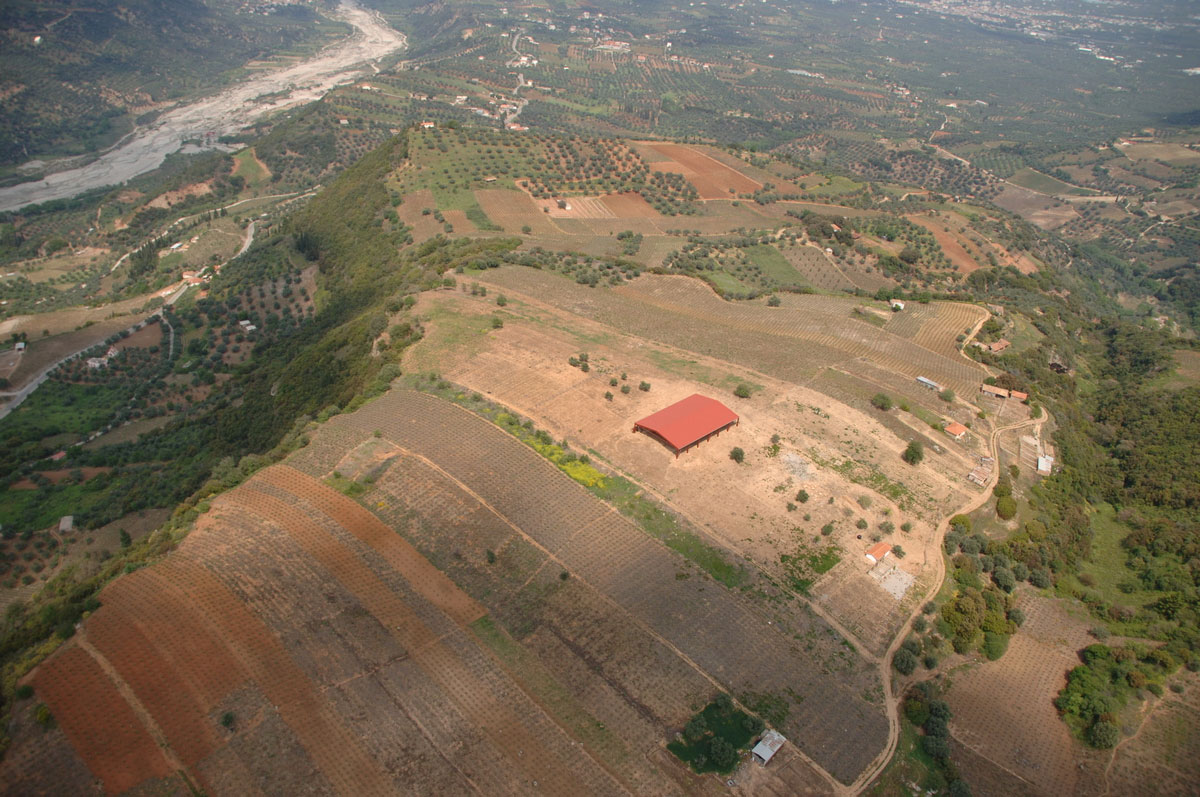 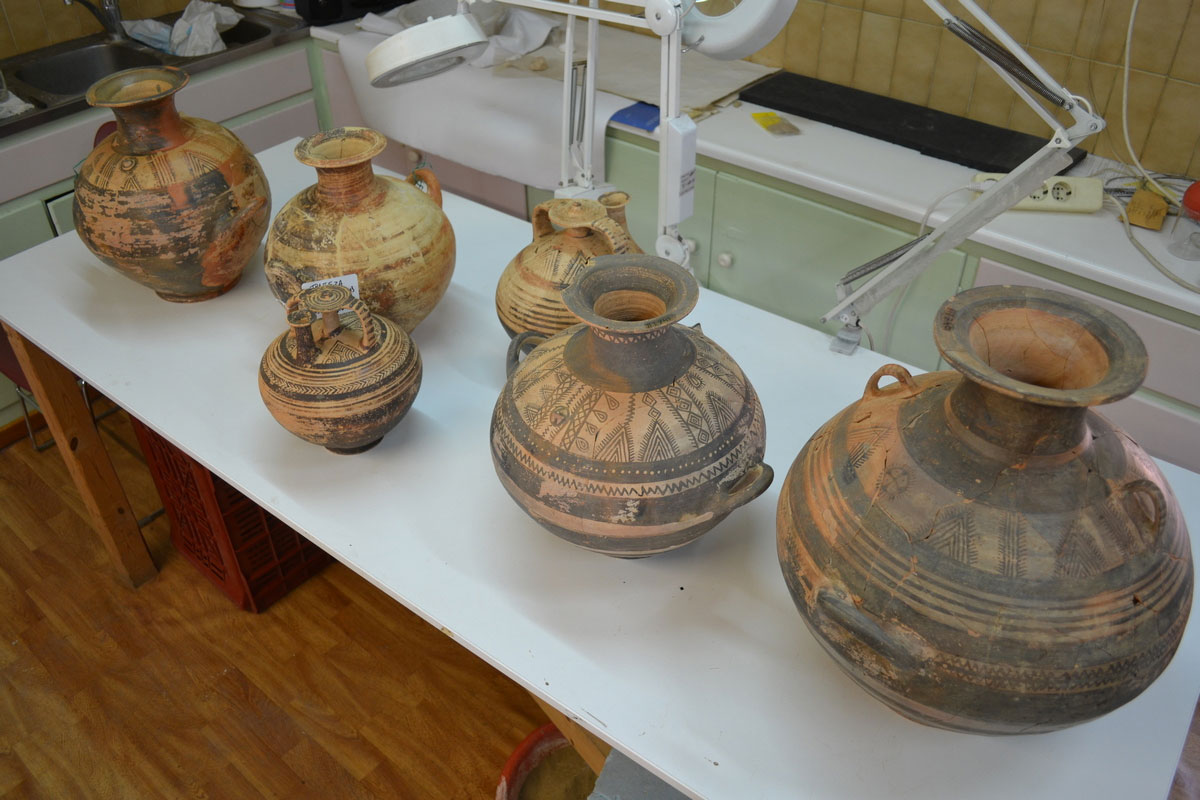 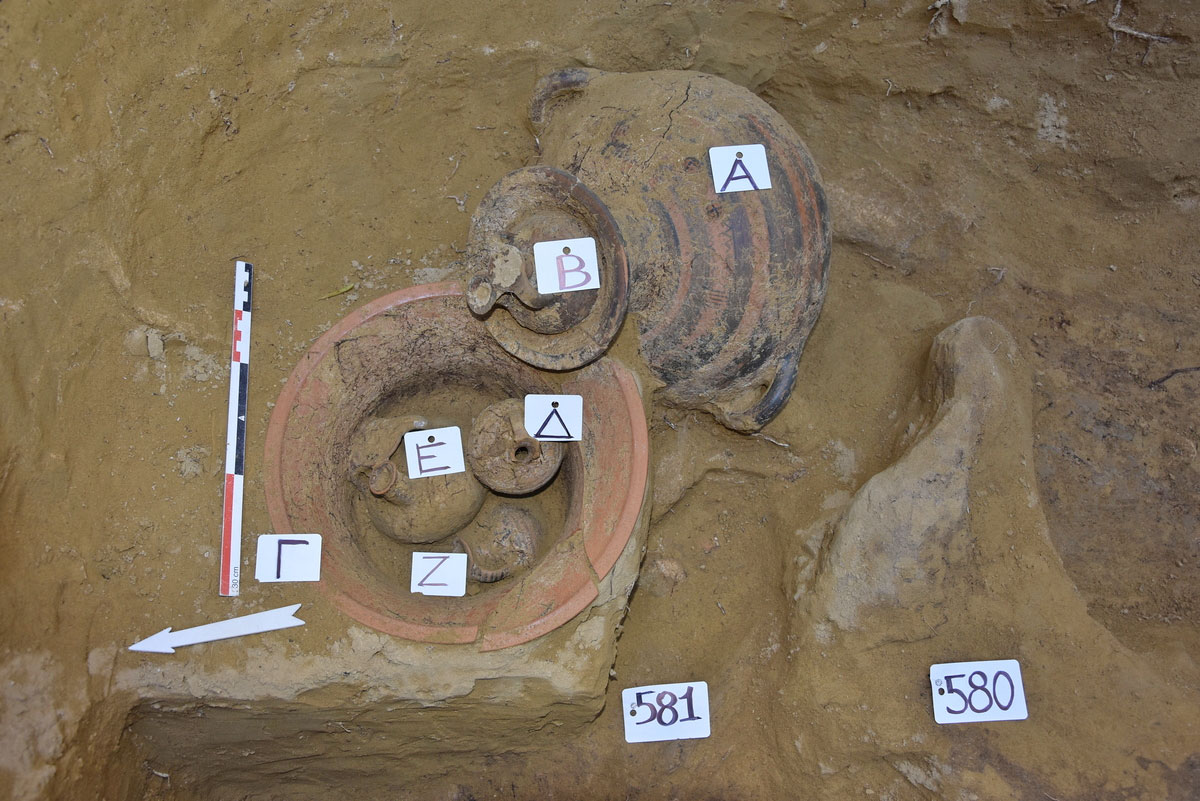 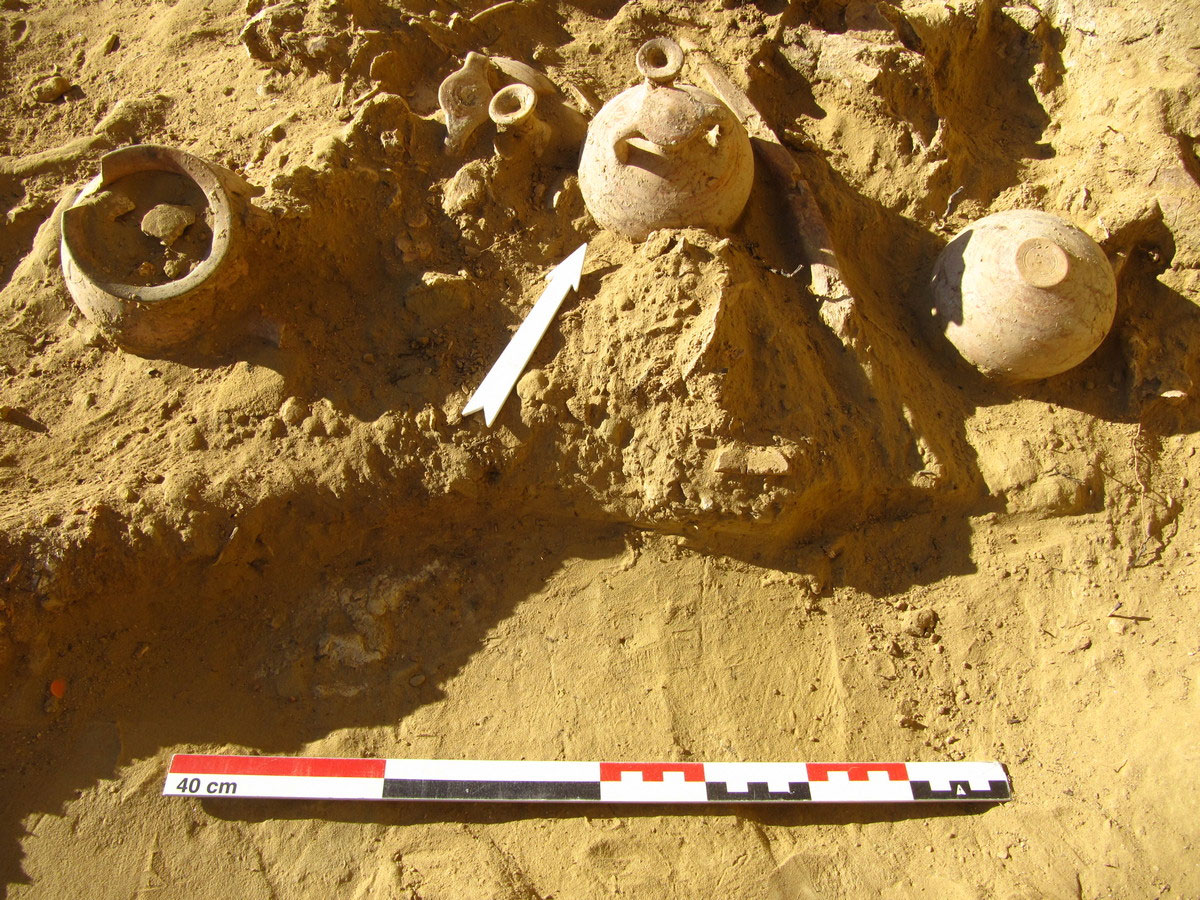 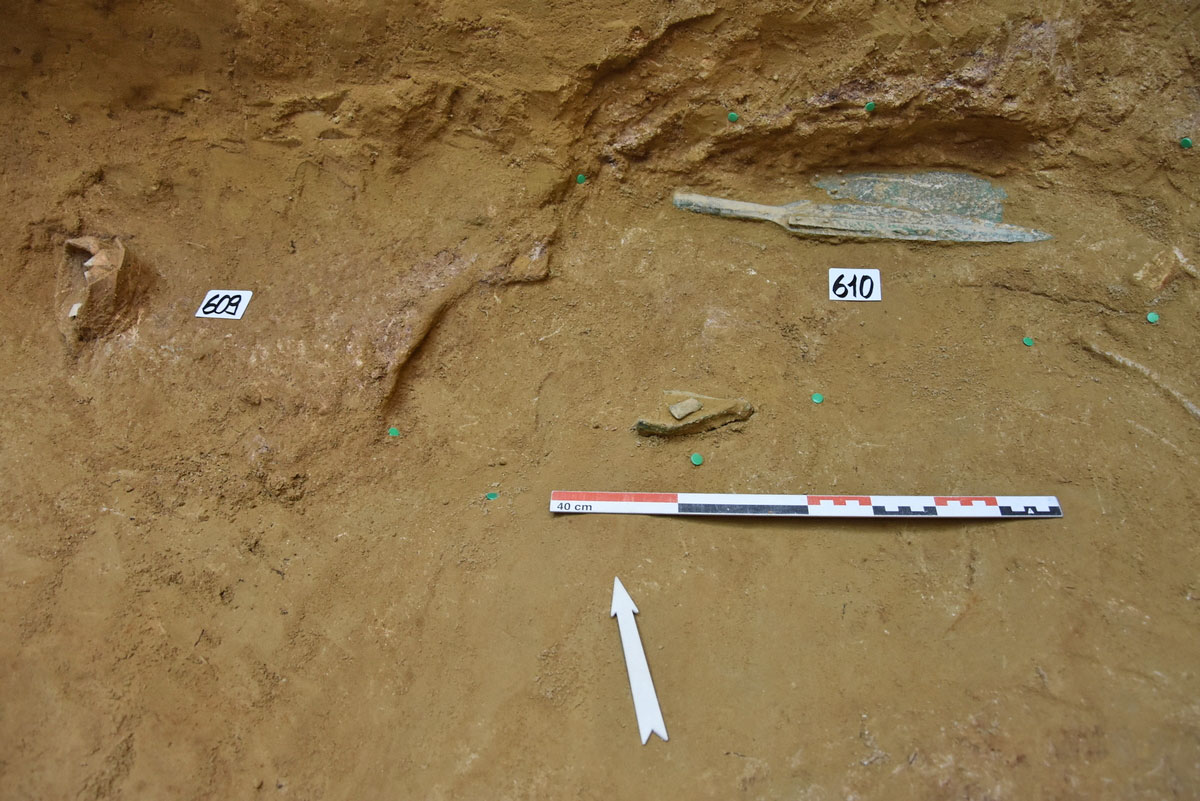 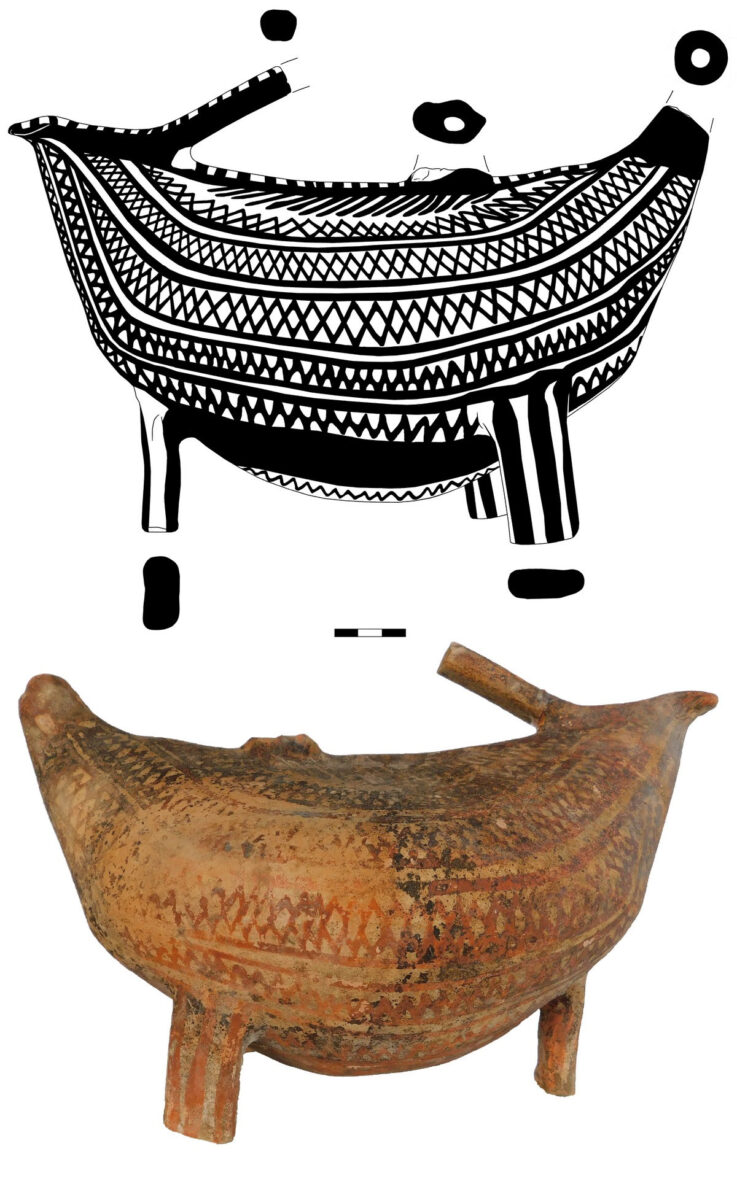 The necropolis of Trapeza, Aegion, comes to light

A large number of grave offerings and high-quality burial items were discovered during the five-year excavation programme at the Mycenaean necropolis of Trapeza, seven kilometers southwest of Aegion. The findings testify to the region’s amazing cultural and social vitality. The plateau is identified with the city of Rhypes, the metropolis of Croton in Magna Graecia during the colonization of the 8th century BC.

The Mycenaean necropolis is located on the southwestern slope of the plateau and on the ancient road leading to the citadel of historical times. The excavated tombs are arranged on at least three levels of terraces along the south side of Trapeza, a few meters from each other, in a parallel arrangement and with a north-south orientation. These are chamber tombs carved into the soft rock of the subsoil.

The necropolis comprises tombs with chambers no wider than 3.5-4 meters and streets not exceeding a length of 6-7 meters and a width of 1.5 meters. The burial chambers have various shapes; circular, rectangular and even almost quadrangular with rounded corners and walls with irregular contours. Elongated pits were unearthed below the chambers, carved niches in the streets’ retaining walls for the secondary deposition of older burials, as well as elliptical or square pits dug in the street surfaces which were found to be empty and could have been originally been carved for concealing ritual ware. The side chambers in the streets of the tombs where children were buried are of particular importance.

The tombs were used repeatedly and over a long period of time. The tomb chambers collapsed in historical times, between the Geometric and Archaic period, as indicated by the artefacts found in “craters” formed in the ground owing to the collapse of the chambers’ roofs.

The necropolis, founded in the LH IIIA 1 period, experienced its heyday during the Early Palatial period of the Mycenaean world, i.e. in parallel with the heights reached by the great centers of Mycenae, Tiryns and Pylos. A significant reuse of the tombs dates back to the 12th century BC, during the Post-Palatial period, probably after the early LH IIIC, when the tombs were repeatedly reopened, being at the same time a place of burial customs and complex ritual practices until the end of the Bronze Age, probably in the advanced Sub-Mycenaean period.

The quality of the finds of the Mycenaean necropolis of Trapeza is proved by the valuable sets of vessels that show a dependence on palace standards but also autonomous links with other regions, from the western Peloponnese to Crete. The grave goods are enriched with numerous seal stones and all kinds of beads and tesserae from various materials – glass, faience, gold, carnelian, rock crystal – that make up necklaces and ornate jewelry, ox head shaped gold-amulets indicating trading relations with the eastern Aegean and Cyprus.  A few tombs show elements of elitism, declaring social prestige and a possible connection with the palaces especially by a valuable combination of weapons and tools.

The Post-Palatial period from the 12th century BC.and after includes various phases of use, which impress mainly for their ritual practices. These relate to the treatment of the bones and remains of the former deceased, who are regarded as glorious ancestors and become the recipients of offerings. The purpose of these ceremonies is to create a genealogical bond by activating the memory of a past perceived as an integral part of the community.

Moreover, the findings from the backfills of the streets of tombs provide exclusive evidence of social practices that are a milestone in the conducting of a funeral, but also of rituals such as offerings and libations in front of the sealed chamber doors during posthumous visits to the tombs. Thus, the necropolis also becomes a place for transmitting traditions and a collective memory.

The location of the Mycenaean settlement of Trapeza is not yet clear. During the early cycle of use of the necropolis, the settlement was possibly situated on a hill, about 100 meters south of Trapeza. Today, research of a Middle Helladic settlement is in progress at this site, yielding sporadic evidence of Mycenaean pottery.

The systematic excavation of Trapeza in Aigion, is headed by Dr. Andreas G. Bordos of the Ephorate of Antiquities of Achaia. Participating in the interdisciplinary research programme of the Mycenaean necropolis are Elisabetta Borgna, Professor of Aegean Archaeology at the University of Udine, with a group of students from the Universities of Udine, Trieste and Venice, as well as postgraduate students from Greek universities.