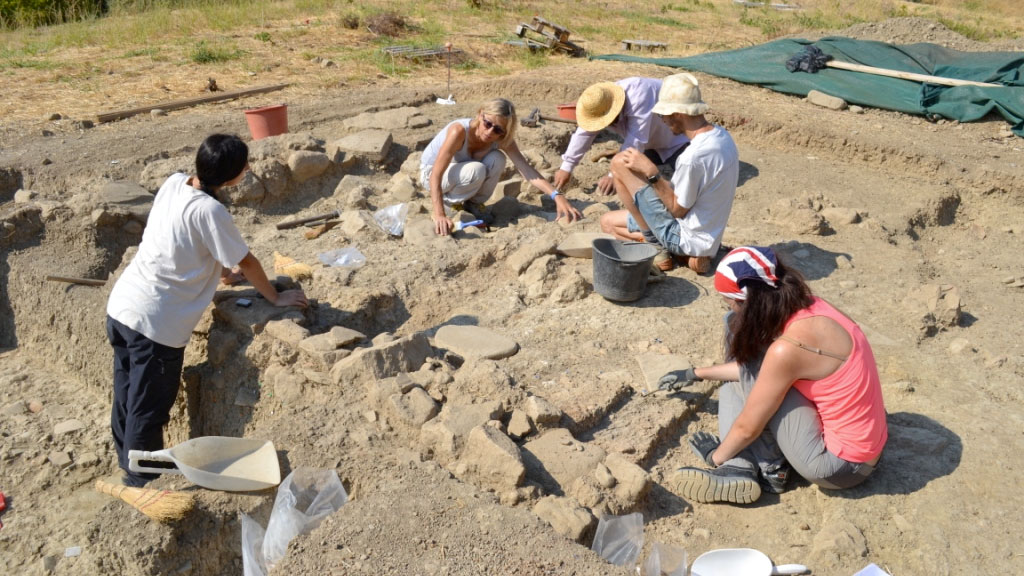 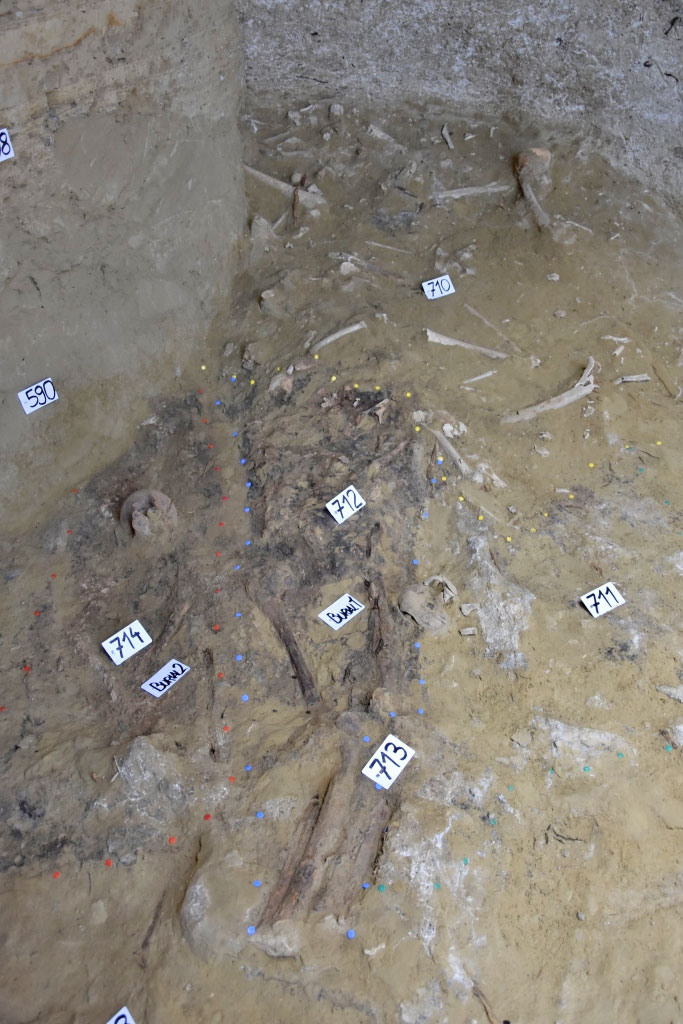 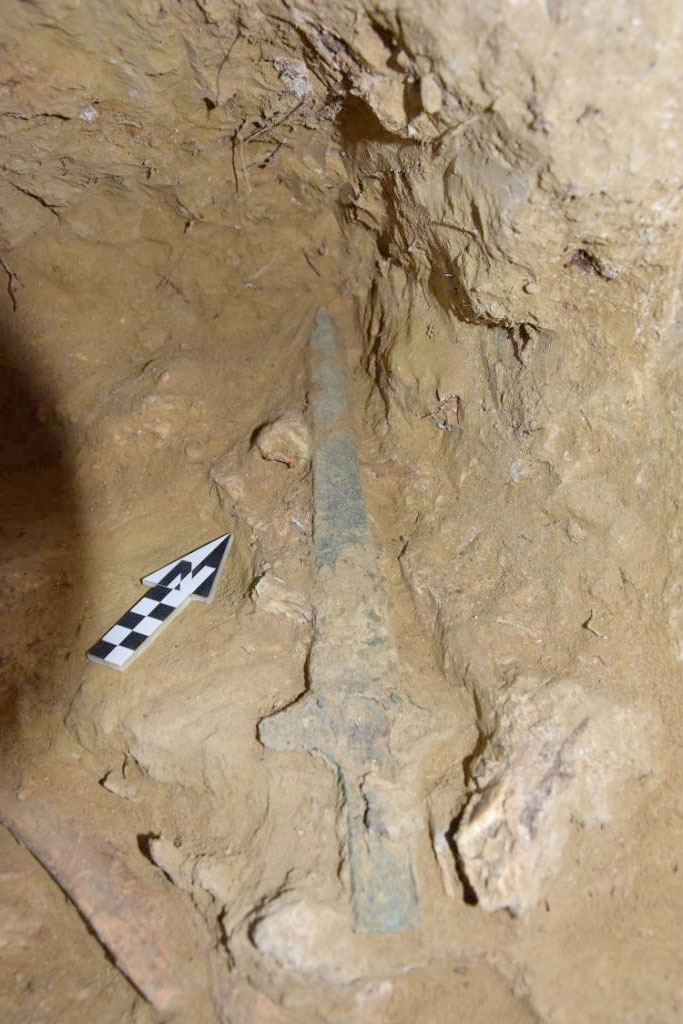 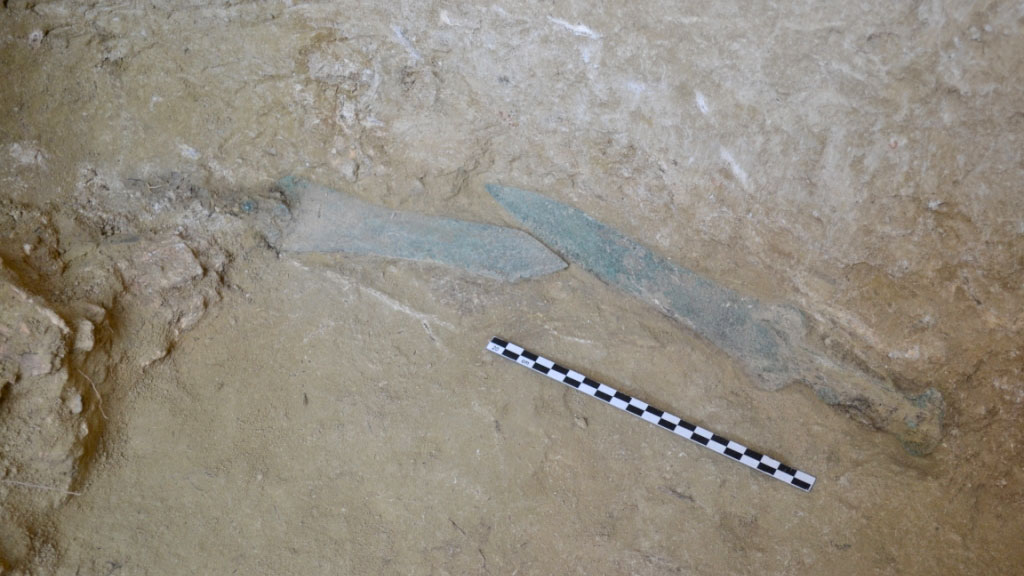 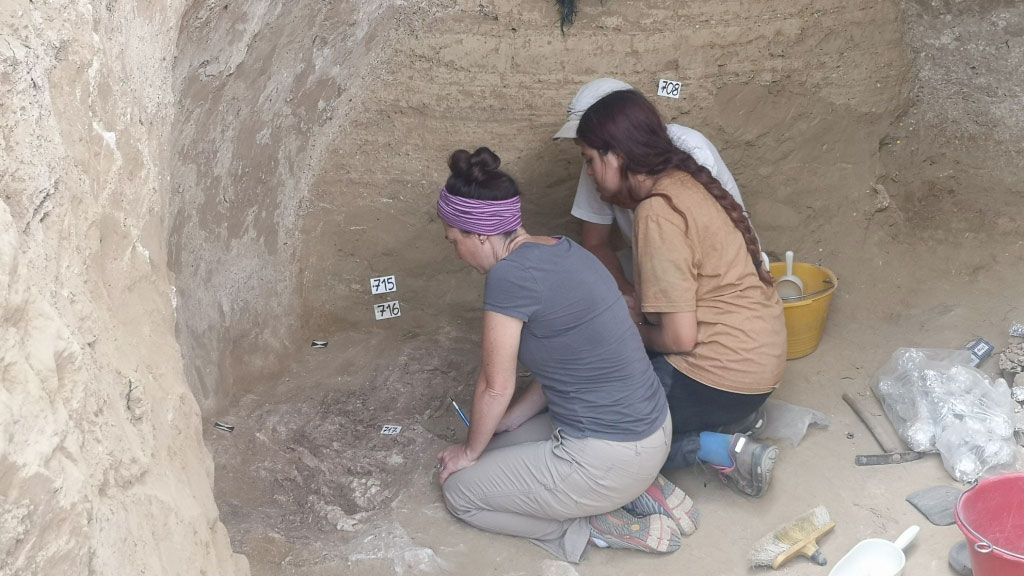 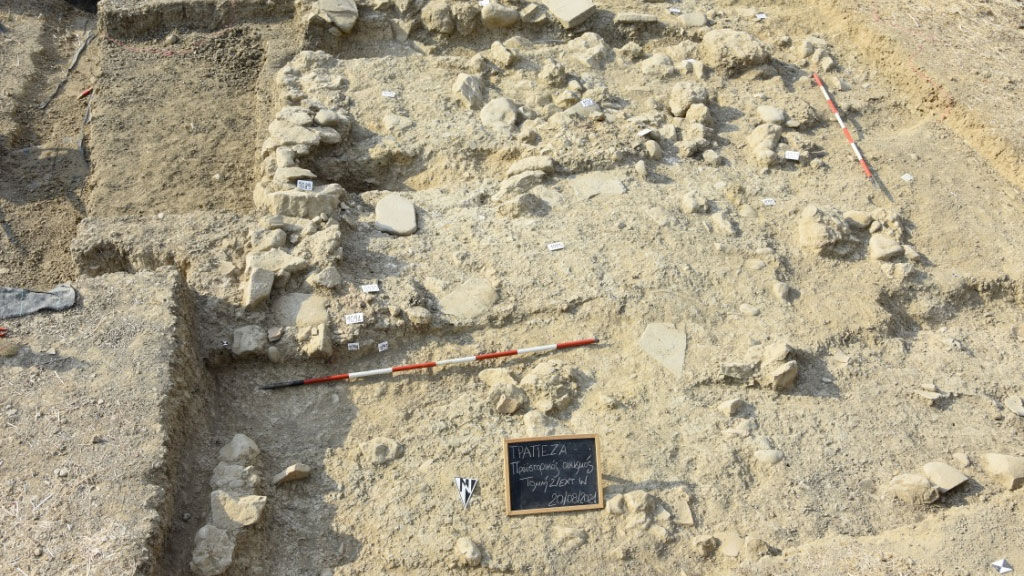 Trapeza: grave offerings and bronze swords have come to light

The first phase of the excavation survey has been completed

The first season of this year’s excavation on the Trapeza plateau, eight kilometers southeast of Aegion, has been completed, bringing to light, among other things, valuable assemblages of grave gifts and bronze swords. The site has been identified as Rhypes, a city that flourished in early historical times and participated in colonization, founding Croton in Magna Grecia.

The excavation focused on investigating the Mycenaean necropolis which extends across the plateau’s southwestern slope and is located on the ancient road that led to the acropolis of historical times. The tombs are chambered, carved into the soft sandy subsoil. Already during the Early Palace period of the Mycenaean world, their use was long and intensive, in parallel with the prosperity of the great centers of Mycenae, Tiryns and Pylos. Significant reuse of the tombs dates back to the 12th century B.C. when they were repeatedly reopened, being at once a place for conducting burials and complex ritual practices until the end of the Bronze Age in the 11th century BC.

The excavation of the necropolis has yielded valuable assemblages of grave gifts consisting of vases, a number of seal stones and all kinds of beads and tesserae of various materials – glass, faience, gold, carnelian and rock crystal – for the making of necklaces and ornaments such as the gold talismans shaped like bulls’ heads, suggesting trade relations with the eastern Aegean and Cyprus.

The rectangular shaped chamber of tomb 8, investigated this year, presented a complex stratigraphy. In the first layer of tombs of the 12th c. BC, three burials containing stirrup jars (amphorae) were investigated in situ. The bones inside the older tombs had been removed and placed reverently and very carefully in two successive piles at the back of the chamber, in contact with the walls of the tomb. Three decorated clay alabastron flasks and an amphora found on top of these bone collections, date these first burials to the Early Palace period (14th century BC).

An exceptionally wellpreserved bronze sword had also been placed among the bones and offerings such as carnelian and glass beads and a clay horse figurine that accompanied these earlier burials. At the base of the pile of bones two more intact bronze swords were also found with part of their wooden grips/handles. The three swords belong to different types, namely Sandars D and E, and date back to the heyday of the Mycenaean Palace period. The presence of these weapons as well as the long spears of the same time period found during the excavation in neighbouring tombs in theTrapeza necropolis is particularly important. It is distinguished from the other necropoleis of Achaia, emphasizing the direct dependence of the local community on the powerful palace centers. The weapons are products of the palace workshops, perhaps of Mycenae, thus consistent with the genre of the homeric epos and the mythological tradition handed down to us. According to the latter, Achaia belonged to the kingdom of Agamemnon who as ruler of Mycenae gathered the men of most value in neighbouring Aegion to discuss how the campaign against the state of Priam should take place.

The location of the Mycenaean settlement of Trapeza is still not entirely clear. Probably, during the early cycle of use of the necropolis, the settlement was situated on a hill about 100 meters south of Trapeza. This year, at the same time as researching the Mycenaean necropolis, the excavation of an area of the settlement revealed part of a building, perhaps a mansion. It is a wide rectangular chamber with a hearth in the center and typical pottery that dates it to the 17th century BC.

The excavation at Trapeza, Aigion (ancient Rhypes) is led by Dr. Andreas G. Vordos, archaeologist of the Achaia Ephorate of Antiquities. Participating in the interdisciplinary research programme of the Mycenaean necropolis and the prehistoric settlement is Elisabetta Borgna, Professor of Aegean Archaeology at the University of Udine with a group of students from the Universities of Udine, Trieste and Venice, as well as postgraduate students from Greek Universities.

The main sponsor of the excavation at Trapeza Aigialeias (ancient Rhypes) is the A.G Leventis Foundation. The excavation work is also supported by Olympia Odos SA.