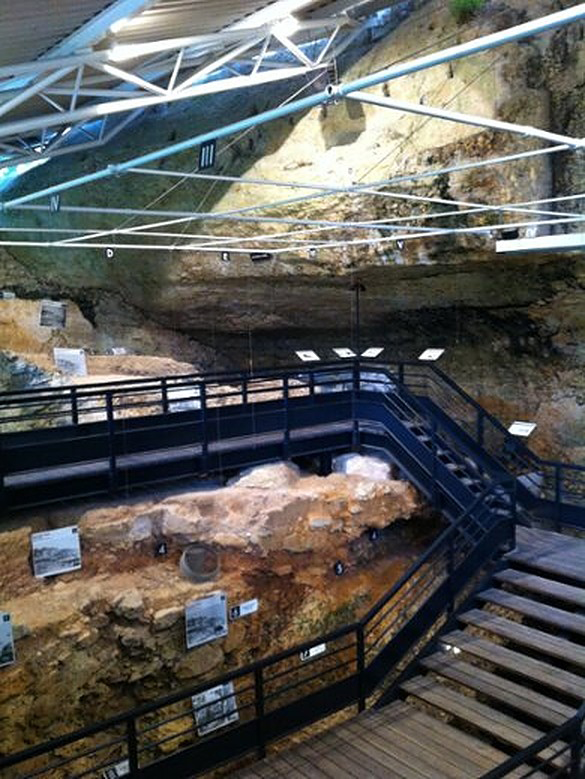 Building a fire involves many variables, such as size, choice of fuel, temperature, and burn time, that affect the way the generated heat can be used, and therefore the potential function of a fire. A group of Leiden archeologists are, together with a team of international colleagues, investigating remains of Palaeolithic hearths in order to characterize the use of fire by our distant ancestors. Results of this project, initiated by the late Freek Braadbaart, were recently published in the Journal of Archaeological Science. We spoke with one of the authors, ancient fire expert Femke Reidsma.

Eighteen Upper Palaeolithic hearths from the famous site of Abri Pataud were analyzed. Abri Pataud is a rock shelter with a well-preserved sequence, located in the Southwest of France. “These prehistoric hearths consist of ashy material, highly fragmented charcoal, and heated bone,” Femke Reidsma explains. Using a combination of new techniques and reference data, the researchers explore the remains’ clues on the application of the fire. “We can now analyze the materials to get to the heating conditions of former fires.”

A better understanding of these heating conditions may lead to a better understanding of the fire’s application. “We assume that fire temperature can be related to what people did with fire in the past. A variation in fire conditions equals a variation in human behaviour.” While Reidsma focused on developing analytical techniques on bone material, her colleague Freek Braadbaart explored charcoal. Other experts investigated molecular traces in the ashes and sediments.

“As principal investigator, Freek Braadbaart integrated the data to get a better understanding of the heating conditions and preservation of the fireplaces. After Freek’s passing, with Wil Roebroeks I took over this role, and after a lot of diggng through Freek’s files we were able to finish the paper together with the other authors.”

It is commonly assumed that if things have been heated, that they stay the same indefinitely and preserve very well. However, this is not the case. Experimental work by both Braadbaart and Reidsma has shown that chemical weathering affects the way heated materials preserve. “Knowing this, we explicitly took the effect of diagenesis into account in our study of the fireplaces of Abri Pataud. This helped us arrive at more accurate interpretations of the heating conditions.”

The investigation expanded, including the study of sedimentary DNA by colleagues from the MPI-EVA at Leipzig, to better understand the owners of the fireplaces. This led to the find of the first sedimentary DNA evidence of early modern humans. “We combined macro and micro scale analysis, and deployed a whole range of analytical techniques to get to the most complete picture.”

So what is the most complete picture? “Mainly a more complex and nuanced picture of the fire. There were changes in heating temperature over time, for example, between roughly 35 and 25,000 years ago.” In addition, the majority of the bone was found to be heated indirectly. “For a long time people have assumed, based on the high percentage of heated bone, that bone was used as fuel.”

According to this perspective, a scarcity of wood in the glacial world led to this development. “You have to realize that bone is a very inefficient fuel, due to its high inorganic content, and that it also makes no sense to hunt for your fuel. The most probable explanation is that the bones were located in a layer of refuge of an earlier occupation phase, that the fires were built on top of.”

The charcoal analysis also gave new insights. “We found evidence for an alternative fuel in the charred organic material samples: microscopic pieces that resemble dung.” This would fit ethnographic precedence, as well as the circumstances of ice age Europe. “If it is true that there was not enough wood, people could have used reindeer dung. We found only two or three pieces, so the evidence is limited. Even so, it’s the oldest indication of dung used as fuel so far.”

Summarizing, Reidsma concludes that the main takeaway of this approach is that it is the way forward. “By combining the results from different methods and different materials we got a much clearer and complete picture than we would have gotten if we only looked at the charcoal or the bone. In terms of archeological interpretations, we confirmed suspicions that were already there. The discovery of the dung and the debunking of the bone-as-fuel theory also have implications for other sites.”

Freek Braadbaart did not live to see the publication of this paper. “He sadly passed away in December 2018. This paper is the crowning work on his research, and I am happy we were able to finish it for him. This paper very clearly shows his vision on how you are supposed to study fire use: holistically, combining all methods and materials.”