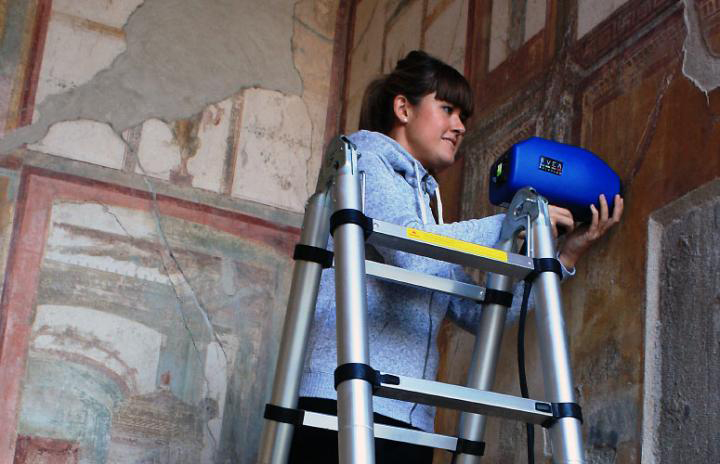 The paintings of Pompeii

Pyroclasts protect them buried but damage them when they are unearthed

The ancient city of Pompeii (in the south of Italy) ended up buried under ash and volcanic material in 79 CE as a consequence of the eruption of Mount Vesuvius. That fateful event made the unprecedented conservation of the archaeological site in the area possible because the pyroclastic materials spewed out by Vesuvius have protected the remains from external damage. So not only in cultural but also in scientific terms they are in fact highly prized sites where tourists and professionals of archaeology and even chemistry mingle.

For over 10 years the UPV/EHU’s IBeA group, attached to the department of Analytical Chemistry, has been working at Pompeii within the framework of the Analytica Pompeiana Universitatis Vasconicae-APUV project. In 2015 the UPV/EHU and the Archaeological Park of Pompeii signed the first of the agreements thanks to which the methodologies and portable devices used by the research group are allowing the paintings to be analysed using non-destructive techniques.

Various studies conducted at the House of Marcus Lucretius, the House of Ariadne and the Casa degli Amorini Dorati or House of the Golden Cupids have concluded that “salts are responsible for the worst and most visible damage to the murals. In the end, the salts may dissolve and as a result material such as pigments, the pictorial layer, the mortar, etc. may be lost”, said Maite Maguregui, lead researcher in this study. In this respect, the researchers have concluded that the leached ions from the pyroclastic materials and the ion-rich underground waters from the volcanic rocks promote the crystallization of certain salts.

“While the paintings remain underground, they are protected by the pyroclasts; but once they are brought to the surface, the salts start to form owing to the effect of the air, humidity, etc. So in order to conserve the mural paintings it is important to know in each case what the salt load of the surrounding pyroclasts is to be able to block, reduce or prevent potential damage. In fact, in Pompeii a large proportion remains buried and waiting to be studied,” added Maguregui.

Fluorine marking the impact of the volcanic materials

“When the volcano erupted, it spewed out huge quantities of materials and the pyroclastic material is not homogeneous across the whole area; many different strata can be found,” explained the researcher. Mineralogical analyses of samples collected at various points were made in the study, and the compositions of the leachates were determined. Thermodynamic modelling was also carried out to predict which salts can precipitate as a result of leaching and to determine their origins. It was concluded that the salts provided by the modelling coincide with those detected in the paintings.

The salts analysed in the murals contain fluorine ions, among other things. “Fluorines are ions of volcanic origin; it is not one of the main elements in the atmosphere. The emergence of fluorine salts indicates that the volcanic materials and the subterranean waters are exerting an influence on the crystallization of these salts,” she explained. “So with the fluorine found in the mural it is possible to trace the impact that has been exerted and continues to be exerted by the pyroclasts and the subterranean waters on the paintings.” The group’s next aim would be to “map the murals on a large scale to see the extent of the salts and also to be able to determine the steps to be followed by the conservation staff when they unearth a mural painting”, she added.