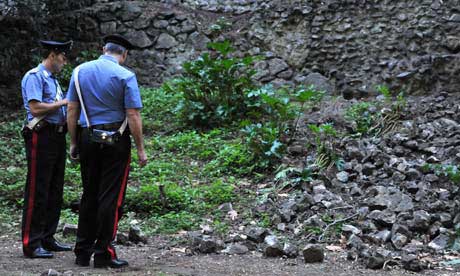 Part of a Roman wall has collapsed at Pompeii, one year after a house there crumbled, prompting accusations that the Italian government has failed to keep promises to protect the ancient site.

During heavy rain on Friday, an eight square metre section of a perimeter wall crumbled near Nola Gate.

It is the latest in a series of incidents including the fall of the House of the Gladiators last November, which Unesco criticised and which led the government of Silvio Berlusconi to vow that upkeep would improve.

“A year after the collapse of the House of the Gladiators nothing concrete has been done,” Italy’s national association of architects said in a statement. “There is a continued lack of ordinary maintenance, which is the only way to save the site. Our fear is that the coming months will see ever more frequent and serious incidents.”

Culture minister Giancarlo Galan blamed “violent rains” and said only the outside layer of the stone wall had fallen, leaving the structure intact. The EU, he added, was about to provide €105m (£91m) for safeguarding the site.

But one expert said a year-old pledge to hire new staff at Pompeii had not been kept. “Money and people were promised, but despite frequent announcements, neither arrived,” said Maria Pia Guermandi, a council member at Italian heritage organisation Italia Nostra.

“The hiring of new archaeologists to help protect the site was included in a new bill recently but was then omitted from the final text. In the meantime, funds have actually been diverted to support museums in nearby Naples.”

Teresa Elena Cinquantaquattro, superintendent of the site, said she was awaiting the arrival of 25 archaeologists.

Guermandi said the partial collapse of the wall had been caused by water infiltrating the stonework. “All it would have taken to prevent this was some waterproofing on top of the wall – simple, regular maintenance,” she said.

“Instead of waiting for €100m, the government could have freed up €10m to get started immediately.”

Tsao Cevoli, president of the Italian association of archaeologists, said Pompeii’s buildings, which were excavated in 1748 and are renowned for their well-preserved state, were now falling apart on a daily basis.

“Every morning the custodians collect pieces of crumbling walls and hide them before the tourists arrive, to stop tourists taking them away and to hide the real situation.”

Guermandi said archaeological sites across Italy were at risk as Berlusconi’s government pushed through budget cuts.

“Take for example the Forum in Rome and the underground spaces at the Colosseum, which were both completely flooded by the rains last week,” she said.