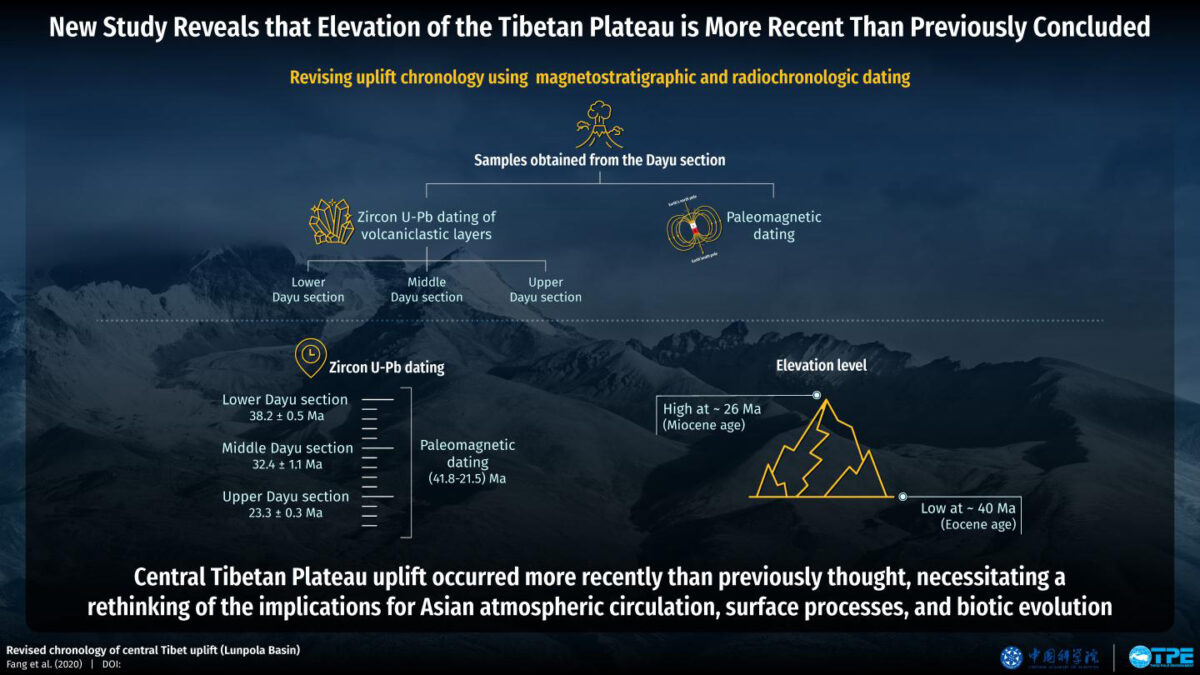 “Birthday” of the roof of the world recalibrated

As the roof of the world, the Third Pole centered on the Tibetan Plateau can be easily considered a permanent presence. However, it is not. The place where Mount Everest stands today was once underwater. Exactly when the Third Pole grew to its current height has been a topic of debate for years. However, a recent study published in Science Advances proves, through fossil analysis, that much of the Third Pole only grew to its modern height over the past 10 million to 20 million years, rather than 40 million years ago (Ma) as previously inferred.

Using magnetostratigraphic and radiochronologic dating, the study found that low-elevation tropical fossils retrieved from the central Third Pole were deposited about 40 million years ago. However, an analysis of paleosols (fossil soils) using oxygen paleoaltimetry showed that paleosols corresponding with the elevation of the present day date from about 25.5 Ma to 21 Ma, rather than over 35 Ma – the figure often previously used to date the age of the Tibetan Plateau.

“This means the Third Pole was still lower than 2300 m about 40 million years ago,” said FANG Xiaomin, lead author of the study from Institute of Tibetan Plateau Research (ITP), Chinese Academy of Sciences (CAS). “It only grew to 3500 m and above around 26 million to 21 million years ago.”

“What we found is not entirely news,” observed FANG, referring to findings of the First Tibetan Plateau Expedition and Research (FTEP). That project, which dated from the 1970s and was CAS’s first to focus on the Third Pole, had already suggested approximately the same period for the “birth” of the plateau, based on research involving over a thousand scientists from 18 countries. However, the FTEP finding was largely discredited and discarded over the years as later oxygen-isotope-based estimates argued that a fully elevated plateau existed at least 35 million years ago. Interestingly, FANG’s study, which “reconciles the FTEP results,” was actually part of the Second Tibetan Plateau Expedition and Research (STEP), a science project launched in 2018 by CAS to reassess the environment of the Third Pole given rapid climate changes over recent years.

The much debated “birthday” of the roof of the world is not just an academic issue concerning how the Third Pole uplifted over history. It also helps shape our understanding of several processes highly relevant to regional and global climate. These include continental collision and uplift geodynamic mechanisms, Asian atmospheric circulation, surface processes and biotic evolution. With this recalibrated elevation history, there is still much rethinking to do.