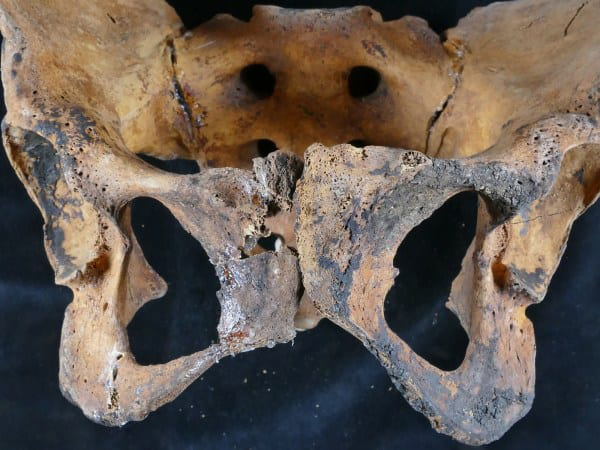 Scientists from the Universities of Granada and Jaén are studying the physical evidence found in the mummified remains of a woman who suffered severe trauma to the pelvis in 1878–1797 BC, linking them to a medical treatment described in various Egyptian medical papyri of the time.

During the Qubbet el-Hawa Project, led by the University of Jaén (UJA) in Aswan (Egypt), in which scientists from the University of Granada (UGR) are participating, researchers have found evidence of the oldest gynaecological treatment on record, performed on a woman who lived in Ancient Egypt some 4,000 years ago and died in 1878–1797 BC.

During the 2017 archaeological dig organised in Qubbet el-Hawa, on the western bank of the River Nile, Andalusian researchers found a vertical shaft dug into the rock in tomb QH34, leading to a burial chamber with ten intact skeletons.

Mummification techniques were not very effective at that time, at least at this site in Upper Egypt. However, the individuals buried there generally belonged to the upper classes of society meaning that they would have been given special care. These particular mummies are very well-preserved and are wrapped in thick layers of linen strips, sometimes bearing remnants of dried soft tissue.

“The mummies had grave goods (usually necklaces of different types); in some cases, their faces were covered with cartonnage masks; and they were preserved inside two rectangular sarcophagi, one inside the other. These featured hieroglyphic inscriptions and were typically badly damaged due to termite infestation,” explains Miguel Botella, forensic anthropologist and Emeritus Professor at the UGR, who conducted the analyses.

One of the mummies excavated by the team of anthropologists was perhaps the last to be buried in the chamber. It belonged to a woman of high social class, whose name, Sattjeni, has been preserved in the remains of the outer coffin. That name must have been common among the upper classes of the region, perhaps explaining why she was named Sattjeni A.

Between her bandaged legs, in the lower part of the pelvis and beneath the linen wrappings, the researchers found a ceramic bowl with signs of use, containing charred organic remains. The analysis of the skeletal remains was carried out by a team of anthropologists from the UGR (coordinated by Professor Botella) and it confirmed that the woman had survived a serious fracture in her pelvis, perhaps caused by a fall, which must have caused severe pain.

It is highly likely that, to alleviate these pains, the woman was treated with fumigations, as described in medical papyri of the time describing solutions to gynaecological problems.
“The most interesting feature of the discovery made by the researchers from the University of Jaén is not only the documentation of a palliative gynaecological treatment, something that is quite unique in Egyptian archaeology, but also the fact that this type of treatment by fumigation was described in contemporary medical papyri.

But, until now, there had been no evidence found to prove that such treatment was actually carried out,” explains the UJA’s Dr. Alejandro Jimenez, an expert in Egyptology and director of the Qubbet el-Hawa Project. This work has now been published by one of the most prestigious academic journals in Egyptology, Zeitschrift für Ägyptische Spracheund Altertumskunde.

The project was funded by the Spanish Ministry of Science and Research, Fundación Gaselec, Fundación Palarq, the Calderón Group, and the Spanish Association of Egyptology.