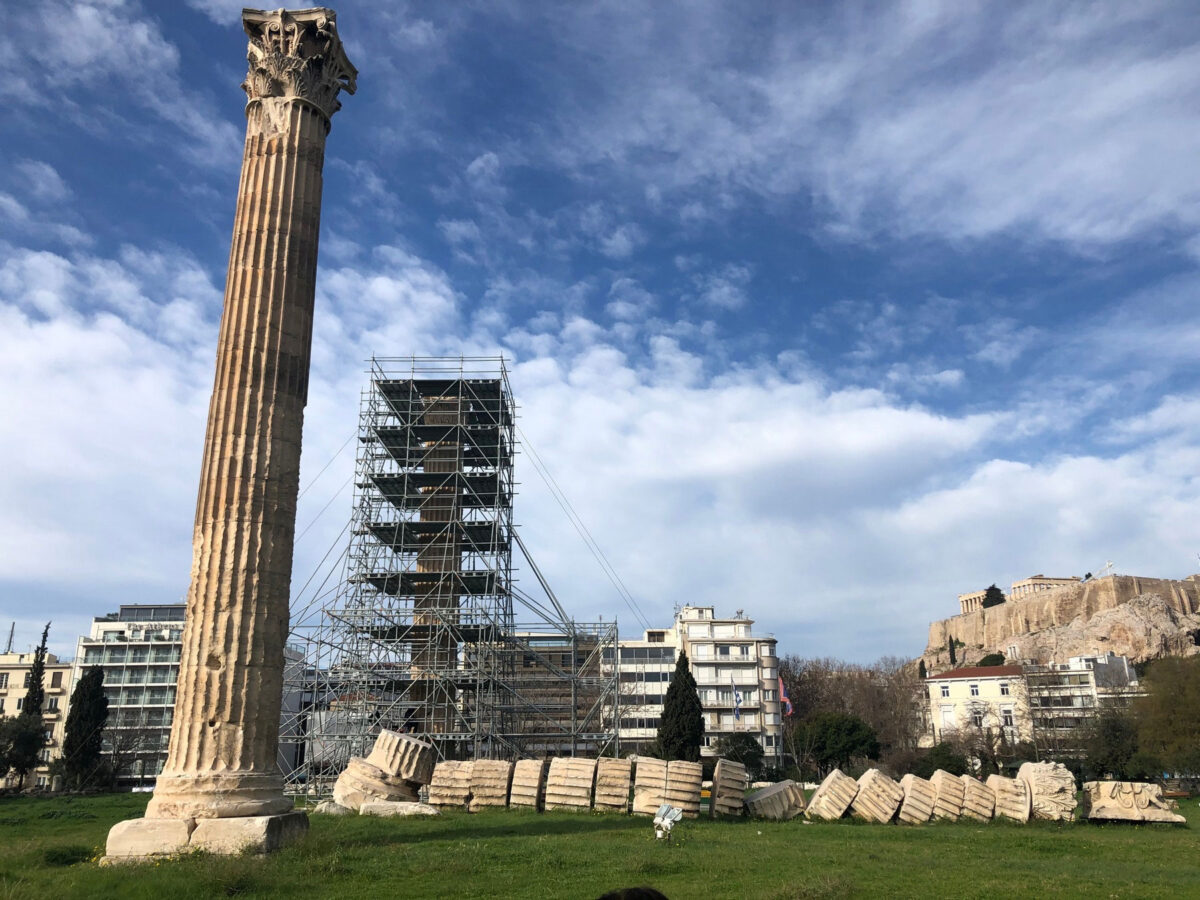 Inspection of conservation works at the Olympeion

Inspection of conservation works at the Olympeion

The Ministry of Culture and Sports announced that Minister Lina Mendoni made an inspection of the project for the “stabilizing and conservation of the Temple of Olympian Zeus”.

The Minister, accompanied by Secretary General of Culture George Didaskalou and Ministry staff, inspected the recently completed 17 meter high scaffolding, on the westernmost column of the Temple of Olympian Zeus in Athens. The scaffolding was constructed as part of the programme of the Athens Ephorate of Antiquities for stabilizing and conserving  the standing parts of the monument. The scaffold allows to map the real stability of the 17m high column for the first time, making detailed documentation of its structural pathology possible and realizing the programme of its structural stabilizing and conservation.

While inspecting the Olympeion archaeological site, Ms Mendoni said that “this is a project with many difficulties appearing in many cases while the work evolves. The Ministry services are making every possible effort to carry out and complete the works within the planned schedule. Given the unforeseen difficulties, we are here to provide immediate solutions and coordinate those involved in implementing and managing the project”. Ms Mendoni requested that the Athens Ephorate of Antiquities step up the work and comply with the timetable.

In such a large scale monument, diagnosed with chronic problems of structural stability and the escalating deterioration of its material, the only way to verify immediate and medium-term protection measures is by constructing a scaffold, so allowing its condition to be examined at close quarters. For this reason, heavy-duty scaffolding will be shortly constructed on all the standing columns and entablatures with serious problems in the monument’s southeast corner, for the immediate start of scheduled conservation work.

Hadrian’s Temple of Olympian Zeus in Athens,of the Corinthian order, made of Pentelic marble, was one of the largest in the ancient world. It was 110.35 m long, 43.68 m.wide , with two rows of 20 columns on the long sides and three rows of 8 columns on the narrow ones, all 17 m high. It commanded the centre of a large rectangular enclosure with a propylon/monumental gateway to the north. The nave housed two huge ivory statues of Zeus and the emperor Hadrian that were worshiped at the same altar, while numerous statues and votive offerings adorned the enclosure.

It includes works of structural stabilization, restoration and conservation of the Temple’s standing marble columns and entablatures and the configuration of its surrounding area.  As part of the same programme, archaeological research is being conducted opposite the western enclosure of the ancient sanctuary.