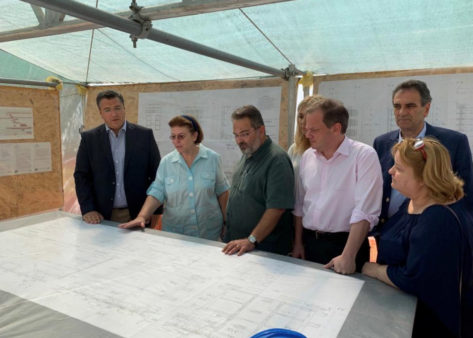 ‘The Kasta Tomb is an extremely rare and significant monument’

Newly appointed Minister of Culture and Sports Lina Mendoni made her first official visit last Friday to the Monument of the Kasta Tomb near Amphipolis. She described the monument as extremely rare, of exceptional historical and archaeological significance but also as a tremendous development resource for the region.

Ms Mendoni, who had been actively involved in the excavation when Secretary General of the Ministry, was briefed by officials both from the Ministry of Culture and the Ephorate of Antiquities of Serres on the progress of excavation work and then paid a visit to the site.

In her statements, the Minister thanked the Central Macedonian Regional Governor Apostolos Tzitzikostas for the Region’s overall support over the years, since the beginning of the excavation to the present, by offering every possible assistance to all scientists working on the excavation.

“All the relevant ministers”, said Ms. Mendoni, “are here to express the government’s overall interest in the monument and the region. Schedules are tight. Works are currently being carried out that should normally have been done in the spring of 2015. With the diligence already demonstrated by the Ministry of Culture executives, we will try to make up for this delay. The objective is to be consistent with the timetables set by the Regional Operational Programme of the Region of Central Macedonia financing the project, so that more resources can be claimed by the Region and supplemented by the Ministry of Culture for comprehensive research to be conducted for the monument’s overall enhancement”.

During the briefing, Ms Mendoni sent a clear message to all bodies involved that the programme needed to increase the take up rate of its funds so that more money could be made available, while she stressed the importance of keeping to a rapid pace to make up for lost time. At some point in her statement she stressed that the archaeological past must become respected, adding however that “if we want to save the monuments, we must run at a rigorous, fast pace “since the archaeological past is one thing and  scientific approach another”.

Lina Mendoni also announced that on December 17, all studies on immediate restoration work at the monument site will go through the Central Archaeological Council (CAC).

The Minister also made a special reference to the expropriations around the Kasta tomb and the burial monument, saying that although they passed through the CAC in 2016, there have been no developments since then and noted that she would propose to negotiate for a direct purchase of the land plots in order to save time. The minister declined to give a specific timetable for when the monument will be open to the public, but stressed nevertheless that if schedules were kept, then the monument could be visited by special groups of the public by the end of 2021.

During the briefing, reference was made to the matter of the monument’s general enhancement, its access by road, its connection with the Egnatia Highway and a sustainable development on the perimeter of its sites.

Enhancing the first finding of the Kasta Tomb

The minister then visited the Amphipolis Archaeological Museum where she was taken round the workshops that carry out the conservation and restoration work of the monument’s findings at the Kasta Tomb. She also saw the head of one of the two sphinxes, situated at the entrance to the monument and temporarily on display in the archaeological museum. Ms Mendoni urged the museum’s director to further enhance this unique finding, saying it was “one of the first findings of this important monument and great attention should be given to its highlighting and promotion”. She also requested that all necessary measures be taken for the archaeological find to be better promoted, “so that the head’s artistic value be made visible”!

She also asked that the lighting be improved of the showcase where the sphinx’s head is on display and corrections/additions be made to the accompanying explanatory inscription.

Employees of both the Amphipolis Archaeological Museum and the Kasta Tomb excavations warmly welcomed the new Minister of Culture, who spoke with everyone — many of whom she knew by their first names, having worked and spent so much time with them, for the excavation to go ahead.

In his statement, the regional governor of Central Macedonia Apostolos Tzitzikostas emphasized knowingly that at the time had passed when the Region itself was  the only institution applying pressure for works on the Kasta Tombin Amphipolis to go ahead. “All of us united”, said the Regional Governor,” both the Ministry of Culture, the Region of Central Macedonia, collaborating ministries and the stakeholders involved are coordinating the completion of the works for this globally important Macedonian monument to open to the public. After many years of delays and the attempt by some parties to have Amphipolis forgotten, we are here with the new Minister of Culture who lead the way in the discovery of this monument and provides a guarantee  for the work not stopping again but  continuing at top speed  with speed to be completed as soon as possible. ”