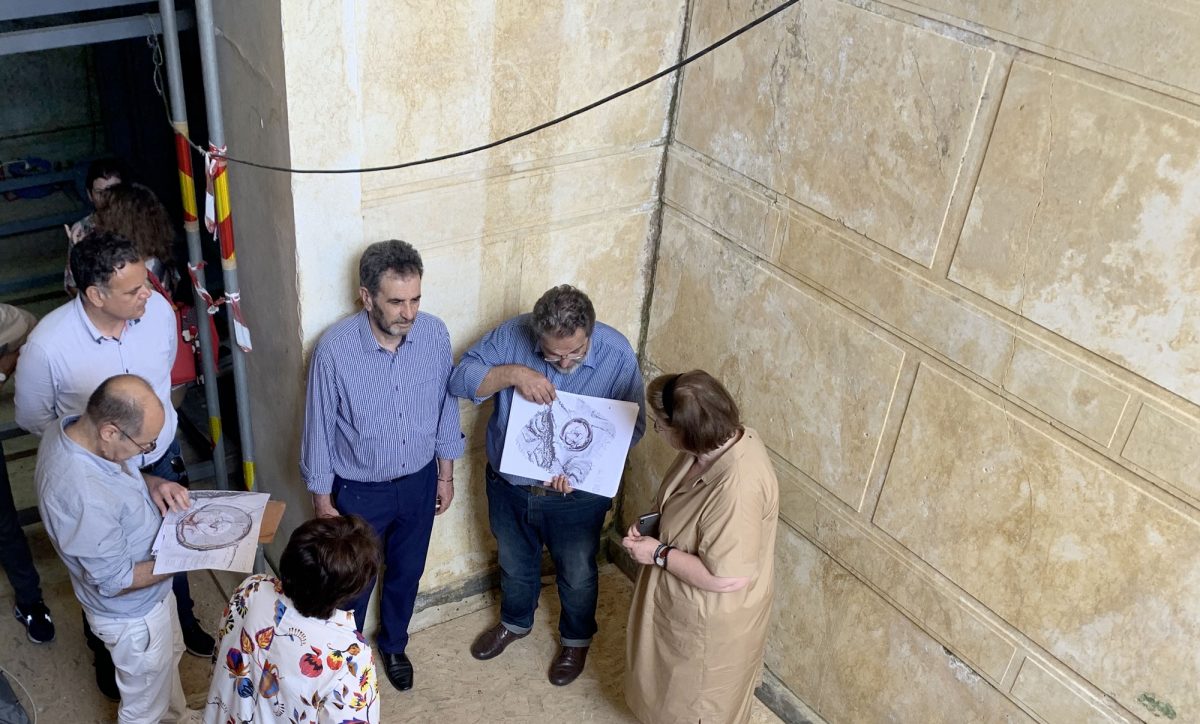 Construction work at Amphipolis in September

Visit by the Minister of Culture and Sports

Approval of the architectural study of the KastaTomb monumental complex after evaluation by the Central Archaeological Council on December 17, 2019, was followed by the completion of the geotechnical investigation round the burial monument by the relevant services of the Ministry of Culture and Sports (MOCAS) and the research team of the Aristotle University of Thessaloniki. Next week, the static assessment and geotechnical study will be completed as planned by the MOCAS’ Directorate for the Restoration of Ancient Monuments.

In an announcement by the Ministry of Culture, the studies are expected to be submitted to the Central Archaeological Council for approval on July 14, 2020.  The aim is to immediately start the tendering procedure for the first phase of stabilizing and restoration works on the monument complex to begin within the second half of September 2020.

“We are here at the Kasta Tomb,” said Culture and Sports Minister Lina Mendoni, “because we had to look at the course of the studies being prepared, their application in the field and the time required to set up the construction sites. I am entirely satisfied because things are progressing as scheduled. Around July 15, the two studies directly related to the first phase of the works will be presented to the Central Archeological Council(CAC). We hope to start, after the works’ tendering  procedures, around the second fortnight of September. The expropriations that should have been  made and had been completely forgotten until last summer, are already in their final phase. I refer to this as an example of the alertness shown by all services of the Ministry. The expropriations  have already been published in the Government Gazette, while we know that similar procedures needed  a number of years”.

At the same time, in order to properly address, in a scientific manner, issues of studies of the monument in progress (static and geotechnical) and to implement the approved – since 2015 – study of land configuration of the Tomb’s slopes, it became necessary to use an updated high-precision topographic background of the Tomb and its greater area.

The preparation of the new background was undertaken by the Department of Topography of the Aristotle University of Thessaloniki, in the framework of a Memorandum of Cooperation signed in March 2020, between the University and the Ministry of Culture. The topographic survey was further processed by the Directorate of Restorations for the studies’ immediate support.

In order to restore the original geometry of the Tomb slopes by shifting large amounts of soil removed from its top during the excavations of the last 60 years and spread around the perimeter, distorting its shape, detailed topographic documentation and measurement of their volume was made. Thus, the exact points have been marked where excavation backfilling must be removed  to restore the Tomb’s ancient geometry. A large part of these backfills will be transferred as close as possible to their original location, in an internationally innovative Tomb restoration project, that makes use of  its original material.

For modern interdisciplinary research on the protection of monuments, this original material is perceived as a monument, just as its gradation and layering in the methods of ancient construction are seen as an integral part of its architecture. This is the reason the Restoration Directorate prepared a three-dimensional, exact model of the Tomb, depicting the initial geometry of its slopes, based on data of the architectural restoration study and the precise volume of soil was removed on which work is to be done, while the corresponding backfills were added. Moreover, the east slopes opposite the monument will be configured and stabilized, so that the best-conserved section of the enclosure can be visited during 2020.

From the search for scattered marble material of the enclosure which was recently transferred to the Tomb, 39 members were relocated to their original places in its southeast section, while 45 members are to be immediately positioned west of the Tomb Monument, as part of the launch of a pilot project for restoring a 12.5 meters long section of the enclosure.

At the same time, the research team of Grigoris Tsokas, professor of the Aristotle University of Thessaloniki, completed the phase of detailed prospecting of the diaphragm walls under the Sphinxes. The prospecting  confirmed the initial hypothesis of the architectural study, prepared by the architect of the Ministry of Culture, Dr. Michalis Lefantzis, on the existence of invisible pillars with congruous half columns to support the architrave , as well as the existence of a base on which the pilaster rests. Namely, in this case there was also a corresponding diaphragm wall with that encountered in the monument’s diaphragm wall with the “Caryatids”. The search continues at this point, so that useful information can be gathered  regarding the construction history of the monument.