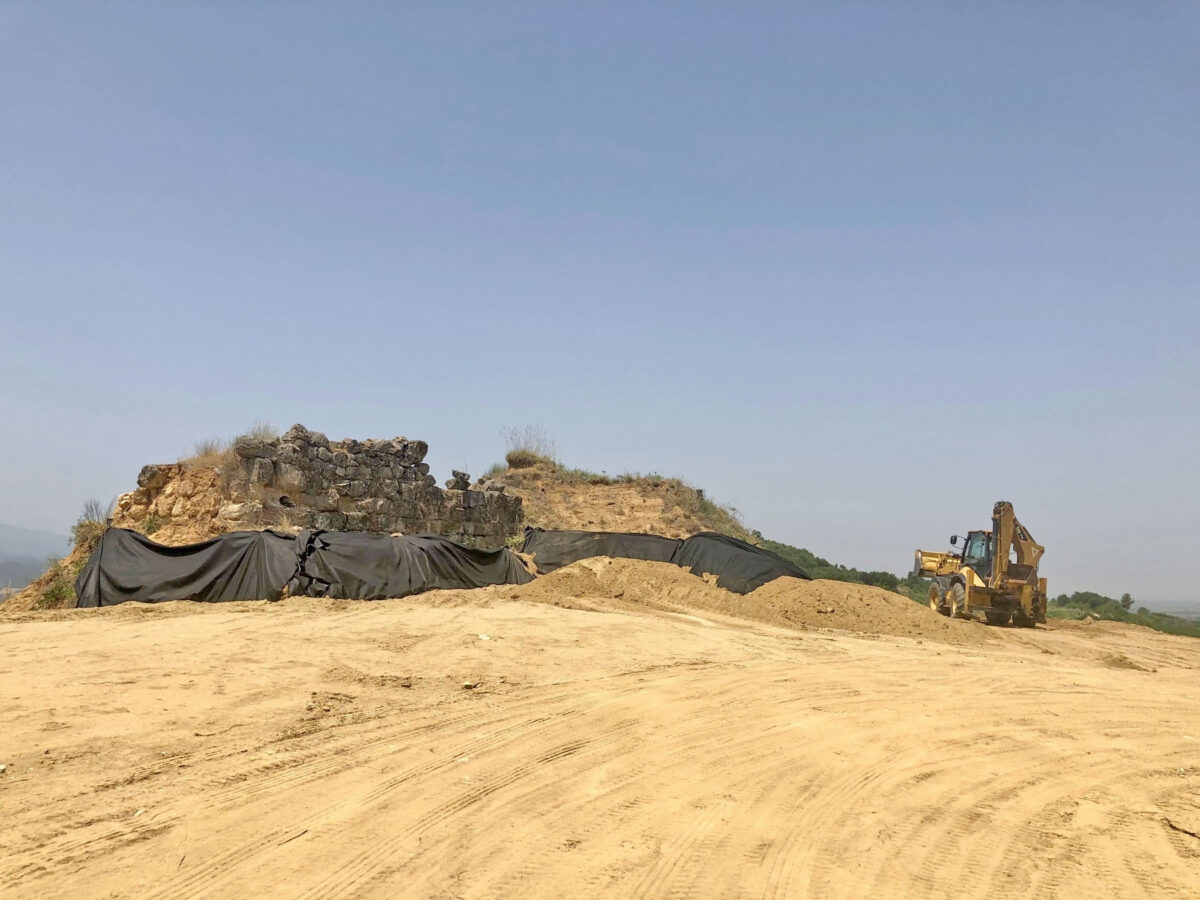 Burial monument of Amphipolis ready to be visited by 2022

Inspection at the Kasta Tomb

Last Friday, Minister of Culture and Sports Lina Mendoni inspected the works being carried out at the Kasta Tomb in Amphipolis. The Minister was informed about the ongoing earthworks for the restoration of the appearance and shape of the Tomb – an extremely important technical project of antiquity ‒ which is expected to be completed in September. Geotechnical works are to start immediately, which involve constructing metal boxes with lightweight materials to create retaining walls.

This work is estimated to be completed in November, so that the stabilizing and restoration of the burial monument can begin. Lina Mendoni requested a detailed timetable from the services of the Ministry of Culture regarding the work programme until the summer of 2022, when the monument can be visited by special groups of the public. The timetable was asked to include the archaeological excavation of the four-sided building at the top of the Tomb, which has now been proved as being the base of a large mound.

With the completion of the expropriation process, the scholarly restoration of the enclosure begins. The Minister also requested from the Serres Ephorate of Antiquities a detailed planning of both the archaeological excavations on the adjacent Hill 133 and the search for the remains of the ancient Egnatia Road situated between the Kasta Tomb and Hill 133.

As Lina Mendoni said: “Obviously there were delays in realizing the project mainly due to the pandemic. But today it is on the right track. It is important that the inspection we conducted with Deputy Regional Governor Panagiotis Spyropoulos, the Secretary General of the Ministry and its staff showed that work on the Tomb is progressing with an updated timetable, which makes us confident we can overcome the delays. At the moment, earthworks are being carried out, to be followed by geotechnical works and immediately after the stabilizing and restoration of the burial monument.

“During the pandemic, a series of studies were prepared that were due from the period 2015-2019. A series of architectural studies is expected to be submitted by August to the Central Archaeological Council for approval. The Directorate for the Preservation of Ancient and Modern Monuments of the Ministry of Culture has developed and implemented a pioneering research programme with the purchase of very specific equipment, to address all issues related to colour and painted images found both on marble members that today are located in the Museum and on the monument itself.

“We had said that special groups of the public will be able to visit the monument at the end of 2021 or the beginning of 2022. This has been postponed for about six months, more time being needed for this monument to be handed over to the general public. Let me remind you of the time that elapsed between the discovery of the tombs in Vergina and their becoming open to visitors.

“The Ministry of Culture’s services have supported this specific project from the start and will fulfill its commitments to the Region of Central Macedonia and especially to its citizens who are interested in the monument, as foreseen in the original schedule, ie by the end of the specific funding period, ie up the end of December 2023”.

The Minister of Culture was accompanied on the inspection by Deputy Regional Governor of Serres Panagiotis Spyropoulos, Deputy Regional Minister of Culture Katerina Peristeri, Secretary General of Culture George Didaskalou, Director of Prehistoric and Classical Antiquities Elena Koundouri, Director of Restoration of Ancient Monuments Demosthenes Svolopoulos, Head of Works of the Ephorate of the City of Athens Antiquities Michalis Lefantzis, Head of the Serres Ephorate of Antiquities Dimitria Malamidou and staff of the Ministry of Culture.