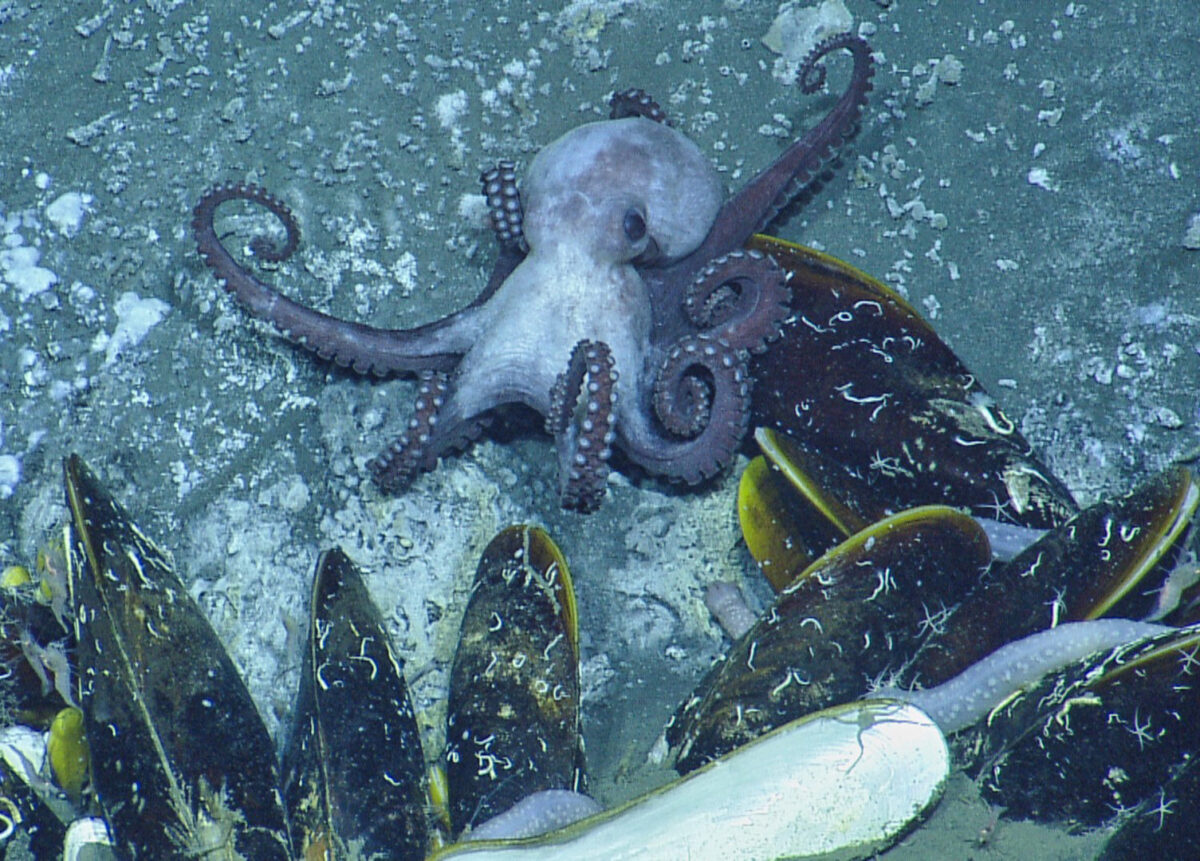 Evidence of predation by octopuses pushed back by 25 million years

Paper published in Biological Journal of the Linnean Society

New research unveiled the earliest evidence of octopus predation in the fossil record. The evidence consists of tiny holes drilled in the clams they preyed upon during the Cretaceous period about 75 million years ago.

Octopuses from the Octopodoidea superfamily are a versatile group of marine predators comprising more than 200 species today. As these soft-bodied cephalopods do not fossilize easily because they decay rapidly, only a single body fossil species from 95 million-year-old Cretaceous rocks in Lebanon is known.

Unlike other modern cephalopods, octopodoids leave behind tiny oval-shaped drill holes in many shells of their molluscan and crustacean prey. These octopuses then inject a venom through the hole that paralyzes and relaxes the prey’s muscles to facilitate consumption.

“These holes provide a great opportunity to track their presence and behavior in deep time, even though their body fossils are absent,” Klompmaker said.

Such holes have been documented from the fossil record up to 50 million years ago until now.

The team’s findings document the oldest recognized drill holes made by octopodoids, found in nearly 75 million-year-old bivalve shells from the Cretaceous period in South Dakota. This shows the ability of these animals to drill their prey evolved early in the evolutionary history of Octopodoidea, a remarkable 25 million years earlier than was previously known.

Klompmaker discovered the drilled shells in the collection of the American Museum of Natural History in New York in October 2018.

“I could not believe what I saw initially, but after cleaning and studying the specimens carefully, later on, we became convinced that these holes are the oldest evidence of predation by octopuses,” Klompmaker said. “I was not specifically searching for holes made by octopuses, so it was a great surprise. This goes to show the importance of maintaining and exploring museum collections.”

The fossil bivalve specimens now stored in a museum were once living in a shallow ocean. Nearly 75 million years ago, a broad seaway covered much of North America, called the Western Interior Seaway. Most of the ocean bottom was featureless with occasional signs of life such as fish swimming by and occasional gigantic clams on the seafloor.

Even though octopuses are commonly seen in today’s cold seeps, evidence of the presence of Octopodoidea had never been found in fossil seeps. Klompmaker and Landman’s research thus adds a new predator to the ecosystem of ancient cold seeps.

The team’s findings also mean Octopodoidea contributed to the rise of shell-destroying predators during a revolution of predators and their prey in the Mesozoic era, 252 to 66 million years ago, called the Mesozoic Marine Revolution. During this time, predators such as marine reptiles, teleost fish, some sharks, and decapod crustaceans became more abundant and diverse, putting extra pressure on their prey. In response, prey such as gastropods and brachiopodsand ammonites fortified their shell.

Klompmaker and Landman argue more research can be done on drill holes made by Octopodoidea. Little is known about how common this type of predation was, where these octopuses lived through time, and how they behaved toward their prey.

To continue this line of research, Klompmaker worked with Alex Kittle, mollusks collection manager at the Delaware Museum of Natural History, on predation by octopuses on cowries living in Florida 2 to 3 million years ago. In another recently published paper in Palaeogeography, Palaeoclimatology, Palaeoecology, they found cowries are commonly drilled by octopuses and these predators aimed for the muscle.

“It is very possible that new evidence of predation by octopods can also be discovered in fossil shells from Alabama and other places in the world,” Klompmaker said.

This research was supported in part by an American Museum of Natural History Lerner-Gray grant to Klompmaker.