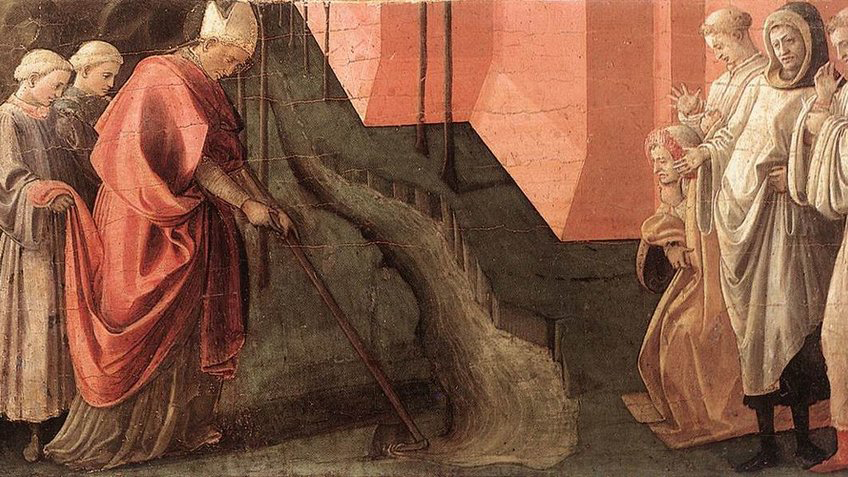 Increased Precipitation and the Watery Miracles of Italian Saints

An international, interdisciplinary team of authors analyse ancient texts and a stalagmite from a Tuscan cave and show that, in response to increased rainfall and flooding in the sixth century AD, a new type of miracle emerged in the stories of saints circulating in Italy at the end of antiquity: the power of the saints over the element of water on land and in the air.

Until now, historians have treated accounts of extreme weather events that might indicate climate change, or more specifically an increase in rainfall, with suspicion. Too many purely cultural factors, they argue, might have influenced one author or another to write about rains, droughts or floods. A new interdisciplinary study lead by researchers from the University of Pisa and the University of Warsaw, together with an international team of collaborators, links data indicating increased precipitation in northern and central Italy during the 6th century CE to historical accounts contained in contemporaneous texts about the lives and miracles of saints. The paper successfully integrates palaeoclimate proxies with historical records, demonstrating how interdisciplinary studies can provide a better understanding of climate impacts on past societies.

To obtain data about past climates, the researchers examined a stalagmite from Renella Cave in northern Tuscany. Layers of minerals deposited over the centuries provide a record of environmental conditions, much like tree rings, for scientists to analyze. Measuring the ratio of oxygen isotopes in successive layers of the stalagmite allowed the team to distinguished between wetter and drier periods, which they dated using uranium-thorium dating (a method similar to the more widely known radiocarbon method). On this basis, the researchers indicated that the 6th century CE in northern and central Italy was distinguished from others by an exceptional level of moisture.

A likely source of the moisture is a long-lasting negative phase of the North Atlantic Oscillation, a period of reduced atmospheric pressure that inundated northern and central Italy with moist air from the North Atlantic. Because water from the Atlantic has a higher concentration of lighter oxygen isotopes than the average precipitation in northern Italy, the negative North Atlantic Oscillations of the 6th century and associated rainfall in Italy left a telltale isotopic “trace” in the stalagmite layers of Renella Cave.

With the speleothem data in hand, the authors turned to the historical record. Using The Cult of Saints in Antiquity Database (http://csla.history.ox.ac.uk/), researchers accessed and analyzed more ancient and medieval texts than previously possible. This enabled them to compare sixth century Italian writings against the entirety of late antique and early medieval hagiographic texts (i.e., stories about saints) and identify their unique features.

Sixth-century accounts from the Apennine Peninsula, especially the Dialogues on the Miracles of the Italian Fathers attributed to Pope Gregory the Great, contain many descriptions of so-called water miracles, in which saints bring down or stop violent rains, storms and floods. In hagiographic literature from before and after this period, as well as in the writings of Gregory of Tours, a contemporaneous source that describes events in what is now France, stories of water miracles are almost absent. In the Dialogues they account for almost 20% of all references to miracles, which constitutes a unique feature.

Scholars interpret the sudden appearance of such accounts as proof of an exceptional interest in hydroclimatic events – which must have had a reason. This reason, according to the authors, was the climate change that occurred at the time and manifested itself in increased rainfall and floods.

“Literary sources, in particular stories about saints, should not be taken as a direct record of past events,” says Robert Wiśniewski, hagiography specialist and a co-author from the University of Warsaw. “They do, however, reflect the worldview of church writers and the basis for their interpretation of extraordinary weather phenomena.”

“In this study, geochemists, geologists, and climate specialists proved a climactic change that written sources only hinted at. In the sixth century, at least part of Italy really did become a land of torrential rains and floods,” adds Giovanni Zanchetta, professor of geology from the University of Pisa and the first author of the paper.

Above all, the presence of unusual hydrological and climatic events in the writings of sixth-century Italy indicates the role these events may have played in the socio-cultural changes that historians have long acknowledged. Such changes include the assumption local leadership by the bishops at the end of the sixth century and the development of the cult of saints, combined with a belief in their power over disease, people and nature in general.

“In addition to climate change, late Roman Italy also experienced numerous ‘barbarian’ invasions – but these difficult experiences did not lead the society of the time to collapse. On the contrary, it seems that climatic change actually contributed to strengthening its internal cohesion during a dramatic historical moment,” says Kevin Bloomfield, Roman historian and a co-author from Cornell University.

Scholars increasingly acknowledge that climatic phenomena are important factors in the speed and scale of social and cultural change. A “hybrid” approach to the study of climate impacts on past societies, based on both natural and historical data, makes it possible to avoid simplistic, and often catastrophic, interpretations of these impacts and better understand the actual experiences of societies at the time. “Our approach,” emphasizes Adam Izdebski, the corresponding author and the leader of the Palaeo-Science and History Independent Research Group at the Max Planck Institute for the Science of Human History, “shows how varied and unpredictable modern society’s responses to current climate change and other natural disasters can be.”