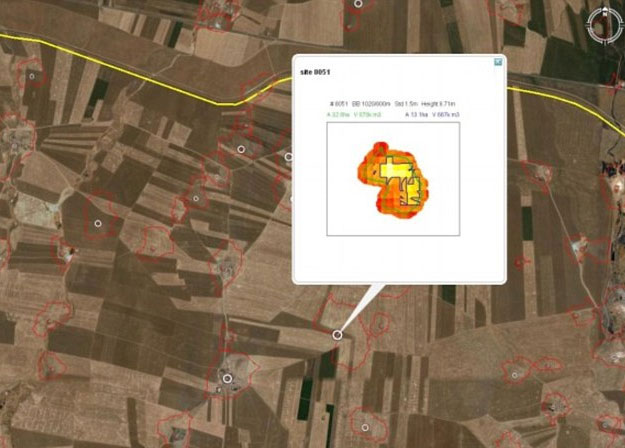 The landscapes of the Near East show both the first known settlements and the longest settlement systems known as Tell sites  – the result of continued building activity on the same spot for millennia.

However, this defining feature of ancient settlements has not received much attention, or even been the subject of systematic evaluation – until now. Researchers have found a way to give archaeologists a broader perspective of the ancient landscape by developing a system that identifies settlements based on a series of factors – including soil discolourations and the distinctive mounding that results from the collapse and rebuild of mud-brick settlements.

By combining spy-satellite photos obtained in the 1960s with modern multispectral images and digital maps of Earth’s surface, Jason Ur, the John L. Loeb Associate Professor of the Social Sciences and Bjoern Menze, a research affiliate in MIT’s Computer Science and Artificial Intelligence Laborator, created this new method for mapping large-scale patterns of human settlement by measuring the volume of settlement sites in a digital elevation model.

Using the computer software to analyse data, the results were stunning; mapping about 14,000 settlement sites—spanning eight millennia—at 15-m resolution in a 23,000-km2 area of northeastern Syria.

“I could do this on the ground,” Ur said, of the results of the computer-aided survey. “But it would probably take me the rest of my life to survey an area this size. With these computer science techniques, however, we can immediately come up with an enormous map which is methodologically very interesting, but which also shows the staggering amount of human occupation over the last 7,000 or 8,000 years.

“What’s more, anyone who comes back to this area for any future survey would already know where to go,” he continued. “There’s no need to do this sort of initial reconnaissance to find sites. This allows you to do targeted work, so it maximizes the time we have on the ground.”

Beyond the location of sites, they could examine continued occupation and find a dependency of the long-term benefit of a site based not only on local water availability, but also a strong relation to the basin-wide exchange network that  can infer from our record and third millennium B.C. routes that connect these sites that were still visible on the ground until recent times.

The team believe it will soon be possible to establish a near comprehensive map of human settlements in the fluvial plains of northern Mesopotamia and beyond. Site volume automatically recorded by computers using satellite and aerial imagery may be key to uncover long-term trends in human settlement activity.

The method has already renewed speculation about the importance of water to city development. Surprisingly, this study found that a handful of sites are unexpectedly large given that they are not located near rivers or in areas of high precipitation. “The settlement known as Tell Brak, for example, is far too large for what one would expect at such a marginal position,” says Ur  in an article in the journal Nature. “This is where things get interesting.”

Jennifer Pournelle, a landscape archaeologist at the University of South Carolina in Columbia, agrees. “These findings validate hypotheses I’ve introduced in southern Iraq — namely that irrigation is an after-effect of urbanization,” she says. “It’s not what enables a city to develop; it’s what keeps them going after soil moisture dries up.”