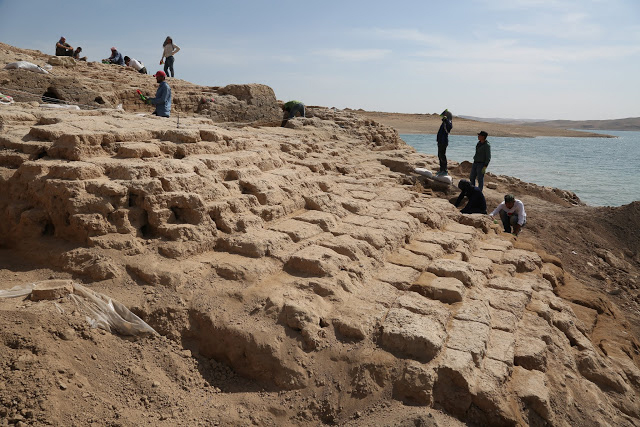 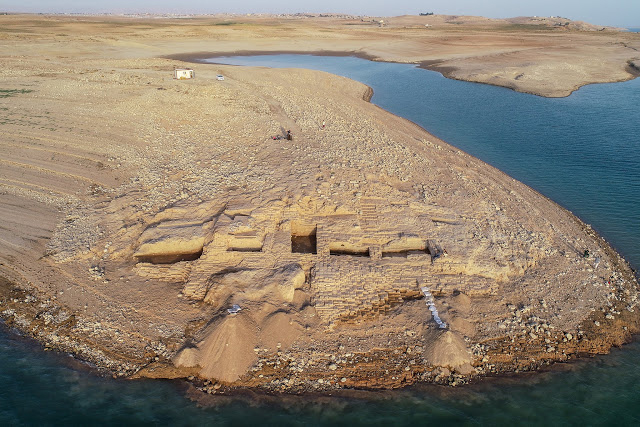 Preserved to a height of some seven meters

German and Kurdish archaeologists have uncovered a Bronze Age palace on the eastern bank of the Tigris River in the Kurdistan Region of Iraq. As the international research team reports, the site of Kemune can be dated to the time of the Mittani Empire, which dominated large parts of northern Mesopotamia and Syria from the 15th to the 14th century BCE. The Mittani Empire is one of the least researched kingdoms of the Ancient Near East. The archaeologists now hope to obtain new information about the politics, economy, and history of the empire by studying cuneiform tablets discovered in the palace.

Last autumn, receding waters in the Mosul Dam reservoir unexpectedly brought to light remains of an ancient city. Archaeologists launched a spontaneous rescue excavation of the ruins exposed by the ebbing waters. It was headed by Dr. Hasan Ahmed Qasim (Duhok) and Dr. Ivana Puljiz (Tübingen), as a joint project between the University of Tübingen and the Kurdistan Archaeology Organization (KAO) in cooperation with the Duhok Directorate of Antiquities. Kurdish archaeologist Hasan Ahmed Qasim explains its significance: “The find is one of the most important archaeological discoveries in the region in recent decades and illustrates the success of the Kurdish-German cooperation.” The project was largely financed by the KAO and its sponsor, Kurdisch businessman Hersh Isa Swar.

As Ivana Puljiz of the Tübingen Institute for Ancient Near Eastern Studies (IANES) reports, the site shows a carefully designed building with massive interior mud-brick walls up to two meters thick. She says some walls are more than two meters high and some of the rooms have plastered walls. “We have also found remains of wall paintings in bright shades of red and blue,” Puljiz says. “In the second millennium BCE, murals were probably a typical feature of palaces in the Ancient Near East, but we rarely find them preserved. So discovering wall paintings in Kemune is an archaeological sensation.”

The palace ruins are preserved to a height of some seven meters. Two phases of usage are clearly visible, Puljiz says, indicating that the building was in use for a very long time. Inside the palace, the team identified several rooms and partially excavated eight of them. In some areas, they found large fired bricks which were used as floor slabs. Ten Mittani cuneiform clay tablets were discovered and are currently being translated and studied by the philologist Dr. Betina Faist (University of Heidelberg). One of the tablets indicates that Kemune was most probably the ancient city of Zakhiku, which is mentioned in one Ancient Near Eastern source as early as the Middle Bronze Age (ca. 1800 BC). This indicates the city must have existed for at least 400 years. Future text finds will hopefully show whether this identification is correct.

In ancient times, the palace stood on an elevated terrace above the valley, only 20 meters from what was then the eastern bank of the Tigris River. In the Mittani period, a monumental terrace wall of mud-bricks was built against the palace’s western front to stabilize the sloping terrain. Overlooking the Tigris Valley, the palace must have been an impressive sight.

Archaeological surveys carried out by the Collaborative Research Center “Resource Cultures” (SFB 1070) under the direction of Dr. Paola Sconzo (University of Tübingen) in the vicinity of the palace indicate that a larger city adjoined it to the north. “We discovered the site of Kemune already in 2010 when the dam had low water levels; even at that time we found a Mittani cuneiform tablet and saw remains of wall paintings in red and blue,” says Hasan Ahmed Qasim, “But we couldn’t excavate here until now.” The area was flooded following the construction of the Mosul Dam in the mid-1980s. But a lack of rain and water released to ease dry conditions in southern Iraq meant that the water level dropped so far in the summer and autumn of last year that archaeologists could excavate the site for the first time.

“The Mittani Empire is one of the least researched empires of the Ancient Near East,” explains Puljiz. “Information on palaces of the Mittani Period is so far only available from Tell Brak in Syria and from the cities of Nuzi and Alalakh, both located on the periphery of the empire. Even the capital of the Mittani Empire has not been identified beyond doubt.” The discovery of a Mittani palace in Kemune is therefore of great importance for archaeology.

The Mittani Empire covered an area reaching from the eastern Mediterranean coast to the east of present-day northern Iraq from the 15th century to the middle of the 14th century BCE. Its heart was in what is now northeastern Syria, where its capital Washukanni was probably located. Akkadian cuneiform texts from the site of Tell el-Amarna in present-day Egypt show that the Mittani kings interacted as equals with the Egyptian pharaohs and the kings of Hatti and Babylonia.

For example, it is known that the Mittani king Tushratta gave his daughter’s hand in marriage to Pharaoh Amenophis III. Mittani lost its political significance around 1350 BCE. Its territories came under the control of the neighboring empires of the Hittites and Assyrians. The Mittani culture is known for its typical painted ceramics. The vessels are characterized by carefully-executed light painting on a dark background. Their conspicuous appearance enables archaeologists to date the sites where fragments of such vessels are found to the time of the Mittani Empire.