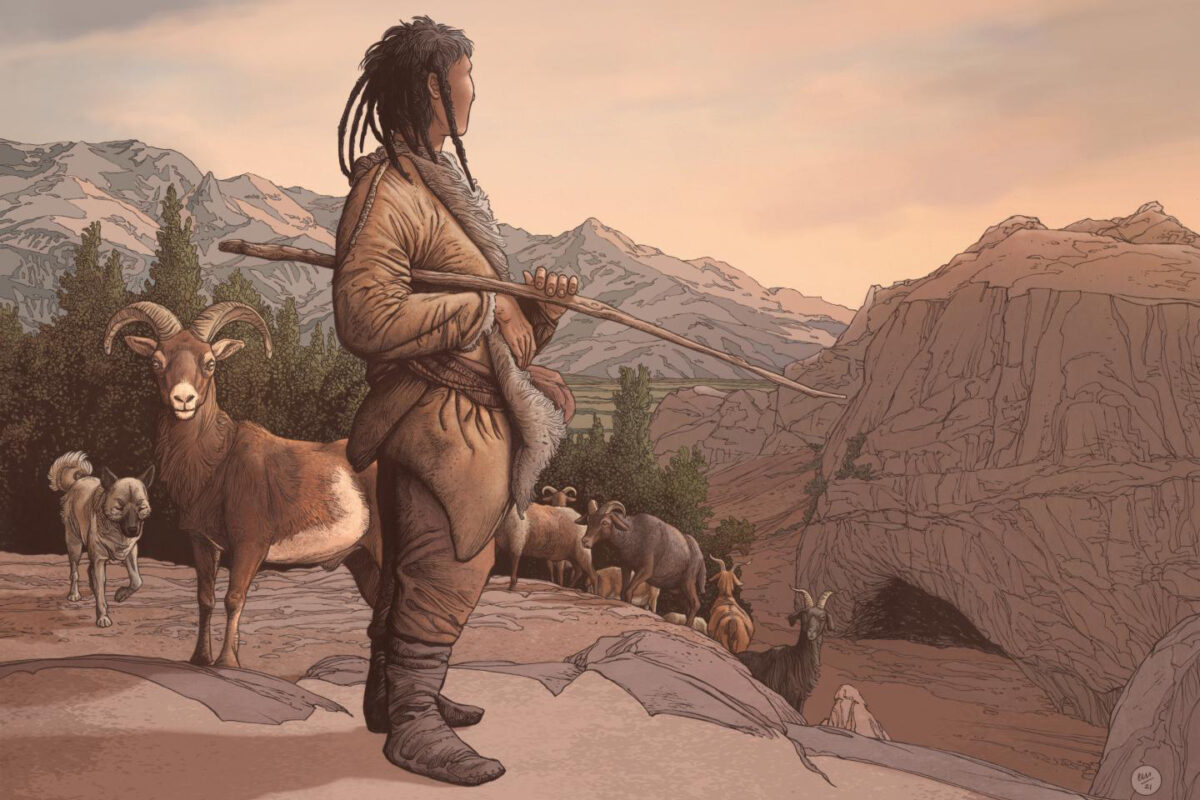 Along the Tian Shan and Alay mountain ranges of Central Asia, sheep and other domestic livestock form the core economy of contemporary life. Although it was here that the movements of their ancient predecessors helped to shape the great trade networks of the Silk Road, domestic animals were thought to have come relatively late to the region. A new study, published in the journal Nature: Human Behavior, reveals that the roots of animal domestication in Central Asia stretch back at least 8,000 years – making the region one of the oldest continuously inhabited pastoral landscapes in the world.

The domestication of sheep, goat, and cattle first took place in the Fertile Crescent of Mesopotamia and the nearby mountain zones of western Asia roughly 10,000 years ago, in lockstep with the first domestication of plant crops like wheat and barley. This innovation in human subsistence, known as the Neolithic Revolution, spread northwards to Europe and southwards to Africa and India, transforming human societies across three continents. But until recently, it seemed that this dramatic expansion of domestic plants and animals failed to reach eastward to the rich mountain zones of Central Asia, where—despite their outsized significance in the later millennia of the Bronze Age and beyond—there was little evidence of a Neolithic dispersal.

That changed when a joint team of international scientists, led by Dr. Svetlana Shnaider of Russia’s Institute of Archaeology and Ethnography (RAS-Siberia, Novosibirsk) and Dr. Aida Abdykanova of the American University of Central Asia (Kyrgyzstan), decided to revisit rockshelter Obishir V, tucked into a mountain precipice along Kyrgyzstan’s southern border with Uzbekistan. The site, which was first discovered and excavated by Soviet archaeologists in the 20th century, had yielded an unusual assemblage of stone tools, some of which seemed to have been used for processing grains. Furthermore, sprinkled throughout the layers of the site’s geologic strata were the fragmented remains of what appeared to be sheep and goats.

Could this be evidence of an ancient, undocumented Neolithic movement of domestic animals deep into the interior of Central Asia? To find out, Shnaider and Abykanova partnered with lead author Dr. William Taylor, a specialist in the study of animal domestication at the University of Colorado-Boulder’s Museum of Natural History and the Max Planck Institute for the Science of Human History, along with a team of international experts from across Europe and the United States. After radiocarbon dating bones and teeth from the site, it became clear that the oldest cultural layer dated at least as far back as ca. 6000 BCE, or more than 8,000 years ago — three millennia earlier than domestic animals were thought to have reached Central Asia.

Burning, cut marks, and other changes to the animal bones showed that they had been butchered, while patterns of microscopic seasonal layering within the animals’ tooth cementum indicated that they were slaughtered in the fall, as is common in many herding societies. But because the bones were highly fragmented, the species could not be identified using standard anatomical analysis. Instead, the researchers applied an interdisciplinary approach using both paleogenomics and collagen peptide fingerprinting to identify the animal remains. Comparing their results with the genomes of wild and domestic sheep species from across Eurasia, the researchers made a shocking discovery.

“With each new line of evidence, it became increasingly clear… these were not wild sheep — they were domestic animals,” says Taylor.

For those that have worked for years to understand Central Asia’s prehistory, the results are startling.

“This discovery just illustrates how many mysteries still remain regarding the prehistory of Inner Asia – the cultural crossroads of the ancient world,” says the Max Planck Institute’s Dr. Robert Spengler — a study co-author and author of Fruits from the Sands: The Silk Road origins of the foods we eat.

Future work will be necessary to understand the full impact of the study’s findings and their implications for the rest of ancient Eurasia. Shnaider plans to return to Obishir this coming summer to look for clues and to determine whether other domestic animals, like cattle, or domestic plants, such as wheat and barley, also spread to Kyrgyzstan from Mesopotamia in the deep past. With an award from the European Research Council, project partner and co-author Dr. Christina Warinner (Harvard/MPI-SHH) is spearheading an effort to investigate whether these first Central Asian sheep spread elsewhere in the region and whether they were used to produce dairy or wool.

“This work is just the beginning,” says Taylor. “By applying these interdisciplinary techniques from archaeological science, we are starting to unlock the clues to Central Asia’s past.”