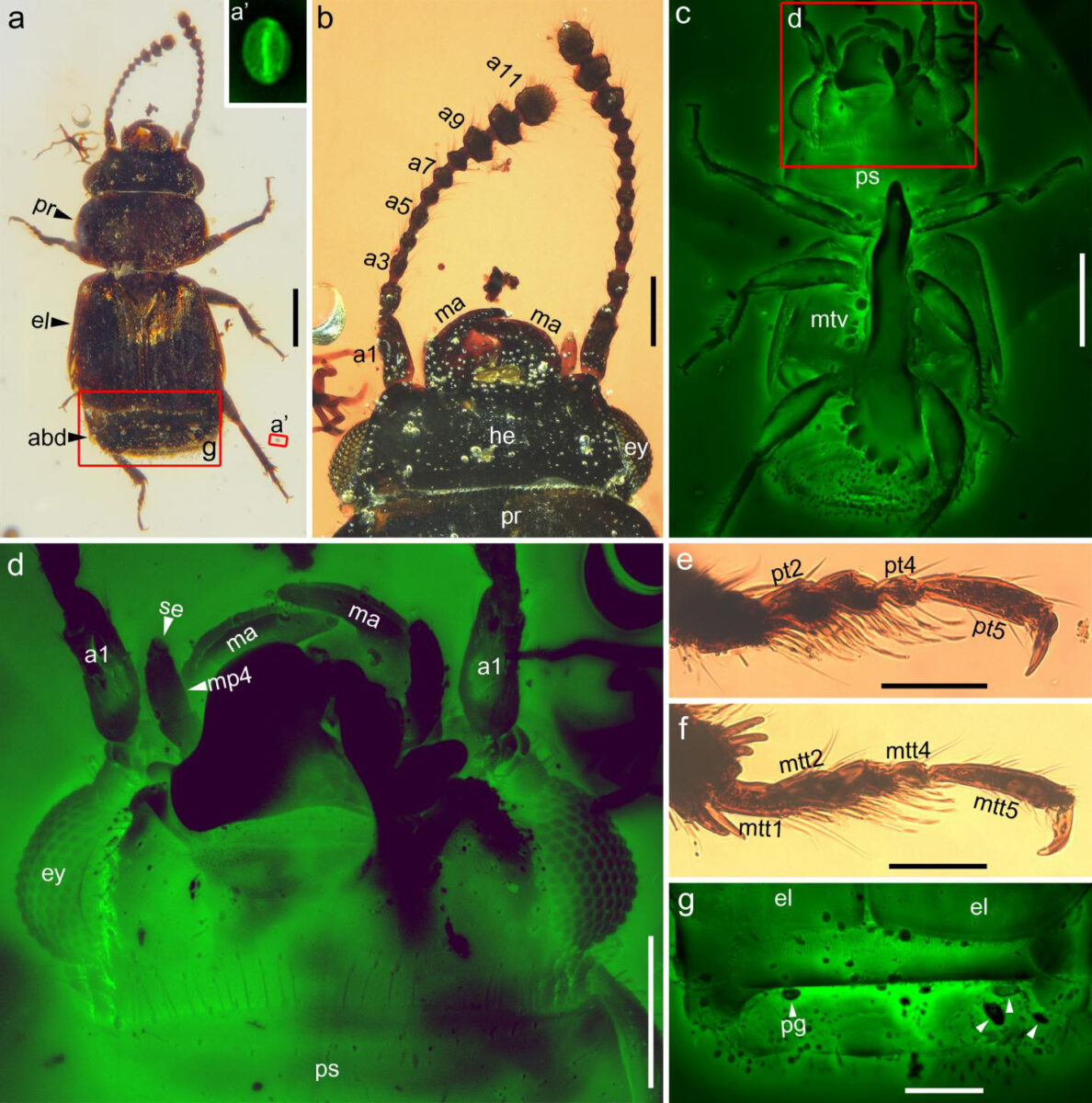 Scientists uncover the last meal of a Cretaceous pollinator

While pollinators such as bees and butterflies provide crucial ecosystem services today, little is known about the origin of the intimate association between flowering plants and insects.

Now, a new amber fossil unearthed by researchers from the Nanjing Institute of Geology and Palaeontology of the Chinese Academy of Sciences (NIGPAS) and the University of Bristol sheds light on some of the earliest pollinators of flowering plants.

The study was published in Nature Plants on April 12.

Two hundred million years ago the world was as green as today, overgrown with dense vegetation, but it was not as colorful. Flowering plants (angiosperms) that make up over 80% of all plant species today, only began to diversify in the Cretaceous, about 125 million years ago.

Some scientists have attributed the huge evolutionary success of angiosperms to their mutualistic relationships with insect pollinators, but fossil evidence of Cretaceous pollinators has so far been scarce.

In this study, the paleontologists describe a new fossil beetle species named Pelretes vivificus from mid-Cretaceous amber originating from northern Myanmar. The new species lived in the Burmese Cretaceous rainforest some 99 million years ago. Its closest relatives are short-winged flower beetles (Kateretidae) that today occur in Australia, visiting a diverse range of flowers and feeding on their pollen.

“Pelretes vivificus is associated with clusters of pollen grains, suggesting that short-winged flower beetles visited angiosperms in the Cretaceous. Some aspects of the beetle’s anatomy, such as its hairy abdomen, are also adaptations associated with pollination,” said Prof. CAI Chenyang, a paleontologist from NIGPAS.

The Hukawng Valley in northern Myanmar is one of the richest amber deposits known. “Besides the unparalleled abundance of fossil insects, the amber dates back to the mid-Cretaceous, right when angiosperms were taking off,” said Erik Tihelka, entomologist and paleontologist at the University of Bristol. Cretaceous amber fossils provide an important source of evidence for understanding the biology of early angiosperms.

While Pelretes is not the first pollinating beetle to be described from Cretaceous amber, this unique specimen preserves a bizarre clue about its diet. The fossil is associated with beetle coprolites – fossil fecal pellets – that provide a very unusual but important insight into the diet of short-winged flower beetles in the Cretaceous.

The fossil fecal pellets are completely composed of pollen, the same type that is found in clusters surrounding the beetle and attached to its body, which suggest that Pelretes visited angiosperms to feed on their pollen. This finding provides a direct link between early flowering plants in the Cretaceous and their insect visitors; it shows that these insect fossils were not just incidentally co-preserved with pollen, but that there was a genuine biological association between the two.

“The pollen associated with the beetle can be assigned to the fossil genus Tricolpopollenites. This group is attributed to the eudicots, a living group of derived angiosperms, that includes the orders Malpighiales and Ericales,” said Dr. LI Liqin, fossil pollen specialist from NIGPAS.

“This shows that pollinators took advantage of early angiosperms soon after their initial diversification and visited a diverse range of groups by the mid-Cretaceous,” said Prof. CAI.