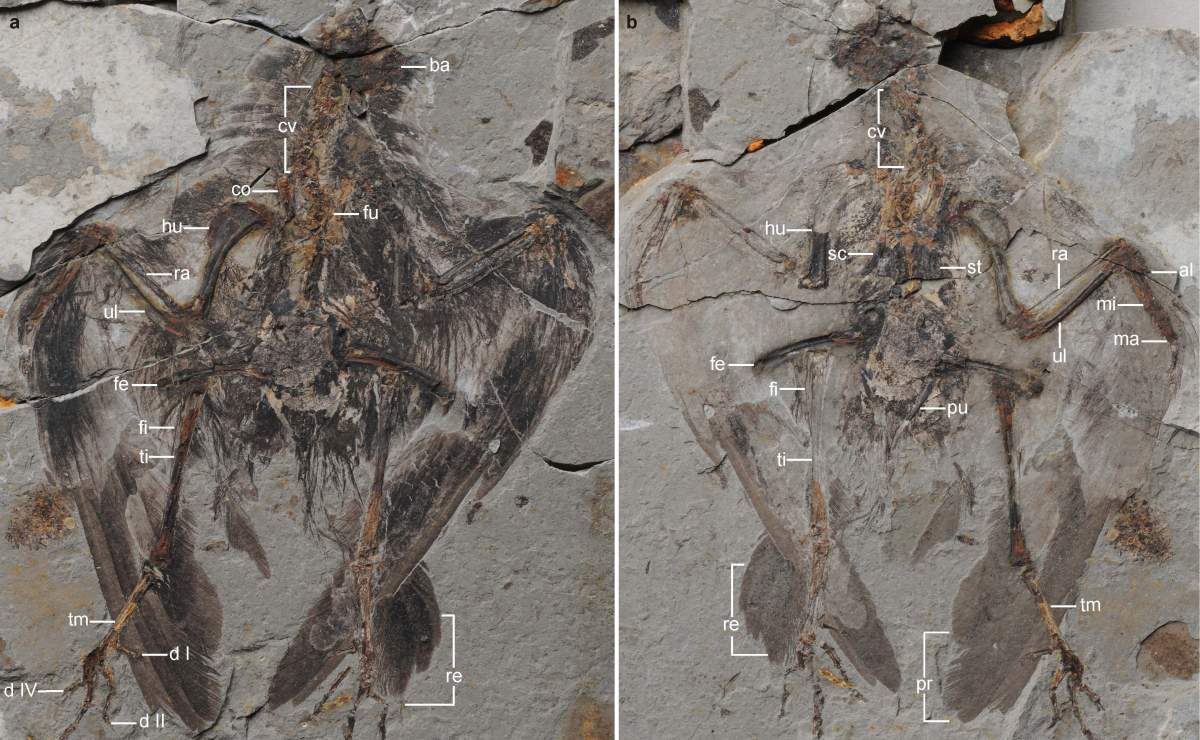 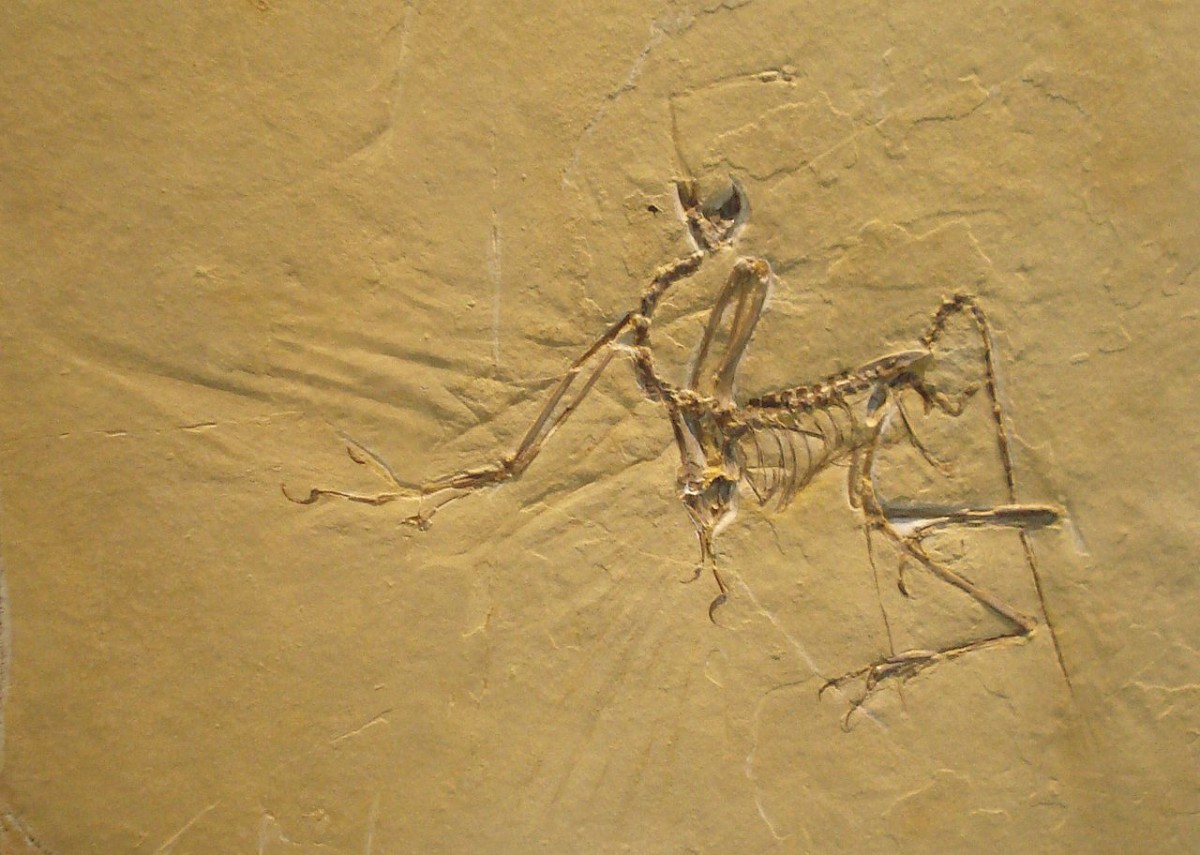 The Archaeornithura meemannae lived roughly 130.7 million years ago in northeast China, about 6 million years before the previously thought origin of modern birds, according to a paper published in Nature Communications.

Put yourself on the planet 130 million years ago. Most of the animals, from horned dinosaurs to swimming, predatory plesiosaurs, would be deeply alien, not to say terrifying. But rising from the wetlands and winging across the sky were birds startlingly like today’s. That’s the message from two bird skeletons—spectacularly preserved with feathers and all—reported last week.

The 130-million-year-old fossils of wading birds, found in northeast China by a team led by paleontologists Min Wang and Zhonghe Zhou of the Institute of Vertebrate Paleontology and Paleoanthropology in Beijing, push back the lineage that led to today’s birds by at least 5 million years and make it almost certain that the origin of the lineage was much older still. The fossils’ specialized anatomy suggests that key factors in birds’ long-term success, such as expert flying ability and rapid growth rates, arose surprisingly early in avian evolution.

“New bird fossils seem to come out every week now, and they are revolutionizing our understanding of bird evolution. But of all the new specimens, this is one of the most important found over the last decade,” says paleontologist Stephen Brusatte of the University of Edinburgh in the United Kingdom. Not only does the bird look nearly modern, but it was apparently a water dweller, showing that “ancient birds became specialized in their respective habits” very early, says paleontologist Luis Chiappe of the Natural History Museum of Los Angeles County in California.

Birds were born about 150 million years ago, when a group of small meat-eating dinosaurs spread their feathered wings and took to the skies. They soon split into two distinct groups: the lineage that led to modern birds, called the ornithuromorphs, and the so-called opposite birds, or enantiornithines, whose shoulder ball-and-socket joints connected in an inverse way from those of living birds. Relatively poor fliers, the opposite birds also typically had teeth and clawed wings. They thrived for millions of years, but vanished along with their dinosaur relatives in the mass extinction at the end of the Cretaceous.

Meanwhile, the lineage of modern birds evolved “huge chest muscles and wings comprised of many different types of feathers layered over each other”—features essential to high-powered flight, Brusatte explains. Their bone structure also suggests that they grew much faster than the opposite birds. But researchers did not know when those features emerged. Although they had found some excellent specimens of the earliest birds, such as Germany’s famed 150-million-year-old Archaeopteryx, as well as stunning later fossils from northeastern China, a 20-million-year gap remained between Archaeopteryx and other fossils, most of which were opposite birds, Chiappe says.

The new fossils fill the gap in time and also in anatomy. Writing in Nature Communications, the Beijing team describes two skeletons of a species they call Archaeornithura meemannae. (Archaeornithura means “ancient ornithuromorph,” andmeemannae is in honor of Chinese paleontologist Meemann Chang.) Each exquisitely preserved specimen has the telltale traits of a modern bird: fan-shaped tail feathers, highly fused bones at the ends of the wings, and the U-shaped wishbone familiar to anyone who has carved a roast chicken. The fossils even have a small projection on the front edge of their wings—known to boost maneuverability during flight—that is remarkably similar to that of today’s birds.

Furthermore, Archaeornithura had long legs and feet apparently adapted to wading in water, similar to those of today’s plovers, suggesting that modern birds arose in aquatic habitats. Finding such a modern bird, already specialized for wading, suggests that millions of years of aquatic evolution took place even before A. meemannae came on the scene, Zhou explains. He suggests that while the opposite birds found safety in the trees, life in more open, aquatic spaces may have given the ornithuromorphs “more choices of high protein food” and favored their evolution into swift fliers so they could avoid the danger of predators. All this evolution must have happened after Archaeopteryx but before 130 million years ago.

The fossils reveal the origins of the features that, tens of millions of years later, may have allowed modern birds to survive the Cretaceous extinction when other birds did not, Zhou and Wang say. No one is sure just what conditions prevailed in the postasteroid apocalypse, but Wang speculates that the fast growth rates of modern birds, which let them reach adulthood faster and spend less time dependent on their parents, may have given them an advantage; likewise skilled flight may have been a boon.

But this idea is “too simplistic,” counters Sankar Chatterjee, a paleontologist at Texas Tech University in Lubbock, because many ornithuromorphs vanished during the extinction, too. Nevertheless, Brusatte argues, “from the ashes of that extinction, a few groups of more sophisticated birds, with better flight abilities and perhaps faster growth rates, were able to survive.” Those key traits, the new fossils show, arose near the dawn of bird evolution.