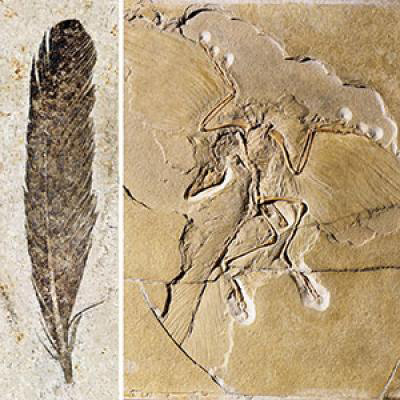 Reconstructing ancient life has long required a certain degree of imagination. This is especially true when considering the coloration of long-extinct organisms. However, new methods of investigation are being incorporated into paleontology that may shed light (and color) on fossils. Research presented at the recent Society of Vertebrate Paleontology meeting shows the importance of using new imaging technologies in reconstructing the color of Archaeopteryx, one of the most famous and important fossils species.

Ryan Carney of Brown University incorporated scanning electron microscopy in a 2012 study to identify melanosomes (melanin-containing pigment structures) in modern feathers to reconstruct the feather color of the iconic Archaeopteryx, the so-called “missing link” – or more appropriately, evolutionary intermediate – between non-avian dinosaurs and birds. Archaeopteryx has also been referred to as the “Mona Lisa of paleontology,” a fossil taxon with great scientific, historical, and cultural importance.

However, after Carney’s original publication, there has been some recent controversy with respect to two competing papers that offer alternative interpretations. The first was that the Archaeopteryx feather was both black and white, based on the distribution of organic sulfur imaged via synchrotron. The second was that the fossilized microbodies in the feather represent bacteria instead of melanosomes, given their similarities in size and shape.

The results of Carney’s new research address these alternative interpretations and provide new insights into the Archaeopteryx feather. “The inner vane of the Archaeopteryx feather, which they claimed was white, we instead found to be packed with black melanosomes,” said Carney. “This is critical because white feather color is only produced in the absence of melanosomes.”

Furthermore, Carney and his Swedish colleagues have investigated the preservation of melanosomes in a variety of other fossils, utilizing additional new analytical methods such as Time-of-Flight Secondary Ion Mass Spectrometry (ToF-SIMS). Carney added, “We are not contending that every fossilized microbody is a melanosome. However, this new chemical method has allowed us to detect actual melanin molecules, which are associated with the melanosome-like microbodies in fossilized feathers and skin, from both terrestrial and marine environments. This integrated structural and direct chemical evidence provides the definitive proof that melanosomes can indeed be preserved in the fossil record.”

Together, this new research paints the final picture of the famous wing feather as matte black with a darker tip, coloration that would have provided structural advantages to the plumage during this early evolutionary stage of dinosaur flight.

The application of such high-sensitivity analytical techniques is ushering in a new age of paleontological investigations. What once was artistic license, such as the appearance of ancient organisms, is now revealing itself in living color. As analytical methods in paleontology keep a pulse on technological advancements, we will continue to gain understanding of how fossil animals once lived and looked.