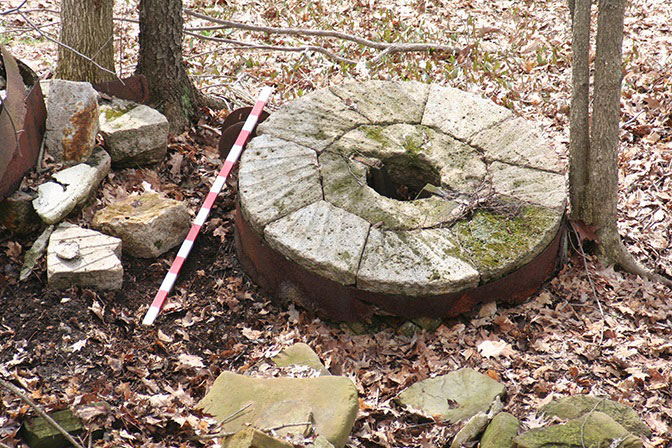 Grinding Away at History Using ‘Forensic’ Paleontology and Archaeology

Identifying the origins of the millstones commonly used in the 1800s

The Society for Sedimentary Geology (SEPM) announces an unusual paper in their journal PALAIOS that combines ‘forensic’ paleontology and archaeology to identify origins of the millstones commonly used in the 1800’s. While all millstones were used similarly, millstones quarried in France were more highly valued than similar stones quarried in Ohio, USA.

Over four years the scientific team located millstones by visiting historical localities in Ohio, then studied them and identified unique characteristics between the coveted French buhr and the locally sourced Ohio buhrstone. Both types of millstones were composed out of an extremely hard rock called chert, and superficially they can look very similar. With close examination, the scientists confirmed that the French buhr contained fossils that came from a freshwater environment, including algae and snail fossils and the Ohio buhrstone was quarried from a much older rock unit. The Ohio rock unit, likely laid down in a Paleozoic marine environment, was filled with invertebrate fossils known as fusulinids, pelmatazoans and brachiopods.

One of the key features useful to millers was the porosity of the rock; where fossils left empty cavities. In 1795 famous inventor and millwright, Oliver Evans, exclaimed that pores, “larger in diameter than the length of a grain of wheat” were not desirable. Based on the fossil assemblages the authors suspect the fossil assemblages from the Ohio buhrstone may have made these millstones less effective for milling, but that this claim would require further investigation.

Chert has been used for tool making throughout human history and it is the hope of the authors that these non-destructive techniques can be used to study the origins of other artifacts.