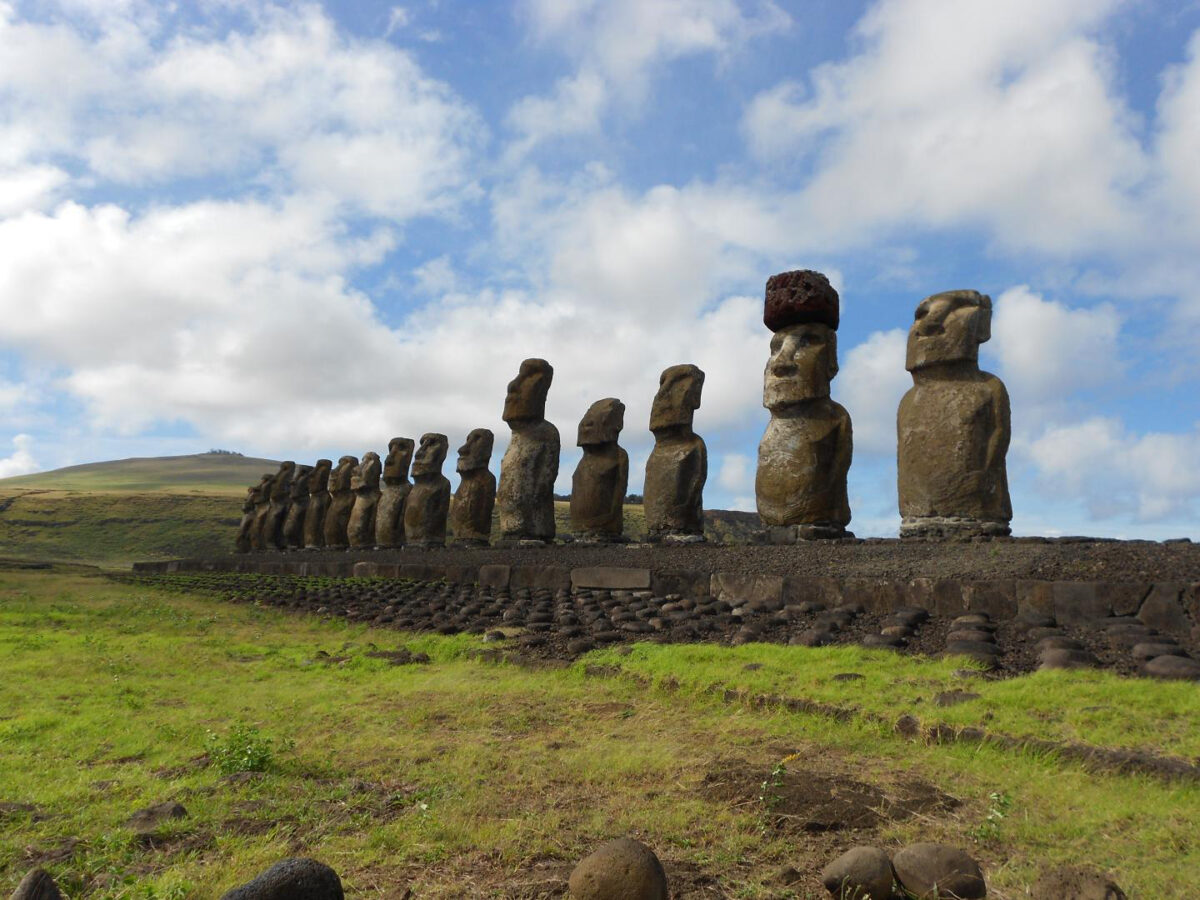 After a long journey, a group of settlers sets foot on an otherwise empty land. A vast expanse separates them from other human beings, cutting off any possibility of outside contact. Their choices will make the difference between survival and death.

The people of Easter Island may have something to teach future Martian colonists.

Binghamton University anthropologists Carl Lipo and Robert DiNapoli explore how complex community patterns in Rapa Nui — the indigenous name for both the island and its people — helped the isolated island survive from its settlement in the 12th to 13th century until European contact.

Their findings, “Population structure drives cultural diversity in finite populations: A hypothesis for localized community patterns on Rapa Nui (Easter Island, Chile),” were recently published in the scientific journal PLOS ONE. Co-authors also include Mark Madsen from the University of Washington’s Department of Anthropology and Terry Hunt from the University of Arizona’s Honors College and School of Anthropology.

“The cool thing about Easter Island is that it’s a great case study for what happens in absolute isolation,” said Lipo, a professor of anthropology and environmental studies and associate dean of Harpur College. “From our best understanding, once people got to the island, that was it. They weren’t going anywhere else and there wasn’t anyone else coming in.”

Shaped like a triangle, Easter Island is small: around 15 miles long and a bit more than 7 miles wide at its thickest point. It’s also one of the most remote inhabited places on Earth, more than a thousand miles away from the closest inhabited neighbors.

But for all its small size, Rapa Nui had multiple clans and small communities that maintained both cultural and physical separation. The archaeological evidence shows stylistic differences in the creation of artifacts in communities only 500 meters apart, for example. The inhabitants’ physical remains also show they didn’t stray far or marry away from home; this was uncovered through DNA and isotope analyses, as well as skeletal variations between communities.

These small communities may have been a cultural bulwark against a phenomenon known as random drift, according to their research.

The challenges of isolation

An idea that originates in genetics, random drift explores the appearance of traits in a population over time and how these traits can shift. This applies to cultural traits too, from specific words and customs to ways of making pottery.

Some traits are passed on to future generations; others aren’t and subsequently vanish. New traits, practices or fashions emerge — pottery decoration, ways of making arrowheads, clothing styles or slang — and either persist or fade in their time, as well.

“These things are potentially changing over time because of differences in how people are copying each other,” said DiNapoli, a postdoctoral research associate in anthropology.

While changes in aesthetics might not have a significant impact on a culture’s viability, other changes might. If a population is small and isolated enough, important technologies and survival strategies could become irrevocably lost.

“Let’s say my dad died before he was able to teach me some important technology and he’s the only person who knew how to do it,” DiNapoli said. “That can have a negative impact in a small, isolated population, where they never will interact with another group of people who might give them those ideas back again.”

Researchers believe that’s what happened in Tasmania, where the indigenous people lost practices such as fishing practiced by neighboring populations on mainland Australia. While these lost technologies could have proved beneficial to survival, they disappeared because there weren’t enough people to pass them on and no contact with outsiders who might have reintroduced these ideas, experts believe.

There is evidence that isolation may have led to the disappearance of populations on the so-called “mystery islands” of the Pacific Ocean. The archaeological records show that previous inhabitants either abandoned these islands or otherwise went extinct right around the time that interaction with other islands dropped off.

“One hypothesis is that as those places are becoming really isolated, then it becomes too difficult to live there, for whatever reason,” Lipo explained.

In recent years, researchers have constructed different kinds of models to show what factors drive changes in the diversity of cultural traits over time, DiNapoli explained. One major factor is demographics: the number of people in the population exchanging ideas with one another. But the structure of that population is also important.

While it may seem counterintuitive, large populations where everyone interacts with one another can experience stronger cultural drift, DiNapoli said.

“Whereas if you have lots of different small subpopulations, you end up keeping more diversity, because it’s sequestered in these different subgroups,” he said.

Traditional populations tend to be extremely conservative and avoid change unless there’s a good reason for it. After all, making the wrong decisions can have dire consequences.

“You really want to hold onto something that works,” Lipo said. “If you decided to take a risk, randomly plant crops somewhere else and it didn’t work out, it’s game over.”

Easter Island is often seen as a place where people made irrational decisions that led to their own demise, such as cutting down all the trees to build giant statues. That turns out not to be the case — and not just on the statue front.

At European contact, Rapa Nui had an estimated total population of 3,000 to 4,000 individuals, divided into an unknown number of clans and communities. Most of these communities were probably the size of large families — perhaps several dozen individuals, living in a space that spans several hundred meters.

Using computer modeling, Lipo and DiNapoli explored the impact of the island’s distinctive spatial patterns on the retention of cultural information. In their model, they located communities around ahu, or large platforms that were a center of ceremonial activities. They then configured ways these communities might potentially interact, and what affect these interactions would have on the persistence of diverse cultural traits.

What they discovered is that the greater the number of subgroups with limited interaction, the more likely a population is to retain potentially beneficial cultural information — even when the total population is quite small.

“Based on simulation modeling, it seems that population structure is super important for driving and retaining changes in cultural diversity,” DiNapoli said. “This could potentially be a really important factor for change in human history in general.”

After European contact, disease scythed through the Rapa Nui people, who were also stolen away as slaves. By 1877, the island’s population plummeted to just 111 individuals.

As a result, much of the Rapa Nui’s cultural knowledge was lost, including the ability to interpret rongorongo, a system of glyphs that may have recorded information. But other traditions survive, including songs, dances, a cat’s cradle-type of string art used in oral storytelling — and the Rapa Nui language itself, which is still spoken by the islanders today.

“Certainly a lot was lost, but they had these mechanisms for valuing oral traditions and being able to pass those on,” Lipo said. “It’s an amazing survival despite incredible odds. So much has been written about the negative side, and I think we haven’t yet begun to appreciate the ingenuity of the people there.”

Imagine another intrepid group of explorers, heading out in their ships to a new colony — 60 million miles away from Earth. On Mars, these future colonists would be profoundly isolated. They would have to solve their own problems and ensure their own survival, including the preservation of necessary knowledge and technologies.

“They become this isolated Easter Island in the middle of space,” Lipo said. “What spatial structure on Mars would you need to maintain the information maximally in that community?”

The lessons of Easter Island may help them survive.