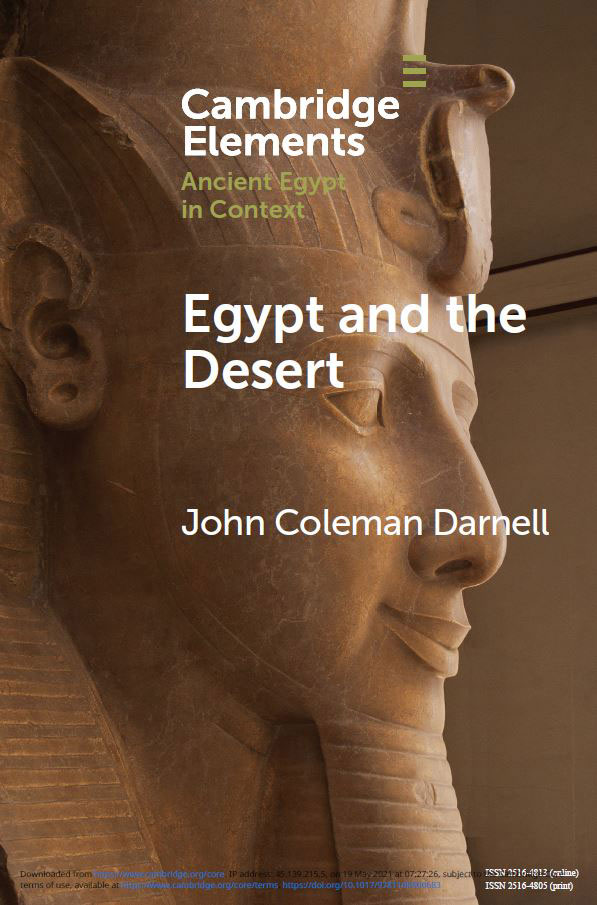 Egypt and the Desert

Egypt and the Desert by John Coleman Darnell (Yale University), focuses on the interdependent relationship between the people of the Nile Valley and the deserts surrounding it.

Deserts, the Red Land, bracket the narrow strip of alluvial Black Land that borders the Nile. Networks of desert roads ascended to the high desert from the Nile Valley, providing access to the mineral wealth and Red Sea ports of the Eastern Desert, the oasis depressions, and trade networks of the Western Desert. A historical perspective from the Predynastic through the Roman Periods highlights how developments in the Nile Valley altered the Egyptian administration and exploitation of the deserts. For the ancient Egyptians, the deserts were a living landscape, and at numerous points along the desert roads, the ancient Egyptians employed rock art and rock inscriptions to create and mark places. Such sites provide considerable evidence for the origin of writing in northeast Africa, the religious significance of the desert and expressions of personal piety, and the development of the early alphabet.

The book is the third volume of the new series Ancient Egypt in Context, published by the Cambridge
University Press within the frame of Cambridge Elements. The series, is edited by Gianluca Miniaci (Università di Pisa), Juan Carlos Moreno Garcia (CNRS–Paris), Anna Stevens (University of Monash/University of Cambridge).