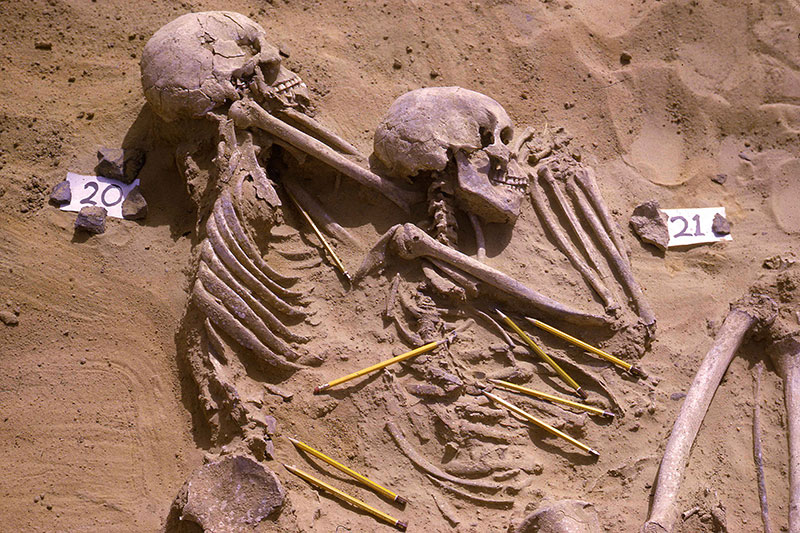 Jebel Sahaba: A succession of violence rather than a prehistoric war

The bones of 61 individuals were re-examined

Since its discovery in the 1960s, the Jebel Sahaba cemetery (Nile Valley, Sudan), 13 millennia old, was considered to be one of the oldest testimonies to prehistoric warfare. However, scientists from the CNRS and the University of Toulouse — Jean Jaurès (1) have re-analysed the bones preserved in the British Museum (London) and re-evaluated their archaeological context. The results, published in Scientific Reports on May 27, 2021, show that it was not a single armed conflict but rather a succession of violent episodes, probably exacerbated by climate change.

Many individuals buried at Jebel Sahaba bear injuries, half ot them caused by projectiles, the points of which were found in the bones or the fill where the body was located. The interpretation as evidence of mass death due to a single armed conflict, however, remained debated until a team of anthropologists, prehistorians and geochemists undertook a new study of the thousands of bones, about a hundred associated lithic pieces and the entire burial complex (now submerged by Lake Aswan) from 2013 to 2019.

The bones of 61 individuals were re-examined, including microscopic analysis, in order to distinguish traces of injury from damage produced after burial. About a hundred new lesions, both healed and unhealed, were identified, some with previously unrecognised lithic flakes still embedded in the bones. In addition to the 20 individuals already identified, 21 other skeletons have lesions, almost all suggestive of interpersonal violence, such as traces of projectile impact or fractures. In addition, 16 individuals have both healed and unhealed injuries, suggesting repeated episodes of violence over the course of a person’s life rather than a single conflict. This hypothesis is supported by the fact that some skeletons appear to have been disturbed by later burials. Surprisingly, men, women and children seem to have been treated indiscriminately in terms of the number and type of injuries or the projectiles direction (2).

These new data also reveal that the majority of lesions were produced by composite projectiles, throwing weapons (arrows or spears) composed of several sharp lithic pieces, some of which are laterally embedded. The presence of variously sharpened points, with variations in the orientation of the cutting edge, suggests that the intended purpose was to lacerate and bleed the victim.

These new results reject the hypothesis of a disaster cemetery linked to a single war. Instead, this site indicates a succession of limited raids or ambushes against these hunter-fisher-gatherers, at a time of major climatic variations (end of the last ice age and beginning of the African humid period). The concentration of archaeological sites of different cultures in such a limited area of the Nile Valley at this time suggests that this region must have been a refuge area for human populations subject to these climatic fluctuations. Competition for resources is therefore probably one of the causes of the conflicts witnessed in the Jebel Sahaba cemetery. This analysis, which changes the history of violence in prehistory, invites us to reconsider other sites from the same period.