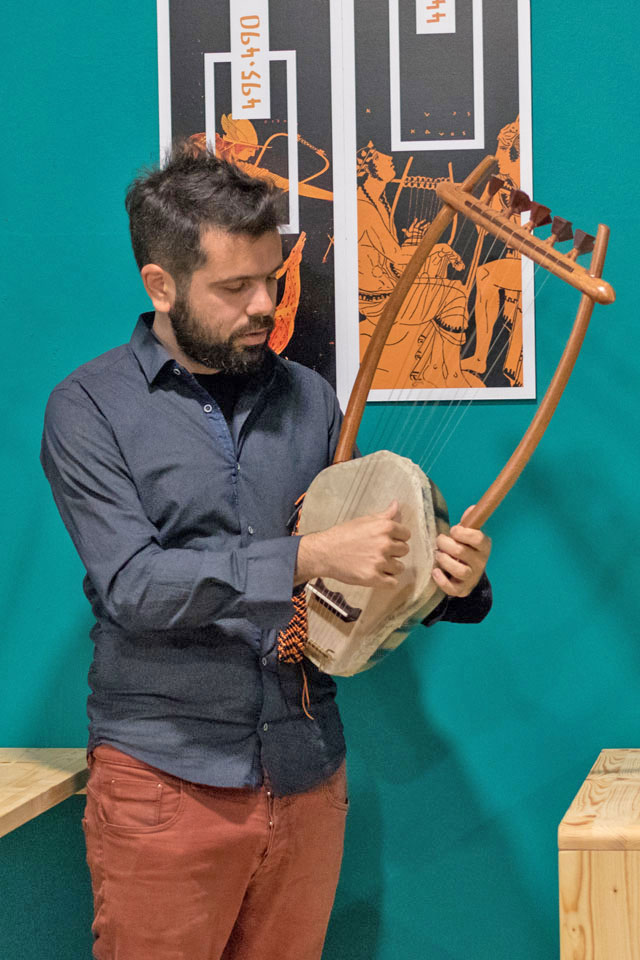 About six years ago, Theodoros Koumartzis, a graduate of Information Technology, first held an ancient lyre in his hands and it immediately became the starting point of a long journey using his love for this particular musical instrument as a “compass” to make ancient Greek culture known throughout the world.

For this reason, Mr. Koumartzis has traveled to Europe, America, Japan and even Tanzania to promote the ancient lyre, with which he plays all kinds of music from classical and modern sounds to music for video games!

“When one has studied this instrument, having loved it first, one can do a lot with music and in  a lot of ways it excels compared to many modern musical instruments”, says the musician from Thessaloniki talking on the “Praktoreio 104, 9 FM” radio station of the Athens and Macedonia News Agency, noting that it is not a difficult instrument to learn and can satisfy almost all musical tastes.

“Actually when I say that the ancient lyre has been heard in movie soundtracks and video games, it sounds a bit strange to most, but it is true. Recently I participated with my ancient lyre in the”raji” video game. It is a game set in ancient India and in addition to the sitar (ancient Indian musical instrument) the ancient lyre is also heard. Our own musician and composer Linos Tzelos did the sound design and the music composition and the lyre accompanies many of the adventures of the young woman protagonist on the screen who tries to save the earth from the demons”, says the 32-year-old musician.

Theodoros Koumartzis grew up in a family not only of artists but with the ancient lyre taking centre stage. His older brother Jordan is a professional musician, a music teacher for children and a co founder of the Aperito band. Nikos has undertaken the research and organizing the reconstruction of ancient musical instruments, as well as developing the branding of this new project in Greece and abroad. The father of the three brothers has maintained a workshop in Europos, Kilkis for thirteen years and is one of the few manufacturers of ancient lyres, which he sells abroad, mainly to America, Japan but also to several European countries.

“We make the ancient lyres almost the same as the ones we have seen on vases and statues. We are collaborating with the Aristotle University of Thessaloniki to use studies that have been done on the musical instrument of Hermes which he gave to Apollo. Global interest in this is huge and it is chosen by music therapists for their sessions as well as by school teachers in their classrooms”.

Mr. Koumartzis, his brothers and their father have created a special multi space of culture and music in Thessaloniki which they have named SEIKILO, after the Epitaph of Seikilos, the oldest complete melody composed by humanbeings surviving today. It hosts a permanent exhibition of Greek musical instruments, from antiquity to the present day. Mainly, however, it is a meeting place for musicians and family friends, where many collaborations were born and are being born with the sole aim of producing culture.

The harpist from Thessaloniki has recently been preparing to release his first complete album with Cypriot composer Evagoras Bekiaris. It will include collaborations with international participants from several countries and in it the ancient lyre will “encounter” other ancient musical instruments from different countries so as to “transport” the lovers of traditional music to other sounds.