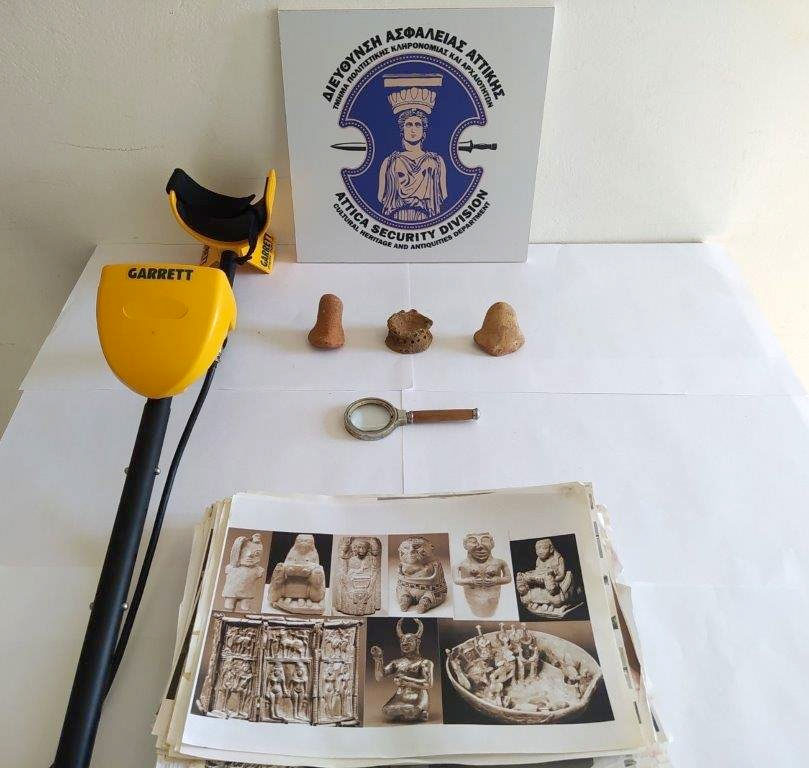 Arrest of 59-year-old man in possession of ancient artefacts

As part of inquiries on an individual in search of antiquities by using a metal detector and in illegal possession of ancient movable monuments, a squad of police officers of the above Service went to this district of Laconia, located the 59-year-old and searched his home and vehicles.

The following items were found and confiscated:

-The low conical foot of a vase from prehistoric times (the 2nd millennium B.C.), decorated with 16 non-pierced holes and a diameter of 5.5 cm, an excellent example of the Middle Helladic or Late Bronze Age.

–Part of a 6 cm high storage vessel’s body and stump of handle, made of reddish clay bearing marine sediments, from Hellenistic or Roman times.

– Part of the foot of a 6 cm utility vessel, made of reddish clay, with marine deposits and sediments, from Hellenistic or Roman times.

The archaeological value of the above movable monuments was documented by the Directorate of Documentation and Protection of Cultural Property of the Ministry of Culture and Sports, as well as by the Laconia Ephorate of Antiquities.

The pre-investigation revealed that the 59-year-old was regularly conducting illegal archaeological excavations, misappropriating antiquities belonging to different categories and periods which he failed to declare to the authorities.

The antiquities will be handed over for safekeeping and final evaluation to the Archaeological Museum of Sparta.