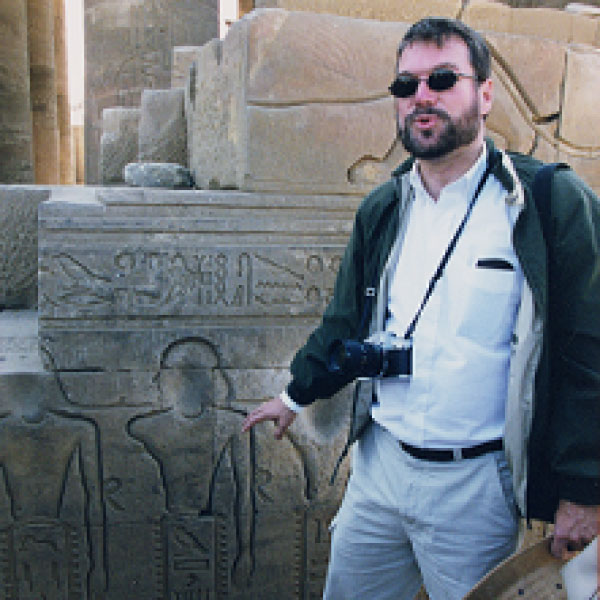 Foy Scalf (NELC PhD ’14), Research Associate, Head of Research Archives, and Head of the Integrated Database Project at the Oriental Institute has prepared this remembrance:

Robert held the Rowe Professorship of Egyptology at the Oriental Institute of the University of Chicago, where he received his PhD in 1987. He lived with a passion for his intellectual pursuits and considered himself an “Egyptophile” by the time he was in the second grade in Houston. He fueled his interests by repeated visits to the Egyptian revival architecture of Houston’s Metropolitan Theater. In high school, he was involved in theater and the debate team, skills which he honed to the benefit of his future career. After using the Houston Public Library to further his knowledge of ancient Egypt, Robert followed in the footsteps of his father by studying at Rice University, where he earned his BA with honors in 1975, majoring in psychology with an “unofficial” minor in Medieval studies. His unofficial minor led to Robert’s first publication in 1976 about the spread of Coptic Egyptian influence to Ireland. Robert remained a fiercely proud Texan and was a member of the Descendants of Austin’s Old 300 dedicated to the first settlers to receive land grants.

From Rice, Robert went on to study at the Oriental Institute of the University of Chicago in 1976, where he studied with Klaus Baer, Ed Wente, Janet Johnson, and George Hughes, receiving his PhD with honors in 1987. The revised version of his dissertation, published as The Mechanics of Ancient Egyptian Magical Practice in 1993, is one of the most influential volumes in the study of ancient Egyptian religion, magic, and culture, launching a renaissance in the field and remaining an Oriental Institute “bestseller” to this day. This book appeared while Robert served as the Marilyn M. Simpson Assistant Professor of Egyptology at Yale, from 1991–1996. He returned to the University of Chicago in 1996 and spent the rest of his academic career at the Oriental Institute where he became Associate Professor in 2001, Full Professor in 2004, and Rowe Professor of Egyptology in 2019. Receiving the inaugural Rowe Professorship at the Oriental Institute centennial gala was one of the proudest moments of Robert’s career. His many books, articles, classes, and lectures have left an indelible mark on Egyptology, his colleagues, and his countless students. Many future generations will continue to be influenced by his work.

Everyone who met Robert knew that his love of Egypt infused all areas of his life, from the name of his constant companion Sheshonq to his extensive collection of Egyptomaina objects and kitsch that decorated his home and office. He was a dazzling and entertaining public speaker, lecturer, and teacher. His students remember him as rigorous, but joyous, bringing a sense of fun and excitement to the academic journey. His wonderful sense of humor was on full display each Halloween as Robert and Sheshonq arrived at class dressed as mummies or pharaohs. Robert made many devoted friends in Egypt, Turkey, and wherever his work took him. He was embedded into the very fabric of the Oriental Institute, its Egyptology program, and the greater Chicago community. It is impossible to imagine them without him. He will be sorely missed and fondly remembered by all those who knew him.