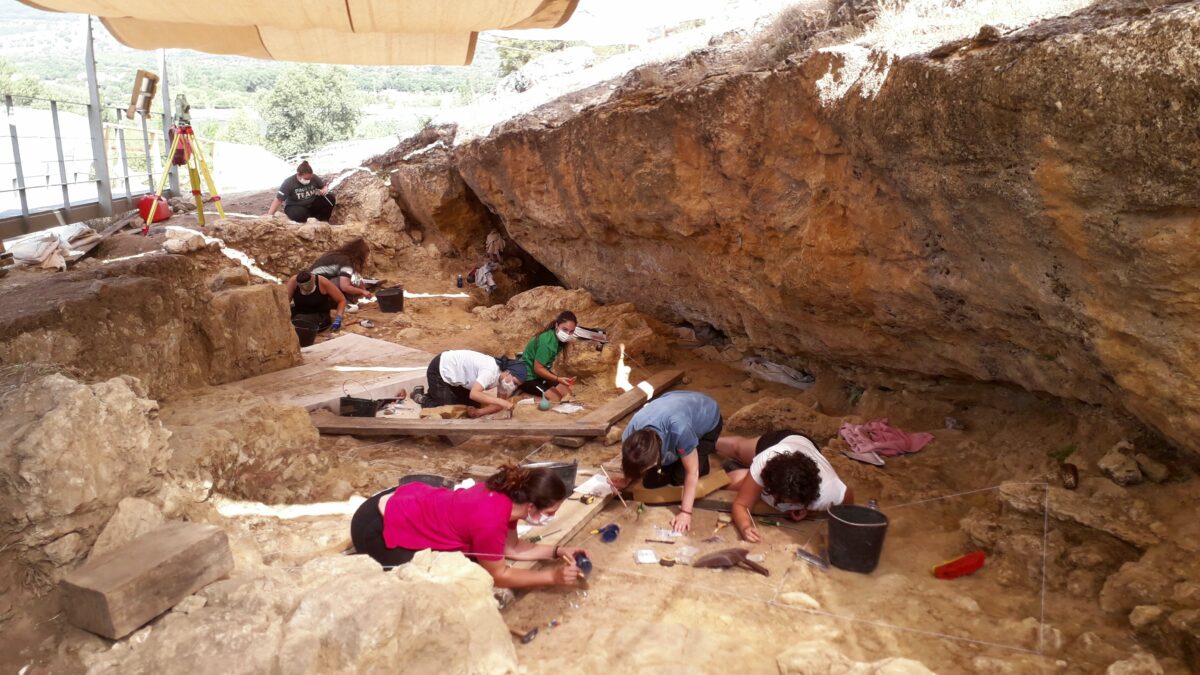 A Neanderthal hunting camp in the center of the Iberian Peninsula

A study led by CENIEH researcher has just been presented looking at the subsistence strategies of Neanderthal groups at the Navalmaíllo Rock Shelter site (Pinilla del Valle, Madrid), whose results indicate that they mainly hunted large bovids and cervids

Abel Moclán, a researcher at the Centro Nacional de Investigación sobre la Evolución Humana (CENIEH), is the lead author of a paper published in the journal Quaternary Science Reviews which undertook a zooarchaeological and taphonomic study of the Neanderthal Navalmaíllo Rock Shelter site (Pinilla del Valle, Madrid), some 76,000 years old, whose results indicate that these Neanderthals mainly hunted large bovids and cervids.

Thanks to the taphonomic study, it has been possible to characterize the site as a “hunting camp”, meaning that it was used by these hominins as a staging post between where they caught their prey and the place of final consumption, at which the entire group would have made use of the resources the hunting parties obtained at different times.

Covering over 300 m2, this is possibly the region’s largest Neanderthal camp, and evidence had previously been found of different activities undertaken by these hominins here, such as manufacturing stone tools or the use of fire, at different moments, although little had been known about how important the faunal remains encountered were.

“We’ve been able to show with a high degree of certainty that the Navalmaíllo Neanderthals mainly hunted large bovids and cervids, which they processed there and then carried to a second place of reference. This point is very interesting, as this type of behavior has been identified at very few sites in the Iberian Peninsula. To do all this, we used very powerful statistical tools such as Artificial Intelligence”, says Moclán.

The other collaborators in this study were the researchers Rosa Huguet and Hugues Alexandre Blain, from the IPHES in Tarragona; Belén Márquez, César Laplana and María Ángeles Galindo-Pellicena, of the Museo Arqueológico Regional of Madrid; Nuria García, attached to the Universidad Complutense de Madrid; Diego Álvarez-Lao, of the Universidad de Oviedo, and the three co-directors of the Pinilla del Valle project: the geologist Alfredo Pérez González, the paleontologist Juan Luis Arsuaga and the archaeologist Enrique Baquedano.

The twentieth excavation campaign at the Pinilla del Valle sites is currently under way, from August 15th through September 15th. These excavations are being directed from the Museo Arqueológico Regional of the Comunidad de Madrid, and they are financed by the Comunidad de Madrid. The project is also sponsored by the company Mahou San Miguel and enjoys the collaboration of the Sierra de Guadarrama National Park, the Ayuntamiento de Pinilla del Valle, the Canal de Isabel II, the Fundación General of the Universidad de Alcalá and the Dirección General de Juventud.