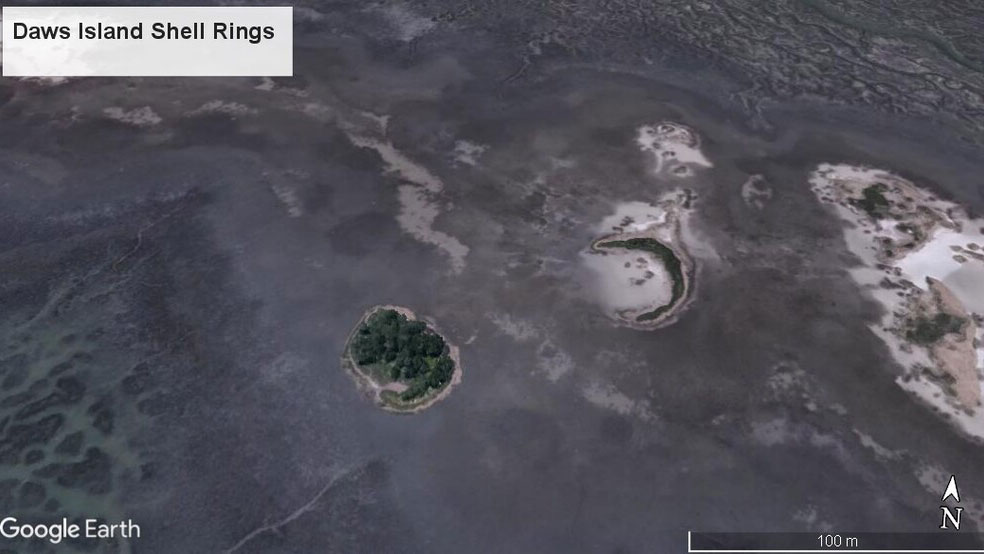 Shell rings can provide a lot of information on social constructs, politics and foraging

Deep in the dense coastal forests and marshes of the American Southeast lie shell rings and shell mounds left by Indigenous people 3,000 to 5,000 years ago. Now an international team of researchers, using deep machine learning to assess remote sensing data, has located previously undiscovered shell rings. The researchers hope this will lead to a better understanding of how people lived in that area and a way to identify other, undiscovered shell rings.

“The rings themselves are a treasure trove for archaeologists,” said Dylan S. Davis, doctoral candidate in anthropology at Penn State. “Excavations done at some shell rings have uncovered some of the best preservation of animal bones, teeth and other artifacts.”

Shell rings are thought to be centers of exchange of goods, according to Davis. They can provide a lot of information on social constructs, politics and foraging. They might show what resources were exploited and whether they were sustainably or not sustainably used.

“The shell rings have produced copper that came from the Great Lakes region to the Southeast,” said Davis. “Archaeologists also find ceramics, decorative items and lithics that may have come from up to 100 miles away.”

According to Davis, the environments where these shell rings exist are sometimes so difficult to survey that a person could be standing within 2 feet of a site and never see it.

Rather than look from the ground, the researchers used three types of existing data collected either by aircraft or satellite — lidar, SAR and multispectral data. They report the results of their study in a recent issue of the Journal of Archaeological Science.

They began with a lidar dataset of the southeastern U.S. coast produced by the U.S. National Oceanic and Atmospheric Administration. These datasets, available to the public, exist for both the East and West coasts of the country. Lidar, usually obtained by airplane or drone, uses pulses of light to map the surface of an area. It is capable of “seeing” through forests and other ground cover.

The researchers used a “deep learning” process to teach a Convolutional Neural Network — a type of neural network used to analyze visual information — to recognize shell rings, shell mounds and other landscape objects. They manually went over the lidar maps and located known shell rings. Reserving some of the known rings to test the CNN later, they “taught” the neural network with these known rings, with images of mounds and with modern structures with similar profiles. They also took images of known rings and created more data by turning the images 45 degrees. These altered sites were also included.

“There are only about 50 known shell ring sites in the Southeastern U.S.,” said Davis. “So, we needed more locations for training.”

SAR data — synthetic aperture radar — from the European Space Agency’s Sentinel-1 satellite and multispectral data — imaging beyond the visual spectrum — from ESA’s Sentinel-2 satellite, added to the information. SAR can see somewhat through trees and brush and can supply information on soil attributes. Multispectral imaging can reveal features not seen by the human eye.

Combining these three datasets and using deep training, the researchers were able to potentially identify hundreds of new shell ring sites, including three to five new shell ring sites in counties where these rings were never discovered before. The research covered an area containing three counties —  an approximately 4,000-square-mile area.

“Archaeologists are using more and more AI and automation techniques,” said Davis. “It can be extremely complicated and requires specific skill sets and usually requires large amounts of data.”

The researchers note that they used artificial intelligence algorithms that are already included in ARCGIS, a commercially available geographic information system program. They also provide the code and models in their paper so that others can attempt this type of analysis in other areas for other things.

“One difficulty with deep learning is that it usually requires massive amounts of information for training, which we don’t have when looking for shell rings,” said Davis. “However, by augmenting our data and by using synthetic data, we were able to get good results, although, because of COVID-19, we have not been able to check our new shell rings on the ground.”

Other researchers on this project include Gino Caspari, a postdoctoral fellow at the Swiss National Science Foundation; Carl P. Lipo, professor of anthropology and associate dean for research and programs at Binghamton University; and Matthew C. Sanger, curator at the National Museum of the American Indian.