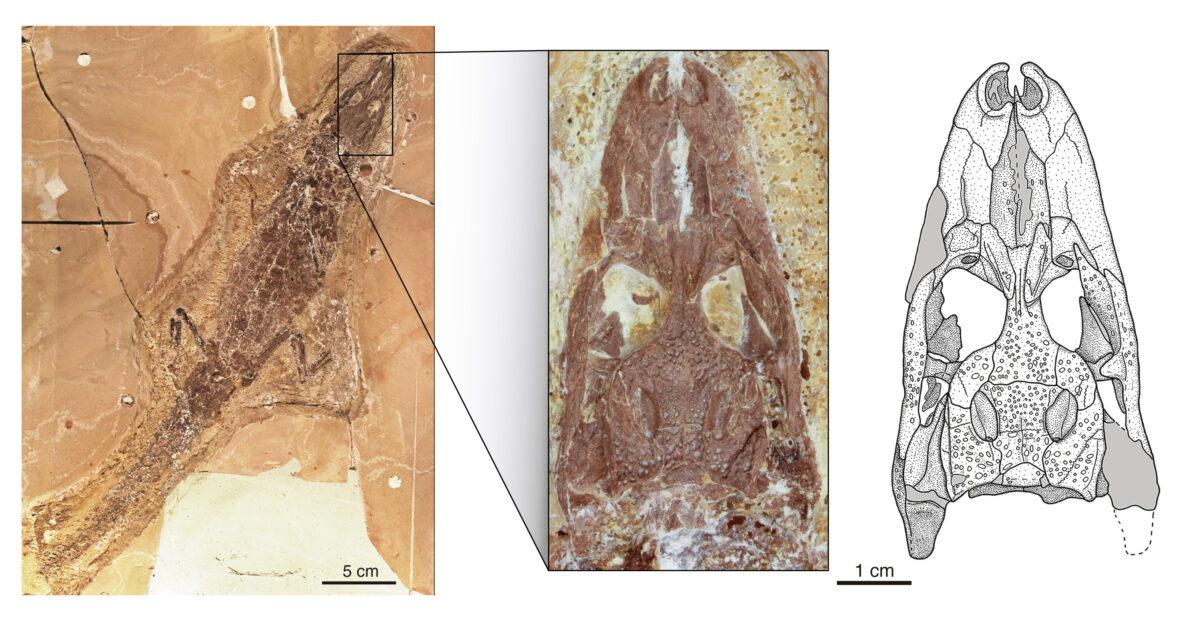 Study by University of Tübingen

A new study of two approximately 52-million-year-old fossil finds from the Green River Formation in Wyoming, USA, has fitted them into the evolutionary history of crocodiles. Biogeologists Jules Walter, Dr. Márton Rabi of the University of Tübingen, working with some other colleagues, determined the extinct species Tsoabichi greenriverensis to be an early caiman crocodile. Species of caimans living today do not occur in North America. Their family tree reflects their history of migrations and dispersals. The study has been published in the latest edition of Historical Biology.

Most caimans living today are about 1.5 to 2.5 meters long. They are found in tropical freshwater wetlands, rivers, lakes and swamps in Mexico, Central and South America. Their closest living rela-tives are the alligators of North America and Asia. “Complete skeletons of crocodiles from 50 million years ago, like the finds we studied, are very rare in what is now the United States,” says Márton Rabi.

In their study, the researchers investigated the question of whether the caimans originally came from North or Central America. “Using other caiman fossils from Central America, we determined that these species actually represent extinct species more closely related to caimans living today. How-ever, the caimans originally evolved in North America,” says Jules Walter. He added that the cai-mans probably spread from there to South America in the Cretaceous period about 66 million years ago – around the time of the mass extinction of the dinosaurs.

“Of all the dinosaur species, only the ancestors of today’s birds survived. However, freshwater spe-cies such as crocodiles were not as strongly affected by the great extinction,” Walter explains. In the Cretaceous, he says, North and South America were connected only by a chain of islands, so cai-mans had some difficulties to overcome. “Nevertheless, it wasn’t the only dispersal between North to South America during evolution; there must have been further migrations between the two conti-nents,” he says.

The researchers’ study of the crocodiles’ family tree suggests that either a species of caiman devel-oped in South America migrated back to North America, giving rise to Tsoabichi greenriverensis and others; or that there was a later, second wave of migration from North to South America. “The cai-man species living today would then have evolved from this group,” Rabi explains. In the more re-cent geological past, he says, caimans again advanced from the south into Central America, this time the living species. However, since there were no longer any suitable corridors with wetlands to the north during this period, they did not reach North America.

“The evolutionary history of caimans underscores that the ability to migrate and spread is crucial. A species’ ability to do this – or to diverge into new species – is often the only way it can survive when the environment changes,” Rabi says. Today, he stresses, the destruction of many habitats by hu-mans is leading to isolated populations. Species often cannot spread further even if, for example, a changing climate puts pressure on them to do so.