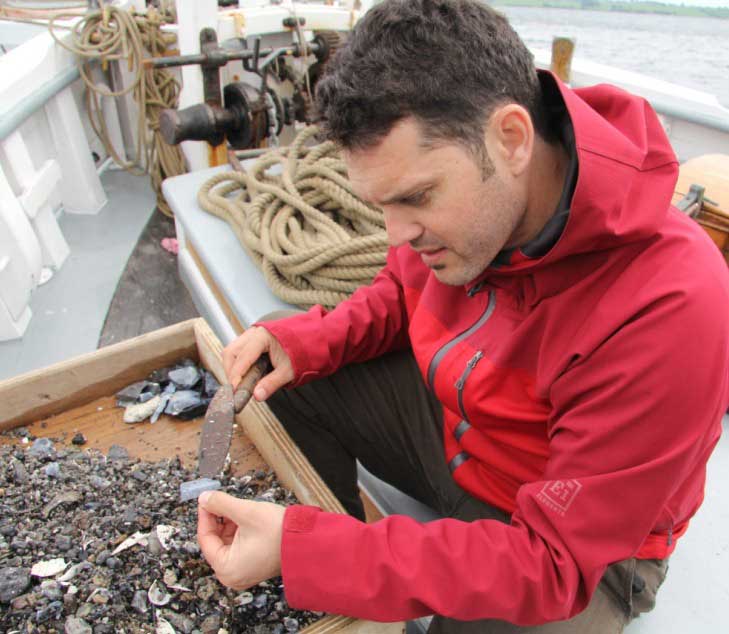 As a specialist in prehistoric underwater archaeology, Dr Jonathan Benjamin looks at rising sea levels a little bit differently from most people.

His fascination with them began when as a PhD candidate at Edinburgh University he came across the work of the Danish archaeologists Anders Fischer and Søren H Anderson. In the 1970s and 1980s, Fischer and Anderson recovered some of the most well preserved material ever seen from sites such as the 6,500-year-old settlement at Tybrind Vig. These underwater prehistoric sites, which included dugout boats and highly ornamented wooden paddles, gave unprecedented insight into the everyday lives of the Stone Age societies of Northern Europe.

But it wasn’t just the artefacts that captured Dr Benjamin’s imagination; it was where they were discovered. The site at Tybrind Vig was some 250 metres from shore in the western Baltic Sea, under three metres of water.

One of the first pages in Dr Benjamin’s own book Submerged Prehistory, of which he is the principal editor, is dedicated to a graph which shows global sea level rise of up to 130 metres between 18,000 and 5,000 years ago.

Given the tendency of humans to establish settlements along the coast, and early human migratory patterns, which also follow coastal routes, it’s not difficult to appreciate just how many settlements might have been swallowed up by the ocean over the past 15,000 years.

Surprisingly, in spite of the apparently self-evident nature of that conclusion, and 30 years after the remarkably well-preserved discoveries from Denmark (with further work pouring in from around the world), prehistoric underwater archaeologists are still relatively rare.

This paradigm, however, is changing and Dr Benjamin, although he considers himself amongst the second generation of submerged prehistoric specialists, is at the forefront.

Although he trained in the UK and lived in Scotland for over a decade, Dr Benjamin, is a Californian in his mid-thirties. He is also, as you might expect, an experienced Scuba diver.

He explained why this area of archaeology remains, for the most part, historically underrepresented: “Investigating the entire drowned continental shelf would be astronomically expensive, so we have to be very thoughtful about how we approach our study areas, or seek data and material which is accessible or already available,” Dr Benjamin said.

“It can be very expensive and time consuming to go searching underwater, but more and more we are seeing the investment in such research pay off. New archaeological sites have been found in the past decade in areas once thought impossible for such discovery.

“Some of prehistoric underwater archaeology’s most important discoveries happened after tip-offs from local residents, recreational divers, fishermen and even maritime archaeologists working on shipwrecks.

“As practitioners, policy makers and the public become increasingly aware of this phenomenon, we can expect to see underwater contributions to world prehistory increase.

“It is also important that we engage with industry in a collaborative manner. Sectors such as dredging, marine aggregates and oil and gas exploration companies have the means and will to collect large-scale data sets providing information about the nature and environment of the seabeds.

“The exploration of mutual interests and research collaborations between archaeologists, geologists and ocean scientists, who may already command the facilities for the purposes of geophysical and environmental survey, are likely to play an important role in future research.

“We are looking at the next frontier of archaeology. Only through interdisciplinary cooperation will we continue to push the envelope and make step-change advancements in maritime and prehistoric archaeology.”

Dr Benjamin is a Lecturer in Maritime Archaeology at Flinders, where he works closely with Dr Wendy Van Duivenvoorde.

Having travelled and worked in Britain, Slovenia, Croatia, Cyprus, Israel, Denmark and North America, he is interested in the possibilities that exist off the coast of Australia.

“There has been some preliminary work done here in Australia and, given the evidence, there is every reason to suggest that the last major sea-level change would have had a profound effect on the people who lived in coastal environments between 18,000 and 5,000 years ago.

“If we look in the right places, I would expect that palaeo-indigenous sites and artefacts that are more than 5,000 years old do exist, and in some cases are likely to be well preserved on and under the seabed and in the intertidal zone.

“That said, it will take time, patience and more than one or two people for the field to establish itself here. We will need committed archaeologists and geomorphologists cooperating not only within academia, but with industry, indigenous groups, coastal communities and other interested stakeholders.”