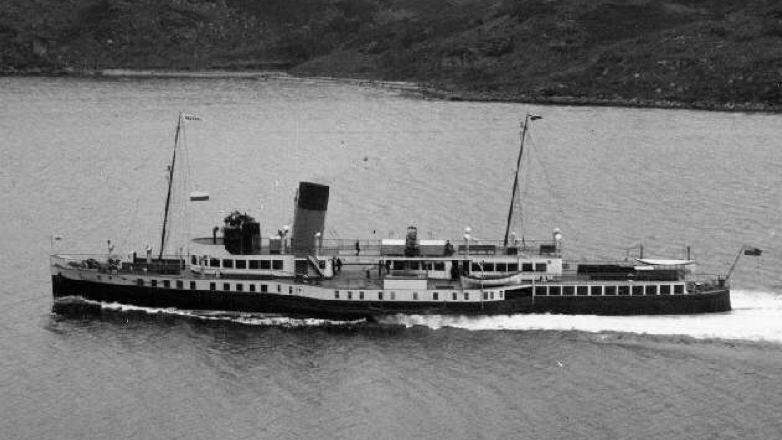 Discovery of the minesweeper HMS Mercury

In the Southern Irish Sea

A shipwreck in the middle of the Southern Irish Sea, previously thought to be that of a submarine, has now been identified as the minesweeper, HMS Mercury.

The discovery has been made as part of a joint project between Maritime Archaeologists at Bournemouth University and scientists at Bangor University’s School of Ocean Sciences, who have been combining marine archives with high-resolution multibeam sonar data to try and identify many of the unknown wreck sites located off our coast.

Originally built as a Clyde-based ferry, HMS Mercury was requisitioned by the Admiralty in 1939 to serve as minesweeper. It sank in 1940 after being damaged by a mine that it was attempting to clear and was reported lost off Southern Ireland.

As part of the ongoing research programme Dr Innes McCartney of Bournemouth University has been compiling detailed lists of all ships lost in the Irish Sea: “The wreck site was assumed to be the final resting place of a submarine. Once the sonar data had been processed, the wreck resembled a paddle wheeled vessel with its paddles boxed into the vessel’s superstructure, rather than the characteristic tube-like profile associated with submarine wrecks. Within our database of shipping losses there was only one possible candidate which featured boxed in paddle wheels; the minesweeper HMS Mercury”

Originally named Mercury II the ship was built in 1934 for the London Midland Scottish Railway and was an excursion passenger steamer which primarily worked the Greenock, Gourock and Wemyss Bay route. The ship was a 223ft long paddle steamer and recognisable by having newer innovations such as its boxed in paddles and a cruiser stern, with its sister Caledonia II, it gave good service up 1939, when it was subsequently requisitioned for war service as a minesweeper.

The official list of losses of naval vessels in WW2 states that HMS Mercury was “sunk after damage by own mine south of Ireland”. In fact, research at the National Archives revealed that the incident initially occurred off the Saltee Islands, Southern Ireland when at 4.30 in the afternoon on Christmas Day 1940, HMS Mercury was sweeping up an older British minefield. Initially unknown to Mercury, a mine was snagged in its sweeping gear and whilst trying to clear it, the mine was drawn too close to the ship, where it exploded under the stern. Still afloat and with hopes high of saving the ship, HMS Mercury was then towed towards Milford Haven but unfortunately after around 2 hours, the cable parted under the strain of the slowly flooding ship. Despite the determined efforts of the crew to save her, the vessel sank vertically, stern first at around 8.30 in the evening, thankfully the entire crew were subsequently rescued.

Temporary Lieutenant Bertrand Palmer who was in command of HMS Mercury was eventually reprimanded after a court martial which found that he had acted contrary to standing orders in stopping the ship and not immediately making headway once the mine had been sighted.

Mercury’s sister ship Caledonia II served throughout WW2 as HMS Goatfell, after which it returned to service. When sold in 1971, it was bought by the Bass Charrington Group and served as a popular floating pub on the river Thames before suffering a fire in 1980.

HMS Mercury is just one of over 300 shipwrecks in the Irish Sea which have been surveyed by Bangor University’s research vessel Prince Madog using their state-of-the-art mutibeam sonar system and through this unique collaboration with Bournemouth University, the identification of each site and subsequent link to a specific historic event continues to evolve and will be published when complete as Dr McCartney’s Leverhulme Trust funded fellowship “Echoes from the Deep: Modern Reflections on our Maritime Past”.

Dr Innes McCartney: ‘This highly innovative research project has resulted in many new discoveries dating from both world wars, of which HMS Mercury is just one example. This new collaboration with Bangor University demonstrates the substantial benefits that can be obtained through combining scientific survey with maritime archives and illustrates how this can be used as a powerful and effective research tool that can significantly enhance our understanding of the historic maritime environment by allowing us to identify unknown wrecks, refine existing attributes and confirm vessel identities.’

Dr Michael Roberts from Bangor University who led the multibeam surveys: ‘Having access to our research vessel Prince Madog and use of one of the most advanced multibeam sonar systems available has enabled us to very efficiently and accurately survey almost every wreck site in the central Irish Sea. Obtaining high-resolution sonar data from all these sites has been crucial to the research process and we hope this work and collaboration with Bournemouth demonstrates the importance of having these valuable assets available to us here at Bangor. These sunken vessels represent the sacrifices and efforts of citizens who were the ‘key’ and ‘essential’ workers of their time and it’s important that the final resting place of the vessels they were associated with are identified before it’s too late.  We hope to secure additional funding to expand on this work and examine wrecks in other UK coastal regions before their remnants become unidentifiable due to degradation through natural marine processes.’