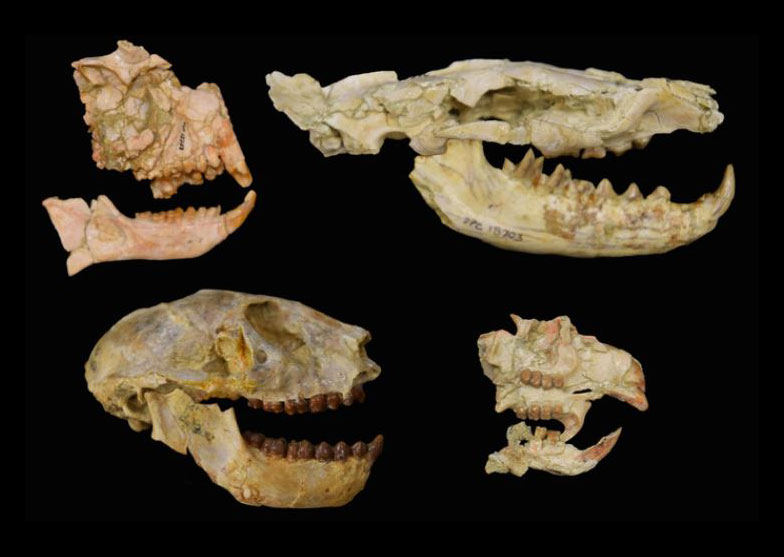 The climate-driven mass extinction no one had seen

Sixty-three percent. That’s the proportion of mammal species that vanished from Africa and the Arabian Peninsula around 30 million years ago, after Earth’s climate shifted from swampy to icy. But we are only finding out about it now.

Compiling decades of work, a new study published this week in the journal Communications Biology reports on a previously undocumented extinction event that followed the transition between the geological periods called the Eocene and Oligocene.

That time period was marked by dramatic climate change. In a reverse image of what is happening today, the Earth grew cooler, ice sheets expanded, sea levels dropped, forests started changing to grasslands, and carbon dioxide became scarce. Nearly two-thirds of the species known in Europe and Asia at that time went extinct.

African mammals were thought to have possibly escaped unscathed. Africa’s mild climate and proximity to the Equator could have been a buffer from the worst of that period’s cooling trend.

Now, thanks in great part to a large collection of fossils housed at the Duke Lemur Center Division of Fossil Primates (DLCDFP), researchers have shown that, despite their relatively balmy environment, African mammals were just as affected as those from Europe and Asia. The collection was the life’s work of the late Elwyn Simons of Duke, who scoured Egyptian deserts for fossils for decades.

The team, comprising researchers from the United States, England, and Egypt, looked at fossils of five mammal groups: a group of extinct carnivores called hyaenodonts, two rodent groups, the anomalures (scaly-tail squirrels) and the hystricognaths (a group that includes porcupines and naked mole rats), and two primate groups, the strepsirrhines (lemurs and lorises), and our very own ancestors, the anthropoids (apes and monkeys).

By gathering data on hundreds of fossils from multiple sites in Africa, the team was able to build evolutionary trees for these groups, pinpointing when new lineages branched out and time-stamping each species’ first and last known appearances.

Their results show that all five mammal groups suffered huge losses around the Eocene-Oligocene boundary.

“It was a real reset button,” said Dorien de Vries, a postdoctoral researcher at the University of Salford and lead author of the paper.

After a few million years, these groups start popping up again in the fossil record, but with a new look. The fossil species that re-appear later in the Oligocene, after the big extinction event, are not the same as those that were found before.

“It’s very clear that there was a huge extinction event, and then a recovery period,” said Steven Heritage, Researcher and Digital Preparator at Duke University’s DLCDFP and coauthor of the paper.

The evidence is in these animals’ teeth. Molar teeth can tell a lot about what a mammal eats, which in turns tells a lot about their environment.

“We see a huge loss in tooth diversity, and then a recovery period with new dental shapes and new adaptations,” said de Vries.

“Extinction is interesting in that way,” said Matt Borths, curator of Duke University’s DLCDFP and coauthor of the paper. “It kills things, but it also opens up new ecological opportunities for the lineages that survive into this new world.”

This decline in diversity followed by a recovery confirms that the Eocene-Oligocene boundary acted as an evolutionary bottleneck: most lineages went extinct, but a few survived. Over the next several millions of years, these surviving lines diversified.

“In our anthropoid ancestors, diversity bottoms out to almost nothing around 30 million years ago, leaving them with a single tooth type,” said Erik R. Seiffert, Professor and Chair of the Department of Integrative Anatomical Sciences at the Keck School of Medicine of the University of Southern California, a former graduate student of Simons, and senior coauthor of the paper. “That ancestral tooth shape determined what was possible in terms of later dietary diversification.”

“There’s an interesting story about the role of that bottleneck in our own early evolutionary history,” said Seiffert. “We came pretty close to never existing, if our monkey-like ancestors had gone extinct 30 million years ago. Luckily they didn’t.”

A rapidly changing climate wasn’t the only challenge facing these few surviving types of mammals. As temperatures dropped, East Africa was pummeled by a series of major geological events, such as volcanic super eruptions and flood basalts – enormous eruptions that covered vast expanses with molten rock. It was also at that time that the Arabian Peninsula separated from East Africa, opening the Red Sea and the Gulf of Aden.

“We lost a lot of diversity at the Eocene-Oligocene boundary,” said Borths. “But the species that survived apparently had enough of a toolkit to persist through this fluctuating climate.”

“Climate changes through geological time have shaped the evolutionary tree of life,” said Hesham Sallam, founder of the Mansoura University Vertebrate Paleontology Center in Egypt and coauthor of the paper. “Collecting evidence from the past is the easiest way to learn about how climate change will affect ecological systems.”