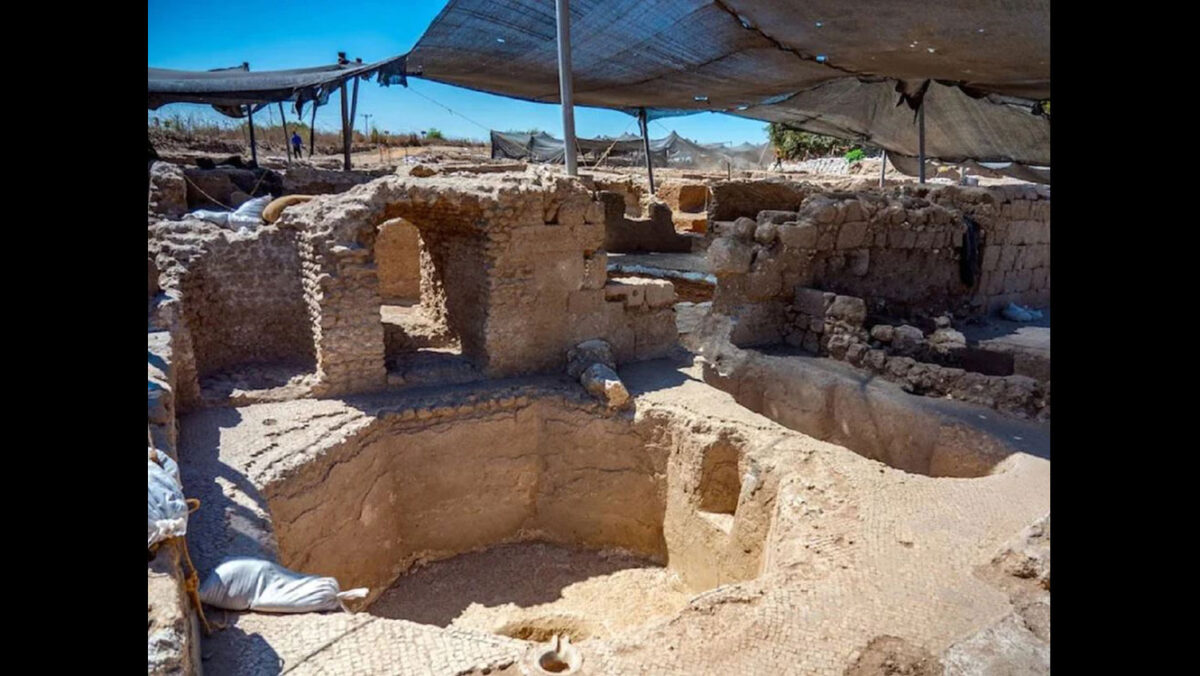 Massive and Impressive Wine Factory is Exposed in Israel

An Archaeological Sensation in Yavne: A massive and impressive wine factory hass been exposed.

“Approximately two million liters of wine are produced here every year”, archaeologists say. The huge 1,500-year-old industrial estate has been uncovered in archeological excavations conducted by the Israel Antiquities Authority as part of the development of the city of Yavne, at the initiative of the Israel Land Authority.

Yavne was a world wine powerhouse about 1,500 years ago: a vast and well-designed industrial estate from the Byzantine period, with an impressive wine production complex (the largest known in the world from this period), has been excavated in the city over the past two years. The Israel Antiquities Authority has conducted this considerable excavation as part of the Israel Land Authority’s initiative to expand the city. The plant includes five magnificent wine presses, warehouses for aging and marketing the wine, kilns for firing the clay amphorae in which the wine was stored, tens of thousands of fragments, and intact earthen amphorae (jars), well-planned access between the facilities, and more.

Drinking wine was very common in ancient times for children and adults alike. Since the water was not always sterile and or even tasty, wine was also used as a kind of “concentrate” to improve the taste or substitute for drinking water. Each of the exposed winepresses covered an area of about 225 square meters. Around the treading floor, where the grapes were crushed barefoot to extract the liquid, compartments were built to ferment the wine, and next to them were two substantial octagonal-shaped vats for collecting the wine.

Dr. Elie Haddad, Liat Nadav-Ziv, and Dr. Jon Seligman, the excavation directors on behalf of the Israel Antiquities Authority, noted, “we were surprised to discover a sophisticated factory here, which was used to produce wine in commercial quantities. Furthermore, decorative niches in the shape of a conch, which adorned the winepresses, indicate the great wealth of the factory owners. A calculation of the production capacity of these winepresses shows that approximately two million liters of wine were marketed every year. At the same time, we should remember that the whole process was conducted manually.”

Between the winepresses, four large warehouses were discovered, which formed the winery of the factory. The wine is aged in elongated amphorae, known as ‘Gaza jars.’ The jars themselves, some of which were discovered complete, together with hundreds of thousands of fragments, were made at the site in large kilns.

“Gaza and Ashkelon Wine” was considered a quality wine brand of the ancient world, whose reputation has spread far and wide, a bit like Jaffa oranges denote their origin and quality today from Israel, “the archaeologists explained. Everyone knew that this was a product from the Holy Land product, and everyone wanted more and more of this wine. The wine received its name as it was marketed through the ports of Gaza and Ashkelon. So far, other sites where wine was produced are known from the southern coastal plain, but now, we seem to have found the main production center of this prestigious wine. From here, commercial quantities were transported to the ports, and then throughout the Mediterranean basin”.

Interestingly, the excavation in Yavne revealed rare and even older winepresses from the Persian period, about 2300 years ago. “In the Mishna, it is said that after the destruction of Jerusalem, the Jewish leadership migrated to Yavne and that the sages of Yavne lived in a vineyard and studied Torah. The excavation shows a continuum of the existence of the wine industry at the site over many centuries of years”, say the archaeologists.

According to Eli Eskozido, Director of the Israel Antiquities Authority, “The Yavne excavation is a mega-excavation of the Israel Antiquities Authority with the participation of hundreds of workers, dozens of permanent staff and experts. As an organization that wants to connect the public to its heritage, the IAA has involved youth and residents of Yavne in the excavation. Our archaeologists are doing sacred work by exposing unknown chapters of the country’s history while working hard in the heat and cold. I welcome the cooperation with the Israel Land Authority and the Yavne Municipality.”

According to the Israel Land Authority director, Yaakov Quint, “the treasures that are part of the land have been exposed thanks to the Israel Lands Authority’s extensive investment in financing the Yavne archeological excavations.” 1049). The Israel Lands Authority’s plan, together with the Municipality of Yavne, includes 12,500 housing units and 450,000 square meters of commercial and employment space. The program consists of doubling up the railway track and new construction over the train station. As part of the preliminary works for the plan’s development, the Israel Land Authority is investing approximately NIS 200 million in the works of the Israel Antiquities Authority, which will enable the archaeological finds to be exposed, investigated, and preserved for future generations.”

Mayor of Yavne, Zvi Gov-Ari: “The impressive findings strengthen the recognition of the importance of the city of Yavne and its glorious past throughout history.” We have decided that Tel Yavne will be preserved and upgraded to become a focal point for tourism and education in the future. The development plan includes a bridge over the site that will allow the finds to continue to exist. In cooperation with the Israel Antiquities Authority, this type of activity has not been done in other projects in the country, and this is an opportunity to thank all parties for their cooperation.”