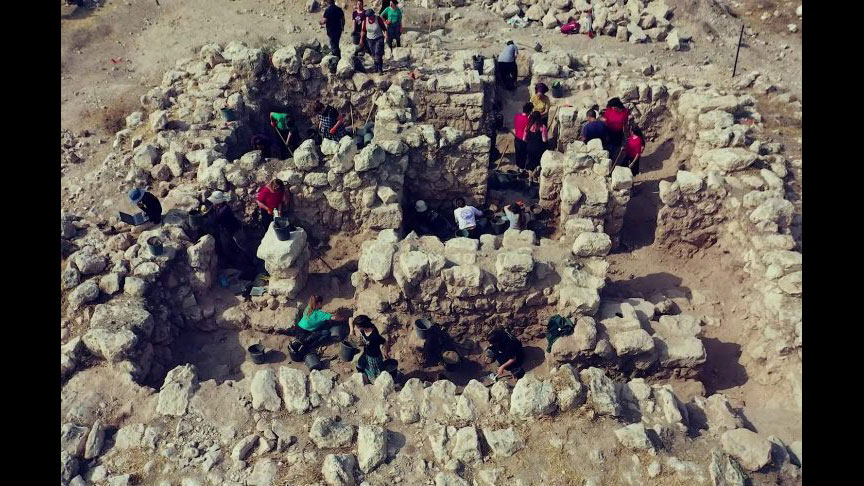 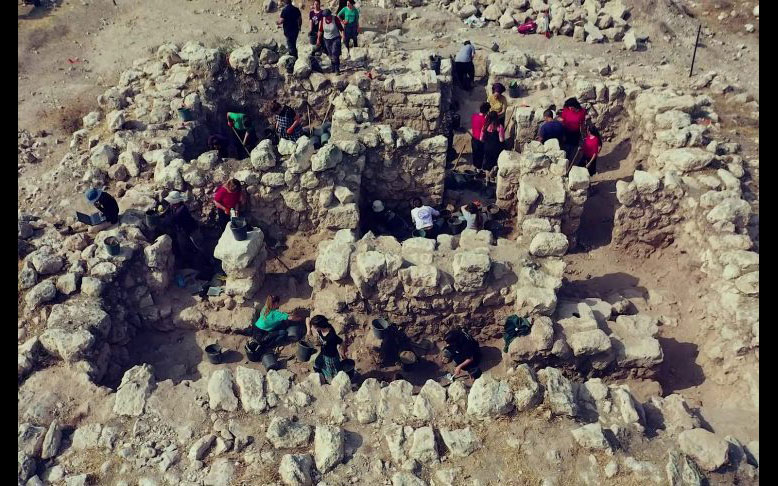 In the Judean Shephelah

“The building’s devastation is probably related to the region’s conquest by the Hasmonean leader John Hyrcanus in around 112 BCE,” said Israel Antiquities Authority archaeologists directing the excavations funded by the Ministry of Jerusalem and Heritage’s Landmarks project and assisted by high-school students majoring in the Ministry of Education’s Land of Israel Studies and Archaeology program.

Weapons, burnt wooden beams, dozens of coins, and a Hellenistic fortified structure—tangible evidence of a battle between the Hasmoneans and the Seleucids some 2,100 years ago—are currently being unearthed in Israel Antiquities Authority excavations in the Lachish Forest. The excavations are being conducted as part of the Kings of Judah Road project, in cooperation with the Jewish National Fund, funded by the Jerusalem and Heritage Ministry, assisted by high-school students majoring in the Ministry of Education’s Land of Israel Studies and Archaeology program, and students from the Asher Ruach Bo pre-military program in Mitzpe Ramon for youths at risk.

According to Saar Ganor, Vladik Lifshits, and Ahinoam Montagu, excavation directors on behalf of the Israel Antiquities Authority, “The excavation site provides tangible evidence of the Hanukkah stories. It appears that we have discovered a building that was part of a fortified line erected by the Hellenistic army commanders to protect the large Hellenistic city of Maresha from a Hasmonean offensive. However, the finds from the site show that the Seleucid defenses were unsuccessful; the excavated building was badly burnt and devastated by the Hasmoneans.”

The excavation revealed a 15 × 15m (160 x 160 ft) building planned as a well-fortified unit. The external walls, no less than 3m (11 ft) wide, were built of large stones and had a sloping outer glacis to prevent the wall from being scaled. The inside of the structure was divided into seven rooms, preserved to an exceptional height of roughly 2m (11ft). The excavation uncovered a stairwell leading to a second floor which was not preserved. The building is estimated to have been about 5m (54 ft) high.

The site lies on the summit of a high hill commanding a view of the ancient main road, which ran along the Nahal Lachish streambed and connected the coastal plain to the central highland ridge. The building overlooks Maresha, the largest Hellenistic city in the area and the capital of Idumea in the Hellenistic period.

Students majoring in the Ministry of Education’s Land of Israel Studies and Archaeology program from schools in Be’er Sheva, Dimona and Nitzan assisted in the excavation as part of an Israel Antiquities Authority’s program aimed at nurturing awareness of the country’s heritage in the community. The students learn about history through hands-on experience as part of their matriculation studies, thus turning the archaeological excavation into an educational science laboratory. The excavations were also joined by students from the Asher Ruach Bo pre-military program in Mitzpe Ramon for youth at risk, as part of a week in which the youths make a significant contribution to the community.

During the excavation, thousands of large stones that had collapsed from the upper part of the building were removed. A massive destruction layer, about half a meter thick, was discovered beneath the stones. The layer yielded hundreds of finds, including pottery, slingshots, iron weapons, burnt wooden beams and dozens of coins dated to the late second century BCE. “Based on the finds and coins, the building’s destruction can be attributed to the Hasmonean leader John Hyrcanus’s conquest of the region of Idumea in around 112 BCE,” say the archaeologists.

The Hasmoneans, whose rebellion against Hellenistic rule and the Seleucid dynasty followed the anti-Jewish decrees of Antiochus IV, waged many battles against the Seleucid army. John Hyrcanus’s conquests, described in the Books of the Maccabees and the accounts of the historian Josephus, led to the Hasmonean state’s southward expansion.

According to the Israel Antiquities Authority’s general director, Eli Eskozido, “The stories of the Maccabees are coming to life before our eyes, and this is the most fascinating part of the Israel Antiquities Authority’s work, when dedicated, hardworking archaeologists breathe life into the historical annals of the people who passed through this land. In a few days, we will be celebrating Hanukkah, whose central theme is the Hasmoneans’ defeat of the Hellenists, leading to the establishment of the first independent sovereign Jewish entity. The Hasmoneans could have had no idea that 2,000 years later, students living in the State of Israel would be following in their footsteps. It is extremely exciting.”

Minister of Construction and Housing, Jerusalem and Heritage, Zeev Elkin: “The impressive discoveries from the excavations in the Lachish region demonstrate the history of our great and wonderful land and the story of Hanukkah. The Landmarks program led by the Ministry of Jerusalem and Heritage, for which I am responsible, continues to develop national and historical heritage sites on a daily basis. Over the upcoming Hanukkah holiday, we will be marking Heritage Week throughout the country and I invite the general public to visit, discover and experience our national heritage sites.”

Minister of Culture and Sports, Chili Tropper: “The Israel Antiquities Authority’s fascinating new discovery is a classic example of how traditional, well-known and well-loved stories become part of the historical and archaeological record. The building’s excavation reflects the glorious roots of the Jewish people in the Land of Israel and brings the Hanukkah stories to life. Added impetus was given to the event by the participation of dozens of youths, who were given a rare opportunity to encounter the history of the Jewish people, face to face. The Ministry of Culture and Sports will continue to support this important enterprise, which combines heritage, history and culture.”

After the excavations, the building will undergo conservation and will be opened to the general public in cooperation with the Jewish National Fund’s Southern District, as one of the sites along the Kings of Judah Road, which is currently under development.

NOTES
1. The Friends of the Israel Antiquities Authority, https://www.friendsofiaa.org/news