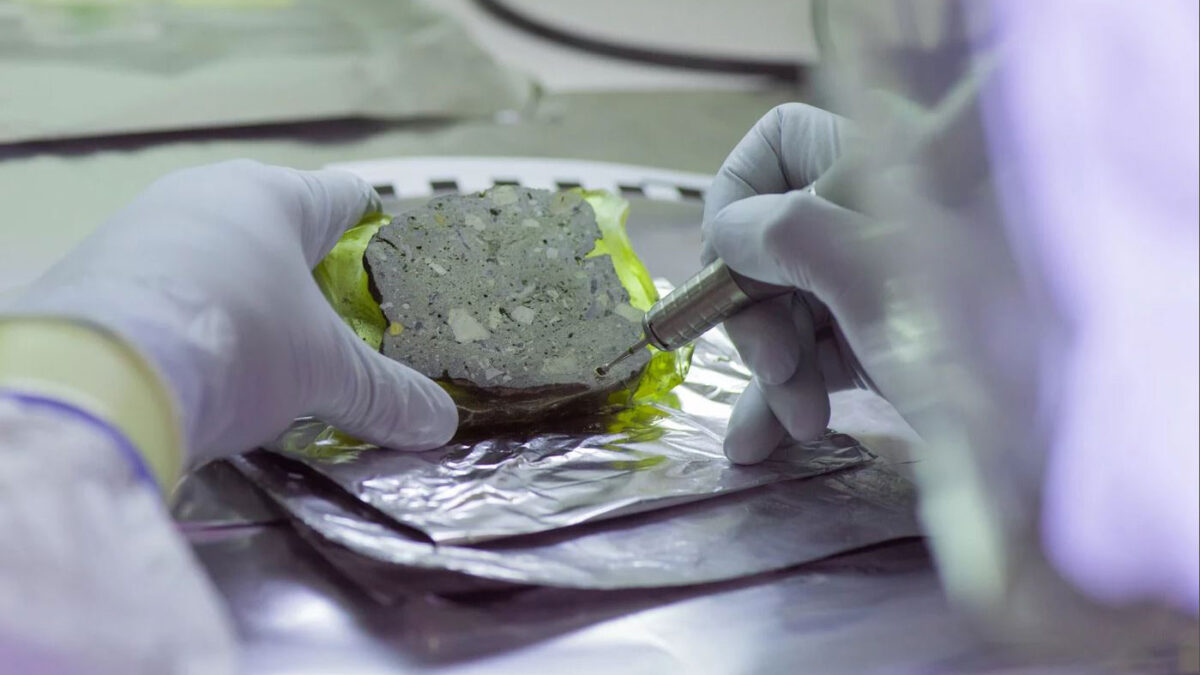 DNA in archaeological sediments for long periods of time

Study by an international team of researchers

The analysis of ancient DNA preserved in sediments is an emerging technology allowing for the detection of the past presence of humans and other animals at archaeological sites. Yet, little is known about how DNA is preserved in sediment for long periods of time. An international team of researchers involving scientists from the Max Planck Institute for Evolutionary Anthropology in Leipzig and other institutions in Germany, Australia, Portugal, and Russia have now shed light on the matter by isolating DNA from solid blocks of undisturbed sediment that are embedded in plastic resin. The study reveals that ancient human and animal DNA is concentrated in small ‘hot spots’, particularly in microscopic particles of bone or feces. Micro-sampling of such particles can recover substantial amounts of DNA from ancient humans, such as Neanderthals, and other species and link them to archaeological and ecological records at a microscopic scale.

Sediments in which archaeological finds are embedded have long been regarded by most archaeologists as unimportant by-products of excavations. However, in recent years it has been shown that sediments can contain ancient biomolecules, including DNA. “The retrieval of ancient human and faunal DNA from sediments offers exciting new opportunities to investigate the geographical and temporal distribution of ancient humans and other organisms at sites where their skeletal remains are rare or absent”, says Matthias Meyer, senior author of the study and researcher at the Max Planck Institute for Evolutionary Anthropology in Leipzig.

To investigate the origin of DNA in the sediment, Max Planck researchers teamed up with an international group of geoarchaeologists – archaeologists who apply geological techniques to reconstruct the formation of sediment and sites – to study DNA preservation in sediment at a microscopic scale. They used undisturbed blocks of sediment that had been previously removed from archaeological sites and soaked in synthetic plastic-like (polyester) resin. The hardened blocks were taken to the laboratory and sliced in sections for microscopic imaging and genetic analysis.

The researchers successfully extracted DNA from a collection of blocks of sediment prepared as long as 40 years ago, from sites in Africa, Asia, Europe and North America. “The fact that these blocks are an excellent source of ancient DNA – including that originating from hominins – despite often decades of storage in plastic, provides access to a vast untapped repository of genetic information. The study opens up a new era of ancient DNA studies that will revisit samples stored in labs, allowing for analysis of sites that have long since been back-filled, which is especially important given travel restriction and site inaccessibility in a pandemic world”, says Mike Morley from Flinders University in Australia who led some of the geoarchaeological analyses.

Abundance of micro remains in the sediment matrix

The scientists used blocks of sediment from Denisova Cave, a site located in the Altai Mountains in South Central Siberia where ancient DNA from Neanderthals, Denisovans and modern humans has been retrieved, and showed that small organic particles yielded more DNA than sediment sampled randomly. “It clearly shows that the high success rate of ancient mammalian DNA retrieval from Denisova Cave sediments comes from the abundance of micro remains in the sediment matrix rather than from free extracellular DNA from feces, bodily fluids or decomposing cellular tissue potentially adsorbed onto mineral grains”, says Vera Aldeias, co-author of the study and researcher at the University of Algarve in Portugal. “This study is a big step closer to understand precisely where and under what conditions ancient DNA is preserved in sediments”, says Morley.

The approach described in the study allows highly localized micro-scale sampling of sediment for DNA analyses and shows that ancient DNA (aDNA) is not uniformly distributed in the sediment; and that specific sediment features are more conducive to ancient DNA preservation than others. “Linking sediment aDNA to the archaeological micro-context means that we can also address the possibility of physical movement of aDNA between sedimentary deposits”, says Susan Mentzer a researcher at the Senckenberg Centre for Human Evolution and Palaeoenvironment (Germany).

Diyendo Massilani, the lead author of the study, was able to recover substantial amounts of Neanderthal DNA from only a few milligrams of sediment. He could identify the sex of the individuals who left their DNA behind, and showed that they belonged to a population related to a Neanderthal whose genome was previously reconstructed from a bone fragment discovered in the cave. “The Neanderthal DNA in these small samples of plastic-embedded sediment was far more concentrated than what we typically find in loose material”, he says. “With this approach it will become possible in the future to analyze the DNA of many different ancient human individuals from just a small cube of solidified sediment. It is amusing to think that this is presumably so because they used the cave as a toilet tens of thousands of years ago”.