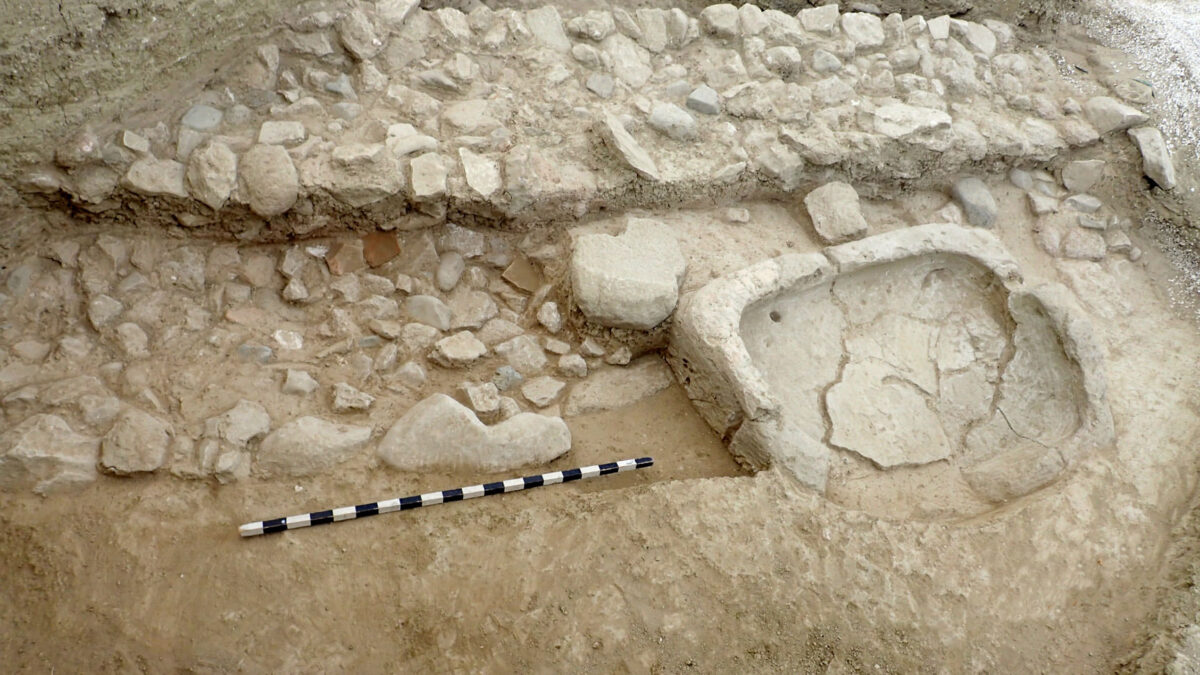 Results of the 2021 Agios Sozomenos-Djirpoulos excavations

The Department of Antiquities,of the Ministry of Transport, Communications and Works, has announced the results of the last season of excavations at the site Agios Sozomenos-Djirpoulos, and the closure of the project Agios Sozomenos Excavations and Survey Project (ASESP) in the area, under the direction of the then Curator of Αntiquities, Dr. Despina Pilides. This season started on May 10 and lasted until the 2nd of July 2021. It aimed at clarifying the plan of the architectural remains where in previous years, a complex of workshops was uncovered, by attempting to establish the extent and plan of the buildings, as far as possible. As reported in previous years, the project included a survey for the re-appraisal of earlier surveys and the location of possible new sites of the Late Bronze Age in the region of Agios Sozomenos. The survey was followed by excavation of the forts at Barsak and Nikolides in order to understand the relationship between them on one hand, as well as with the complex of workshops excavated at the foot of Barsak at the locality Djirpoulos and the storage building located on a small hill at Ampelia, which oversees the workshop complex, on the other. With this final season the project came to a close.

The 2021 excavation at the workshop complex focused on the western side, first to establish its extent and, secondly, to investigate whether it was continuous or consisted of separate units.  Thick layers of earth, probably decomposing mudbricks and a thick layer of a mixture of earth mixed with plaster, possibly the collapse of the roof, were removed throughout to reveal the wall foundations of the complex. As already confirmed in previous seasons, there were two phases in the lifespan of the complex and the later phase was heavily compromised by a destruction. As in the SE part of the complex, some of the older walls were reutilised and the rooms were generally enlarged in the later phase.  The earlier conclusion that the complex extended further to the south, in what is now the riverbed of Alykos was further confirmed and, this year’s excavation also confirmed that the building extended to the NW, indicating an extensive settlement.

The plan of both phases was in a NW-SE orientation. In the later phase, there were two large rectangular rooms, not unlike the complex in the SE part of the site, with a lot of scattered material on the interior denoting workshop activities. In the south part, a large room was investigated, delineated by walls 403, 827, 804 and 402, with an entrance on the northeast, possibly to the street. Upstanding and fallen stone slabs indicate that there must have been a stone cistern in the interior, completely dismantled, perhaps like the one found in a good state of preservation in the SE part of the complex. Large quantities of unworked gypsum slabs were found in this area, as well as different kinds of stones, obviously brought in from elsewhere for use in the workshops. Traces of clay lining on the floor may indicate the presence of a hearth, and a small pit lined with stones supported the base of a large storage jar. In the earlier phase this building was joined to the one on the SE with a corridor, which in the later phase was replaced by a street in the same direction.

On the exterior of wall 804, a large stone trough was found, originally placed on a bench, built parallel to Wall 804 (863). The trough is preserved intact, measuring 1,20m in length and 1m. wide, except that it slid off the bench at some point and its eastern side was broken. A drainage hole on its west side indicates that it may have been used as a water or liquid trough. The rim was lined with a thick layer of hydraulic plaster. A small channel was noted on its north side, about 11cm deep, which may have been connected with the stone channel found in 2019, close to wall 805, belonging to the earlier phase. On the SE of wall 804, part of a stone mould was found, as well as pithos fragments with relief decoration of parallel ridges. Some White Slip II sherds, jug fragments in Plain White Ware, cooking ware and some small handmade and burnished sherds were also among the finds. These were found above a small depression (13x63cm and 12cm deep) close to wall 804, in which there were some cooking ware sherds, an olive pip and some organic remains which were sampled for analysis, as well as a small slag fragment, confirming the nature of the activities in this complex. Animal bones, mainly teeth, were also found. To the north of Wall 804, a heavy stone concentration was noted, perhaps the collapse of a stone structure.

An adjoining room to the large rectangular room mentioned above, delineated by Wall 403, the extension of Wall 827 and Wall 851 and an entrance to the north, again possibly to the street, contained similar materials and signs of destruction. It was preceded by a smaller room outlined by older Walls (867, 868, 884, 837 and 838) with a possible entrance on the south. On the exterior of the room, very close to the steep eroded side of the riverbank, an intact stone vat was found. It is roughly oval in shape, shallow, with a concave base, measuring 63×51 cm and about 26cm deep. The absence of a drainage hole indicates that it may have been used as a settling vat.  Unlike other rooms, where the floor was made of compact earth mixed with plaster, the floor in this particular room was made of plaster and is very similar to the floor of another room in the SE part.

Wall 845 was built on top of an earlier wall of different construction. It was built of large uneven stones on either side and filled in with rubble in contrast to the walls of the older phase, which are carefully constructed of small stones and are slightly narrower. The same phenomenon occurs in the cases of Walls, 895 and 802, which seem to have formed another room, but do not tie with each other, indicating that an older wall was reused in the later phase.

In the corner of Walls 851 and 873 an ashy area was noted with a pile of gypsum slabs fallen on top, a fragmentary storage jar with traces of burning and fragments of a Base Ring juglet. Unfired clays and ceramics, close to Wall 804 indicate that this part of the workshop complex was used for the production of ceramics. Charcoal was collected from various parts of the complex and there may have been several hearths at various locations which have not been preserved, in contrast to those in the complex to the SE excavated in previous years. Below the base of an upturned pithos, a copper pin, another small fragmentary copper object, a pointed stone tool and a stone weight were found. A circular depression nearby may must have held the pithos in place. The complex extended to the north.

The ceramics include storage jars in Plain White, some cooking ware, some pithos fragments occasionally with relief decoration of parallel ridges, White Slip II, White Slip IIA and Base Ring in smaller quantities, Red Slip and Black Slip, Monochrome and some handmade sherds. Stone grinders, mortars, saddle querns, pieces of stone vats, slag and small fragments of copper objects as well as a copper pendant were found in a small area adjoining Wall 851. Gaming stones, mainly in reuse were also noted, as well as some sling stones and stone weights.

In summary, it seems that in the later phase there were complexes consisting of adjoining rooms with evidence for workshop activities in them, accessed by a street on the north side and, perhaps, on the west side of the SE complex. It also appears that there were separate complexes rather than one continuous unit, possibly dedicated to different activities.

In the earlier phase, the walls were constructed differently and rooms were smaller, although some of these walls were reused in the later phase, without, however major changes or a change in the orientation of the buildings. Initially, they were connected by a long corridor on the north, which was later substituted by a street. It is evident that the last phase suffered a severe destruction before its abandonment, which seems to be particularly heavy in the western part of the complex.