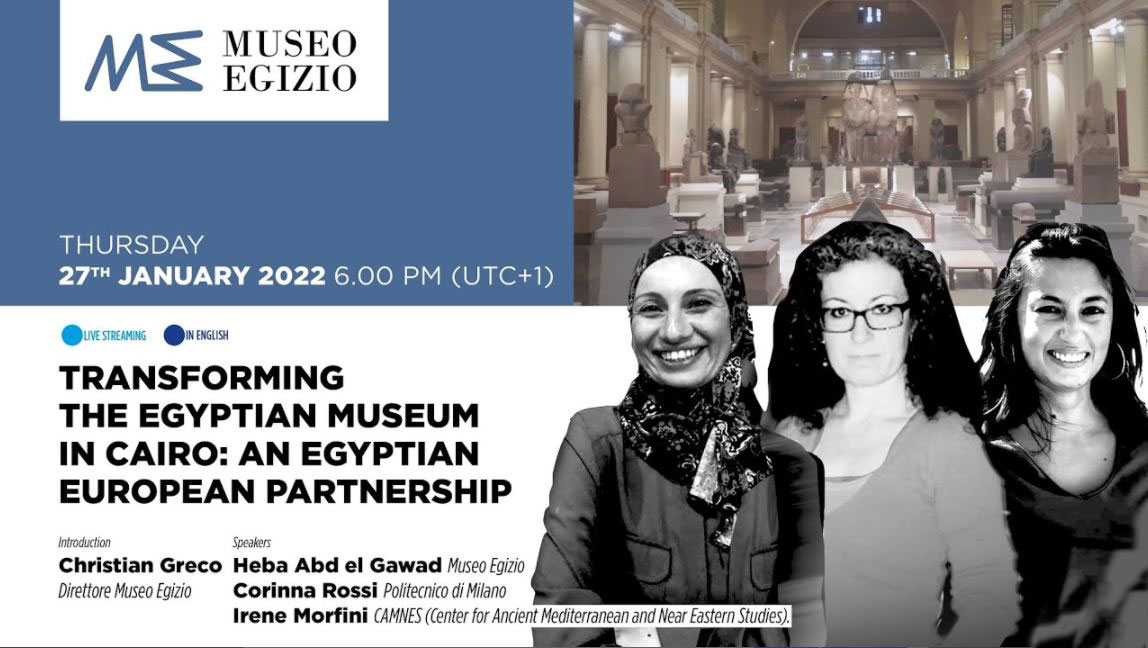 Transforming the Egyptian Museum in Cairo: An Egyptian European Partnership

Transforming the Egyptian Museum in Cairo: An Egyptian European Partnership is a lecture presenting updates on the masterplan in support of the re-organisation of the iconic Egyptian Museum in Cairo’s Tahrir square, following the reallocation of much of its content to a number of new museums in Cairo and around Egypt.  The lecture is organized by the Museo Egizio in Turin and forms part of the Museo e Ricerca events’ series.

The project Transforming the Egyptian Museum in Cairo saw Museo Egizio leading a consortium of European museums including the Ägyptische Papyrussamlung of Berlin, the British Museum, the Louvre and the Rijksmuseum van Oudheden of Leiden to draw a compherensive masterplan to support the re-organisation of the iconic Tahrir museum. The forthcoming opening of the Grand Egyptian Museum and of other regional museums in Egypt caused a re-distribution of the objects that affected the old display of the Egyptian Museum. This situation represented a chance to think of the future of this museum and to identify suitable directions of development in a coordinated way. In order to test and apply the selected criteria, each museum participating in this project was assigned a gallery to be partly refurbished and Museo Egizio focussed the Old Kingdom section. Heba Abd el Gawad, Irene Morfini and Corinna Rossi will present the work that is about to be completed, the challenges that this project had to face, the criteria that were identified to suggest the project of re-display, and the preliminary results of the conservation carried out on select objects.

Transforming the Egyptian Museum: About the Speakers

Egyptian Egyptologist Heba Abd el Gawad is Museo Egizio curator and scientific coordinator for the Egyptian-European project funded by the EU “Transforming the Egyptian Museum in Cairo”. She has previously led various curatorial roles in the UK including co-curating Two Temple Place’s 2016 Beyond Beauty: Transforming the Body in Ancient Egypt exhibition, project curator of the British Museum’s Egypt and Sudan department: Asyut Project, and the Egyptian Museum in Cairo researcher for the British Museum’s Greece and Rome department: Naukratis project. More recently, she has guest curated Listen to her! Turning up the Volume on Egypt’s Ordinary Women exhibition at the Petrie Museum of Egyptian and Sudanese Archaeology.

Corinna Rossi is Associate Professor of Egyptology at Politecnico di Milano. She graduated in architecture in Napoli (Italy) and specialised in Egyptology at Cambridge (UK), where she completed an MPhil and a PhD and then became a Junior Research Fellow at Churchill College. Her main topic of research is the relationship between architecture and mathematics in ancient Egypt. She co-funded and co-directed the North Kharga Oasis Survey together with Salima Ikram and is currently the Director of the Italian archaeological mission to Umm al-Dabadib (Kharga Oasis). She is a team member of the Italian-Dutch mission to Saqqara of Museo Egizio, Torino and Rijksmuseum van Oudheden, Leiden and of the joint IFAO/Museo Egizio mission to Deir al-Medina. She is the director of the EU-funded project LIFE (Living In a Fringe Environment), centred on the archaeological site of Umm al-Dabadib, based at Politecnico di Milano and in partnership with Università degli Studi di Napoli Federico II.

Irene Morfini, Egyptologist and Archaeologist was born in Lucca (Italy). She graduated in Egyptology both at the University of Pisa (Italy) and at the University of Leiden (The Netherlands). In 2019 she obtained her PhD at the University of Leiden under the supervision of Dr. Demarée with a thesis on the administrative records of the village of Deir el-Medina. She participated in numerous excavations in Italy since 2000 and in Egypt since 2007, first in the Tomb of Harwa (Luxor) and then in Saqqara. Since 2013 she is co-director of the Min Project in Luxor, working in the tomb of Min. Since 2011 she has been vice-president of the Canarian Association of Egyptology carrying out research, study and dissemination of knowledge in the field of the archaeological, historical and scientific heritage of ancient Egypt, developing cultural projects in Egypt, Cuba and Ghana. Since 2017 she is part of the staff of CAMNES (Center for Ancient Mediterranean and Near Eastern Studies) that organized the international congress Rethinking Osiris in 2019. Since 2019 she has been working in the field for the EU-funded project “Transforming the Egyptian Museum in Cairo”, first for the National Museum of Antiquities in Leiden and then for the Museo Egizio.

The lecture is taking place online on Tuesday the 27th of January and will be broadcasted via YouTube. To access it click here. For further information, contact Museo Egizio ([email protected], +11 44 06 903 Monday to Saturday from 9:00 a.m. to 6:30 p.m. Italian time).