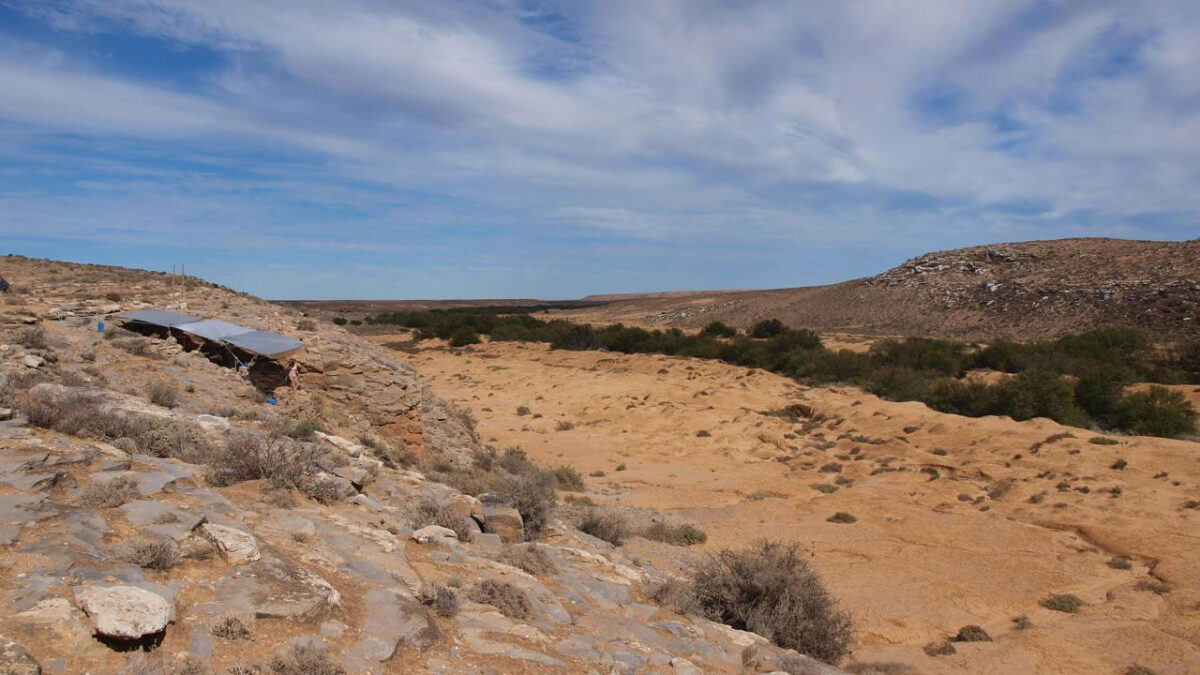 Did a Tough Environment Shape the Evolution of Human Creativity?

Humans Innovated to Adapt to African Desert Life 80,000 Years Ago

Between the time when early modern humans emerged in Africa and when they spread around the globe, they developed complex behaviors that enabled them — and us — to adapt and thrive in new environments.

Those behaviors — toolmaking, thinking and planning — evolved during the Middle Stone Age (315,000-40,000 years ago), but our current understanding of where, why and how the behaviors arose relies on spotty archaeological evidence. The Middle Stone Age in southern Africa is best known from famous sites along the lush southern Cape Coast, such as Blombos Cave. But new research suggests people in the overlooked desert regions to the north sometimes lived very different, and in some ways more creative, lives.

In an article in the journal Nature Ecology & Evolution, Alex Mackay of University of Wollongong in Australia, Teresa Steele, professor of anthropology at University of California, Davis, and colleagues report that 80,000 to 92,000 years ago people occupying a site in the Knersvlakte region of southern Namaqualand, in what is now South Africa, were innovating in multiple ways, including:

-Transporting mollusk shells an unusually long distance from the coast

-Producing technology from ostrich eggshells, their first known use as a medium for creativity

These innovations, found at the Varsche Rivier 003 site, are not present in sites just 65 miles (100 kilometers) to the south, demonstrating a lack of connections between these contemporaneous populations.

“It might be adaptations in these periods of isolation that helps motivate innovation,” said Steele. However, Steele noted that a few thousand years later after a climatic shift, the occupants of Varsche Rivier 003 and the sites to the south began making the same stone tool industries, highlighting a change toward connections across wider geographic regions.

Steele and her colleagues began excavations in 2009 at the site of an ancient rock shelter in the arid Knersvlakte, a bioregion best known for its quartz-gravel plains and endemic dwarf succulents, situated 27 miles (44 kilometers) east of South Africa’s Atlantic coast and 185 miles (300 kilometers) north of Cape Town.

Artifacts from the site date to a climate shift beginning about 92,000 years ago, when milder winds and increased summer rainfall made the region more hospitable to humans. After a few thousand years, the climate changed back to more like today, with most of the region’s 7 inches (175 mm) of average annual rainfall occurring in the winter.

But even during the climate shift, the Knersvlakte was a marginal environment, Steele said. “It was a tough place for hunter-gatherer-herders to make a living, even recently. Even when there was a little bit more moisture on the landscape, it wasn’t lush by any means. The fact that people 80,000 years ago could thrive there tells us something about human adaptability,” she said.

More research is needed to reconstruct climate change in the region in the past and to shed more light on how the environment shaped innovation and culture, the researchers said.

Co-authors of the paper include UC Davis anthropology graduate student Patricia McNeill, who started with the project as a UC Davis undergraduate, and graduate alumnae Naomi Martisius and Susan Lagle. Martisius is now a postdoctoral fellow at the University of Tulsa in Oklahoma, and Lagle is a Fulbright postdoctoral fellow at the University of Haifa in Israel.

Other co-authors are Simon Armitage of Royal Holloway, University of London; Elizabeth Niespolo and Warren Sharp of Berkeley Geochronology Center in Berkeley, California; Mareike Stahlschmidt of the Max Planck Institute for Evolutionary Anthropology in Leipzig, Germany; Alexander Blackwood of La Trobe University in Bundoora, Australia; Kelsey Boyd and Corey A. O’Driscoll of University of Wollongong; Brian Chase of University of Montpellier in France; Chester F. Kaplan of Cape Town, South Africa; Marika A. Low of Blackheath, Australia; Ian Moffat and Rachel Rudd of Flinders University in Bedford Park, Australia; and Jayson Orton of ASHA Consulting and the University of South Africa.

The research received primary support from the National Science Foundation, the Leakey Foundation and UC Davis, as well as the Australian Research Council, the University of Wollongong and the co-authors’ organizations.