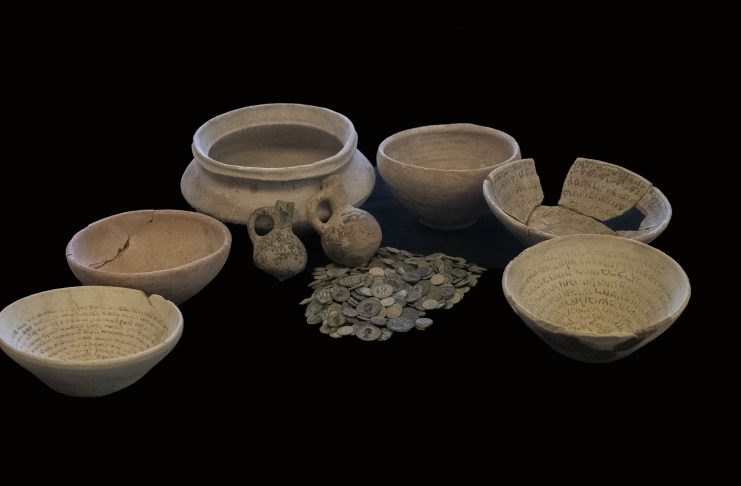 Ancient magical bowls uncovered in the home of a Jerusalem resident

Ancient magical bowls, carrying spells and incantations in the Hebrew script, uncovered in the home of a Jerusalem resident.

Hundreds of ancient finds, including rare bone and ivory artifacts from the biblical period, were seized during an operation by the Antiquities Authority’s robbery prevention unit and the Lev HaBira police against a Jerusalem resident suspected of illegal trade in antiquities.

Rare and decorated bone and ivory items from the biblical period and ancient bowls dating back some 1,500 years, bearing spells and incantations in Hebrew, were uncovered in the home of a resident of the Ramat Shlomo neighborhood of Jerusalem, suspected of illegal trade in antiquities. Hundreds of antique coins, glassware, and weapons were also discovered during a cooperative search by the Antiquities Authority’s Robbery Prevention Unit and Lev HaBira police.

The incantation bowls, known as the “swearing bowls,” were used as a kind of amulet in ancient times and dated back to the 8th-4th century CE. It was common practice to bury them under the house floor for protection.  Inside the bowls, magical inscriptions were written in the Babylonian-Aramaic language. The inscription in the bowl is meant to fight curses, demons, diseases, and pests.

According to Amir Ganor, head of the Antiquities Authority’s Robbery Prevention Unit, “bowls of this type came from ancient sites in the area of Mesopotamia, now present-day Iraq. According to their personal needs, the text was written by artists for a specific client. Occasionally, as can be seen in one of the bowls, a figure of the “night” demon was painted in the center of the bowl, representing the individual that the bowl was meant to ward off. In 2003, following the war in Iraq, thousands of stolen “incantation bowls” began to enter international trade markets.”

The Israel Antiquities Authority believes that the suspect repaired the bowls and restored them to put them up for sale. Besides the antiquities, various chemicals were seized in his house, which were allegedly intended for the restoration of the pottery, as well as for cleaning ancient metals and coins.

In addition to hundreds of coins, rare items from the biblical period were discovered in the suspect’s house – bone and ivory objects decorated in Phoenician style, with Egyptian motifs, that included scenes from the animal world, alongside geometric ornaments. In one of the objects appear two griffons – winged lions whose face is human, facing each other. The second artifact included a description of a convoy of four-winged lions marching one after the other. Similar ivory objects have been discovered in past excavations in an antiquity site in Samaria, where a large collection of ivory – known as “Samaria Ivories” was discovered – as well as at other antiquity sites such as Tel Megiddo. These are decorative items that were attached to wooden furniture by nails in the 9th and 8th centuries BC. Finding decorated artifacts made of ivory from this period is extremely rare, and the assessment at the Antiquities Authority’s Robbery Prevention Unit is that the artifacts were excavated illegally in one of the biblical mounds in Samaria or in Northern Israel.

“Antiquities belong to all of us. They are our heritage.” Says Eli Eskozido, Director of the Israel Antiquities Authority. “Unauthorized antiquities dealers encourage looters to go out and destroy ancient sites in search of finds for sale on the antiquities market. In the name of greed, they plunder antiquity sites, removing the finds from their historical context, thus obscuring parts of human history”.

Documents were seized in the suspect’s home to shed light on his connections with antiquities robbers and unauthorized dealers. Following the investigation of the suspect, the Antiquities Authority inspectors arrived at an auction house in the central area, where they seized additional ancient artifacts that had been put up for sale by the suspect in violation of the law.

Ancient weapons, glassware, and bronze and silver coins were found among the finds.

At the end of the investigation, the case file will be transferred to the Antiquities Authority Legal Bureau to examine the filing of an indictment concerning the attempted trade in antiquities without a permit, failure to report the discovery of an antique, failure to register a collection and possession of property suspected of being stolen – criminal offenses, for which the statutory penalty is up to three years in prison.

NOTES
1. The Friends of the Israel Antiquities Authority, https://www.friendsofiaa.org/news/2022/3/7/ancient-magical-bowls-carrying-spells-and-incantations-in-the-hebrew-script-uncovered-in-the-home-of-a-jerusalem-resident